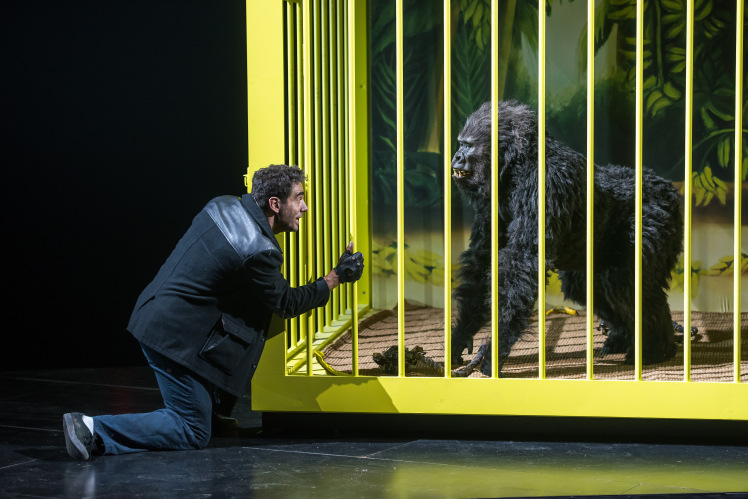 He Says: The Hairy Ape Spinning Out, Caged

He Says: The Hairy Ape Spinning Out, Caged 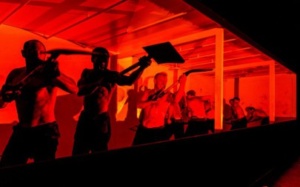 The streets that haunt the soul of the bewildered Yank are where this exceptional revival of Eugene O’Neill’s The Hairy Ape finds itself expressionally planted. Intensely staged most beautifully by director, Richard Jones (Broadway’s La Bête) and designer, Stewart Laing (Broadway’s Titanic) in the majestic and cavernous Park Avenue Armory, O’Neill has never felt so unique and powerful. The two work quite dramatically together creating something unlike anything I’ve seen before. The Hairy Ape, performed on a rotating donut shaped circle with us spectators dropped in the middle, follows the unraveling of a beast of a man, Robert Smith. ‘Yank’ as he more commonly is referred to as, loses his sense of self in a dramatic collision, sending him spiraling off, quite literally on a provocative hopeless journey for revenge that takes him from his place of ownership, the stokehole of an ocean liner to the streets of Park Avenue, New York City. 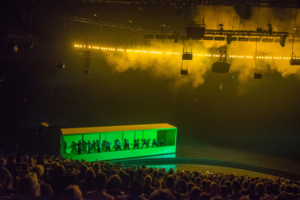 An impressive tableau rotates out from behind us when the play begins, showcasing a cage full of dirty tired workers in-between shifts stoking coal into the engines of a ship. Within this confined space, Yank is king. He knows himself, and is one with his role and environment. Lit with the strong colors of yellow, green and beyond (lighting designer: Mimi Jordan Sherin), they are thrashed and thrown with the rocking of the ship, and by the ever-changing dynamics of self and worth. Yellow, the dominate accent color in both lighting and props arises from Yank’s ultimate put-down of men who disagree or for those who don’t belong. All who question Yank’s view of oneness with the ship are ridiculed, called yellow, and beaten down. Paddy challenges Yank’s thinking with a more organic viewpoint of sail boats versus steam engines. David Costabile (Titanic, Caroline, or Change) is wonderful as this old timer but he is in no way a challenge to the machine driven masculinity of Yank’s view. The choreographed visuals (exceptionally work by choreographer, Aletta Collins) and the stilted dialogue that in no way is meant to appear as natural or realistic (dialect coach: Kate Wilson creating something intensely unique) offer us a powerful descent inside the hearts and souls of these worker men. A fascinating footnote is that the dialect is written into the script, making it, as I’m told by a fellow theatre junkie, “a tough read but awesome out loud”. The ever-changing stylistic sounds, colors, and landscape only enhance the expressionistic approach to Yank’s world, and his eventual fall from the steadiness of his self-worth. 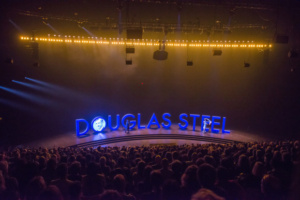 Bobby Cannavale (Glengarry Glen Ross) seems to be born to play this prototype to all the brutes that Cannavale seems to play. He dives into this abstract world, grabbing up the intensity and shoveling it into our hungry faces. Brought down from his pillar by one shriek of a rich young woman, Mildred Douglas played aggressively and magnificently by Catherine Combs (Ivo Van Hove’s A View From the Bridge) who naively, wants to see how the other half lives.  In a very impressive scene with Mildred leading up to the encounter, Becky Ann Baker (Good People) as her chaperone aunt, stoically tells us everything O’Neil thinks about the Upper Class of Manhattan, and than some.  It is the grandness and the oppressiveness over others, mixed with the disregard and the judgment of the wealthy, in essence, that has the power and the weight to bring down a physically strong man like Yank. 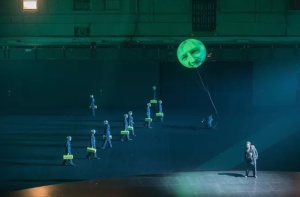 After being bombarded by the judgment of Mildred, Yank scrabbles around trying to understand her shriek and the revulsion he sees in her eyes before she is carried away to ‘safety’. The horrific cry of a spoiled young woman becomes Yank’s Achilles Heel, destroying his solidness and forces him down to his knees like the animal she saw. He becomes obsessed to find her; to seek her out in New York City in a desperate attempt to resurrect his now-tortured sense of self.  The landscape of the rich is expansive and impressive, envisioned in large three-dimensional letters epitomizing strength and power and overwhelming to Yank. The New York scene expands the stage, impressively taking in the whole structure of the Armory in an eye-popping vista that is the extreme opposite of Yanks small enclosed cell on the ship. It’s a miraculous use of space. The production gives us grand visuals of parading wealthy socialites masked in uniformity, marching identical workers with yellow lunch-boxes, and drunken revelers tugging along the man in the moon, all in an impressionistic canvas highlighting the discrepancies of our society and Yanks utter loss. Dodging punches with ease (fight director: Thomas Schall doing great work), the upper class of New York casually erase all that Yank believed gave him power with a simple “I beg your pardon”, finding himself tossed into a jail cell even smaller than one he reveled in onboard.

The environmental production is a non-stop wonderland of visuals and metaphors, filled with color and sound (composer/sound designer: Sarah Angliss), leading us to the inevitable confrontation with The Hairy Ape and the gorilla (Phil Hill). It’s a fitting and powerful end to an impressive piece of stagecraft and artistry. These are the unique moments that us theatre junkies live for. I’m not sure what Yank would think of us (although I have a pretty good idea), but O’Neill has never been seen in this harsh yellow light before by this theatre goer. The color of cowardice and fear is used powerfully in this production, as the color that is caging people in, beating people down, and the color of the programs in our hands and the seats we sit in; painting us as complicit, especially as we exit the armory onto the same streets O’Neill is brutally sending up. It’s a challenging and miraculous in-your-face spectacle, filled with beauty, intelligence, and exploration, with a layer of judgment.  How will we react?