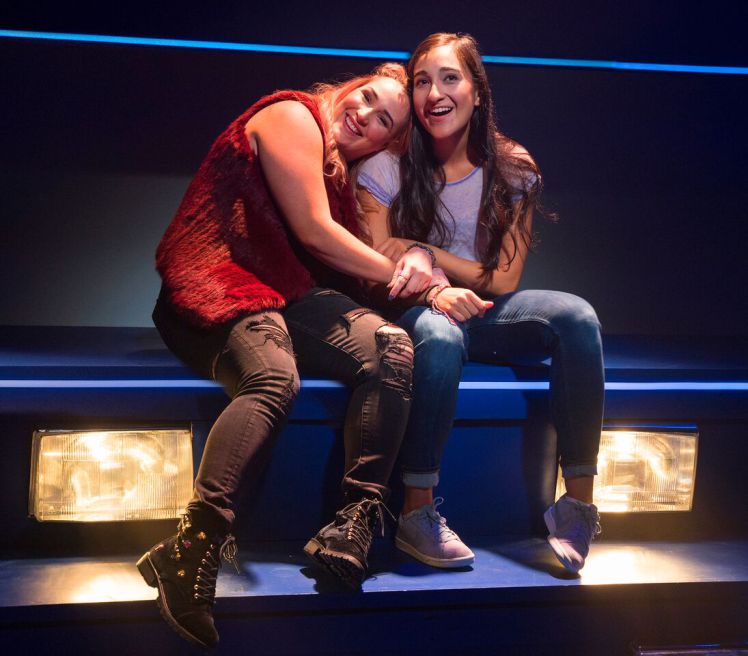 He Says: The Mad Ones A Surprising Shotgun Passenger on the Journey Forward Into Life

He Says: The Mad Ones A Surprising Shotgun Passenger on the Journey Forward Into Life 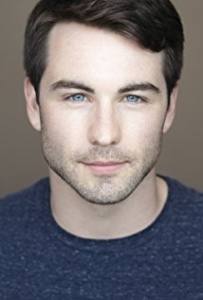 I was looking forward to The Mad Ones, Prospect Theater Company’s new musical currently rocking the 59E59 Theaters to its knees. I had heard rumors of greatness and creativity within Kait Kerrigan and Brian Lowdermilk’s musical creation, so I was a tad disappointed when I got an email on the day I was scheduled to review it that one of the actors, Jay Armstrong Johnson (Broadway’s On The Town) wouldn’t be appearing in the production that evening; a one off occurrence. Naturally for a review, I prefer to see the original cast members, but for me to change which performance I attended was more complicating with Thanksgiving almost upon us, than just going forward and living within what the world was handing me. 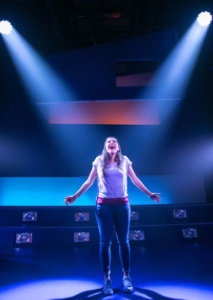 To be honest, it’s always somewhat of a thrill watching an understudy tossed into a show at the last moment. The theatre is jolted awake with anticipation, but I have always loved how an audience whole heartedly embraces the replacement, even as the wave of disappointment is felt floating through the air of the theater. Years ago, Idina Menzel sat out the second act (the one and only performance she did such a thing, and it was clear in Act I that she was struggling, sick with the flu) of If/Then.  I knew the moment it was announced as we sat back down in our seats for the last act I’d have to return another time to see her and the show from beginning to end, but it was also exciting to watch the understudy grab hold of the reins and deliver the show forward to the end. She was astounding, doing what she did at a moments notice, and what a standing ovation she was rewarded with, by us and her cast mates. It was awesome. 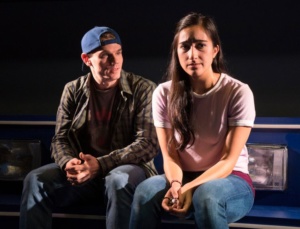 On this one particular night, the brave replacement, Ben Moss (Vineyard’s Arlington) who only had about 24 hours to prepare, stepped onto the stage to perform the part of Adam, and he was a natural in the part.  Such a professional, I was so impressed. A family emergency I believe is what caused Johnson to call out on such short notice, but as it turns out, much of The Mad Ones is really about just that; fearlessly seizing the day, and driving audaciously forward in search of something new and surprising. Moss did just that. He set aside his fear, just like they preach in this show, and stepped forward into the blinding light of the unknown. He joined this formidable cast on stage, with script in hand and his courage in fourth gear. Together, the four pros all did the impossible with force and unity. 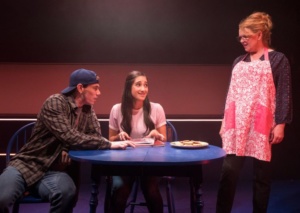 Her plan keeps Sam sitting close by, basically in the passenger seat of her car. Kelly wants to drive them into a life where the two stick together at a college close by. Kelly seems to need her (although she might not admit it so easily), as much as Sam needs Kelly’s impulsiveness and aggressiveness. Staying for Sam feels comfortable and safe, living a life connected to Kelly. This life although sounding sweet and easy, is not entirely what Sam dreams about, even if her dream’s details are masked in fog. But life has a way to throw a wrench into Sam’s slow and confused drive forward, and that blow forces her off the path to idle on the road’s shoulder, desperate to see through the fog. And that curve ball, although thrown out pretty early on by the hilariously pushy Kelly, is the engine behind this whole musical journey, and the emotional sentiment that colors the view from the driver’s seat. 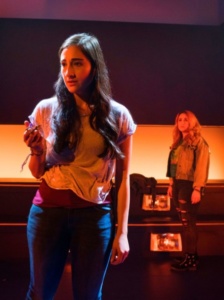 Krystina Alabado and Emma Hunton in Kait Kerrigan and Brian Lowdermilk’s The Mad Ones at 59E59 Theaters. Photo by Richard Termine

But let’s not forget about the boy, her high school sweetheart Adam. With his love thrown into the swirl, The Mad Ones feels more solid, although slightly less complicated. Even with Moss standing there with the musical’s book in his hands, the setup between these two is emotionally clear. Moss does an incredible job bringing this performance to us with an emotional purity and pointed intention, and even with the one lyric flub, beautifully handled by the actor and greeted with a warm encouragement from the crowd, their love is sweet and pure. Clearly, he is not daring enough for the perplexed Sam. We all know this from the beginning, but Moss gives Adam just the right amount of lovable affectations that we do secretly cheer for him, even knowing he’s not the right shot-gun passenger for Sam to drive away with.
The premise is striking and very uniquely investigated within the smart book and songs by this fantastic writing team (musical director: Paul Strobe). The numbers are powerful and fantastically crafted and performed, but the intricate details become a bit foggy as the piece accelerates forward. The songs, although majestically sung start to blend into one another, losing the distinction of meaning and purpose between them. The two females at the helm, and also a mother that can certainly match their vocal chops, do their best selling song after song but the unique matter in which they are trying to explore beyond the one conflict doesn’t register. There doesn’t feel like a building or any side roads taken. The two young women sing of living and driving down roads you never have traveled down before, and the two are incredible but the songs start to sound familiar, a bit like a slice of Rent or Next to Normal have floated in on the airwaves of the car radio. Both not terrible shows to be compared to, but it starts to sound like a form of denial. Maybe, if they keep singing the same song over and over again, Sam wouldn’t have to make any decision about her future, and that impending phone call, the one we hear about that wakes Sam up, will never need to be answered.
Kelly wants life with no road maps spread out before them, but when the choices are clearly only Sam’s to make, some sort of map will eventually have to be created. I wish Kerrigan and Lowdermilk had envisioned a slightly more detailed map for the journey they forged for us. The team needed to plan out a few alternate roadside stops constructed with a different sound or a more nuanced feeling. With a few more creative rest stops and landmarks to see along their highway. With those side steps, a greater and far more interesting drive would have been given to us. As written, it’s still an impressive venture and one we were glad to go on.  This writing team is definitely one to watch, and let’s give it up one more time for the brave Mr. Moss, who so miraculously joined this magnificently gifted cast on their journey to the future.
For more go to frontmezzjunkies.com
Related ItemsBen MossBrian LowdermilkKait KerriganNewProspect Theater CompanyRossstephen brackettThe Mad Ones
Off Broadway