He Says: The Movie Musical: Hello Again, and Ronde and Ronde We Go

He Says: The Movie Musical: Hello Again, and Ronde and Ronde We Go

Arriving into selected movie theaters nationwide, Hello Again, a movie musical casually based on the 1897 French play, La Ronde by Arthur Schnitzler is a bit of a frustrating nut to crack. Being very familiar with the play (it was done by the senior year when I was a young theatre production major at York University, Toronto) , this musical adaptation which first premiered Off-Broadway in 1993 with music, lyrics and book by the always fascinating Michael John LaChiusa (The Wild Party), plays out in the same daisy-chain staircase manner as expected. It climbs and climbs up the social ladder exploring sexual conquests and how seduction changes as we ride up the hill from street-walking prostitute to powerful senator and how quickly we drop back down in the end. 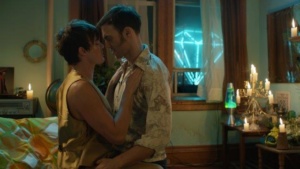 Sounds like a great success to me and a show I wish I had seen, but maybe, after seeing this movie version, the stage is where this show is meant to be because the film, Hello Again, as directed by Tom Gustafson (“Mariachi Gringo“) and written by Cory Krueckeberg (“Getting Go“), doesn’t give us much to be excited about within the climb. It ladders upwards giving us some glorious moments, but chutes back down just as often. I felt like I was playing that classic 1978 board game, ‘Chutes and Ladders’. And oddly enough, many scholars claim that the board game is basically a metaphor for morality choices and life in general. The “Emotion” interpretation of the game leans towards a concept that the ups and downs represent various emotional highs and lows that one goes through in life. In Hello Again, we are definitely playing that game from one musical moment to the next. The highs and lows though aren’t morality or emotionally based, but tend to represent excitement levels in song and engagement more than anything.

The story focuses on a chain of sexual encounters and love affairs among ten characters exploring sexual morals and class ideology. LaChuiusa has set each of the ten scenes of the musical in a different decade of the 20th century and most fascinatingly, in a non-chronological order. This gives him plenty of opportunity to utilize and play with numerous different styles and sounds of music from opera to 1990’s pop, although this structural device somewhat makes the overarching link between scenes more confusing and nonsensical. There is an attempt to have a jeweled thread bind the piece together but it is not consistent or focused on enough to even make a dent in tying these ten stories together as we come full circle.

One big plus is that gender is less structured in the musical, and even more so in the movie. The stage musical only altered the gender of Schnitzler’s “Little Miss” to the sexually ambiguous “Young Thing”. It does seem that within the writing of the adaptation the “Young Thing” played in the film by Tyler Blackburn (“Pretty Little Liars“), the status structure of the French play is thrown overboard just a bit.  In the play, each scenario ricochets up the status ladder one step at a time. But in the musical, the inclusion of the “Young Thing” doesn’t hold the form true. It bounces down and then back up again in status as the seduction stories gamely move forward. This is no great criticism of the whole, but it does alter the discussion of what status does to love and seduction that the play boldly puts forth.  In the movie musical, maybe beauty (and Blackburn certainly is a 1976 beautiful young disco thing falling into the Velvet Goldmine-esque bed of Cheyenne Jackson) is it’s own modern form of status and needs to be taken as seriously as profession and wealth.

In the movie, quite ingeniously, “The Politician” is now a powerful female Senator, played by the brave and willing Martha Plimpton (Broadway’s The Coast of Utopia). No longer is the character holding the upmost status a male (Bravo!), adding on to the fascinating structure that showcases male dominance in the pairings early on that transitions to female dominance in the latter pairs. In addition, giving the final most powerful pairing of all the groups to two strong females, the film brings in a more sexually fluid aspect to both the Senator, and the prostitute she goes to bed with. Played by the beautiful Sam Underwood, best known for Fox’s “The Following“, he, as Leocadia, starts off the proceedings, doing fairly well portraying a sexually ambiguous ‘female’ “Whore” in 1901 seducing the handsome young “Soldier”, Les, portrayed by Nolan Gerard Funk (“Glee“, Broadway’s 2009 revival Bye Bye Birdie). But Underwood finishes and completes the “Ronde” as the more believable sexy and handsome glam-male prostitute hired to fulfill the “Politician’s” fantasies, and in that moment, he is glorious. It’s a wonderful play on gender fluidity, sexual orientation, and various modes of beauty and masculinity in the non-binary form.

Most importantly though, getting past the pretty boys, is the one magnificent star performance by six time Tony winning Audra McDonald (Broadway’s Porgy and Bess, Ragtime) who changes everything in two solid scenes. Her 1990 pop song, “Beyond the Moon“ takes us back to that time-frame when Cher’s hit, “Believe” was the song of the summer, and after astounding us by turning that silly song into something special, she follows that moment with a more Audra-esque “Mistress of the Senator” opposite the 1989’s Senator Plimpton. It’s gorgeously performed and heartfelt making everything else we have just seen and heard wilt in comparison.  I called Plimpton brave earlier in this review because, my gosh, what would it be like to have to follow Audra McDonald with a song of your own, “The Bed Was Not My Own“.  Plimpton does well, but really, does that seem fair to her, or anyone for that matter?

There are a few other solid renditions by the ever-so-talented Cheyenne Jackson (Broadway’s Finian’s Rainbow, Xanadu), and Glee’s Jenna Ushkowitz (Broadway’s Waitress) as Marie, the “Nurse” seducing Calderon’s “College Boy” with the bad ankle. Unfortunately the rest of the numbers fall into the ‘fine to mediocre’ category. There are a few cases of stunt casting with one famed offspring, Rumer Willis (Fox TV’s “Empire“) as Emily, the “Young Wife” doing quite well with her complicated scenes and songs. Her voice is fine, but in regards to her acting chops, she is definitely one of the surprises. T. R. Knight (MCC’s Scattergood) as Carl, the “Husband” does a dull Matthew Broderick impression along side his “Young Wife” (one of the more complex couplings of the whole lot), but manages a bit more passion in the musically unmemorable gay Titanic moment, “Listen to the Music“, struggling in 1912 to connect with the “Young Thing” before everything comes to an end.

These ten souls want, but can’t receive the love and attention that is in the air. It’s just a quick moment of fantasy intimacy and attachment and then it is off to the one they think they truly desire. It’s a sad story we all know but hate to admit to, especially if we’ve ever dated in the competitive world of New York City. Schnitzler, when writing the play La Ronde, was mostly interested in presenting a cynical view of sexual relationships and how they often rest in hypocrisy, leaving the lovers unsatisfied, and LaChuiusa doesn’t venture too far from the same ideas. The ten all do their damnest roping us as if we are their prey out on a romantic date, selling us their story and their song while possibly already desiring the next. It’s a troubling state of affairs, but had each scene succeeded, building the case of hypocrisy within the seductions, a better film could have been created. In the infinitely wise words of my viewing companion, “If everyone was as compelling or as interesting as Audra, this movie would be great”, but as a full length musical film, it wavers more then it rises. Like Shutes and Ladders, it’s an uphill battle and a downhill slide to get to the finishing line: a bit frustrating but a fun way to spend a few hours, that is if you like playing this kind of game.