He Says: The New Group/Vineyard’s Daddy Stages a Poolside War for Control of a Young Artist’s Soul 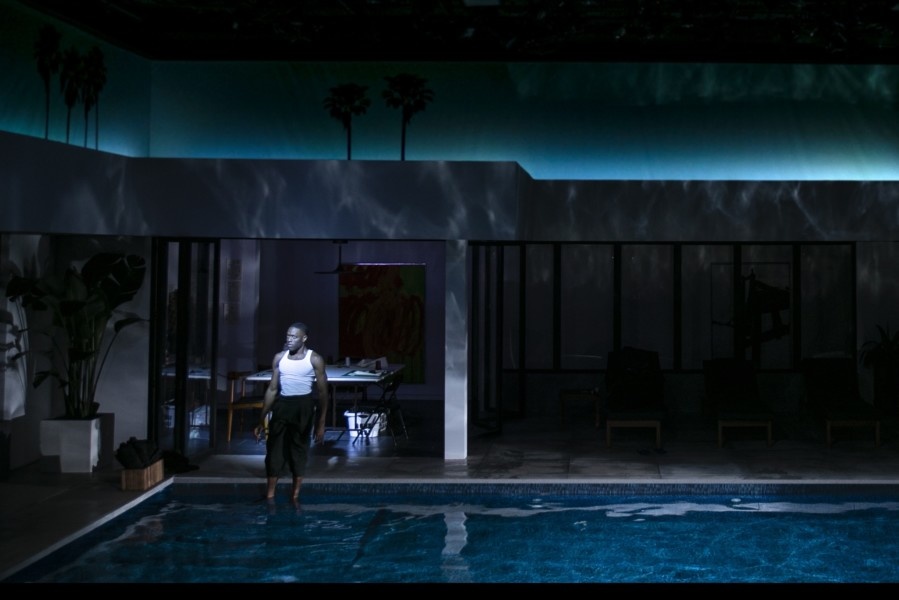 He Says: The New Group/Vineyard’s Daddy Stages a Poolside War for Control of a Young Artist’s Soul

After the “stunningly combustible and disturbingly erotic” The Slave Play written by the young new comer, Jeremy O. Harris at the New York Theatre Workshop earlier this season, the exciting splash that I was expecting with his searing new play, the divinely intriguing Daddy, arrives full force, overflowing with money’d privilege and youthful naked beauty with the first dive into the spectacle of a decadent swimming pool gracing the Pershing Square Signature Center Linney Courtyard Theatercenter stage. The design, by set genius Matt Saunders (LCT’s Pipeline), with strongly dynamic lighting by Isabella Byrd (NYTW’s The Light Shining in Buckinghamshire), and sound design by Lee Kinney (PH’s The Light Years), screams softly like aquatic waves riding up against the walls of Daddy‘s time and place with a sexual force, plowing into the front row with pure unadulterated abandonment. There is no ignoring that we are a the glorious Bel Air estate, where art and sophistication are on almost feverish display. Rooms filled with Basquiats battling it out in a conversation that is overwhelming and ridiculous, minimizing each other with the price tags of glory. It is the gorgeous home of high-end art collector Andre, played with dark and emotionally tense delicacy by Alan Cumming (Broadway’s Cabaret), fantastically engaged and fearless.  We find ourselves bathed in moonlight, hunger, and envy, just like the young black artist, Franklin, played with wild anticipation and thirst by Ronald Peet (EST’s Spill). He pulls himself out of the warm salt water pool, drying himself with lush towels, and gazing with buzzy excitement at the pricey art on display, casually but demanding our respect and attention. He’s speedy with adrenaline, running and touching all to see if it’s real or imaginary, just as Cumming’s Andre hops forward with excitement, a father figure ready to take on the world all for this young man’s steady gaze.

It’s a wildly engaging opening, pressing forth an idea of what is to come as their drug fueled passion accelerates the self-described melodrama forward. Power plays are rampant, and envy and lustful indulgences are heightened, especially within the wide eyed minds of Franklin’s close friends. Max, aggressively played to perfection by Tommy Dorfman (Netflix’s “13 Reasons Why“), is overwhelmed and angry, fighting the tantrum that is building inside. Bellamy, hilariously embodied by Kahyun Kim (STARZ’s “American Gods“) can’t believe what Franklin has fallen into, embracing and ranting in her own self-obsessed manner, kinder but challenged in her own marvelous right, as they take in the sun and the fortune from poolside. The conflicts proposed offer a lot of hard reactions and demands; to love, labels, and sex with an older gay man, like Andre. It’s especially difficult to take in the dynamics for an older gay man like myself, who hates the title that some would like to apply, but understands its position in the gay world diorama. Franklin struggles as well as he drinks Andre’s champagne and descends quickly into an irresistible and complicated bond with an older wealthy white art collector who could easily change his life by swimming in his privileged blindness. That’s all Daddy wants, gainfully presented courtesy of intimacy and fight direction by Claire Warden and movement direction by Darrell Grand Moultrie, but he has a few commandments to be followed by the self-titled “son”, with titles and positions to be adorned and accepted.

It’s Daddy issues galore, piled up on top of one another by Harris, playing with the obvious and stereotypical while dabbling the droplets of decadence off with originality and foreboding energy of something disastrous on its way.  The first of three acts within the gleefully overstuffed Daddy is gifted with a treasure trove of spectacularly well written dialogue interactions, and as directed with a sharpness for conflict and abstractionism by Danya Taymor (LCT3’s Pass Over), the fantasy and the real conflict are both stitched, sung, and sewn beautifully beneath the blue skies in and out of the inviting water. All feels good as Franklin moves quickly indoors and across town, setting up his baby doll art studio just weeks before his debut at the gallery run by the gloriously excitable Alessia, portrayed with a detailed outrageousness that works wonders by Hari Nef. Alessia is overwhelmed by his connection to the wealth and power of art collector Andre, and marvels at the dynamic shift of Franklin’s baby doll art, but another shift is coming in on the winds from far away. We see it floating at the water’s edge, calling in and leaving a subtle warning on Franklin’s voicemail. Zora is coming, his Christian single momma, prickly played with intensity by Charlayne Woodard (Public’s Hamlet) and she, sensing spiritually that her son is in peril and determined to save his soul from some unspoken darkness that might be Cumming over him, has decided to put on her armor, and show up for the art opening ready and willing to wag war if war is required.

And so it is on once she arrives and is invited to stay at Franklin’s new digs at the insistence of Andre. So the stylist stage is set for battle, and Zora doesn’t waste any time to take her armored position against her enemy, prepared to use every motherly tactic she can. Franklin seems to be warring within himself, inside his triggered emotional mind, slapping his head back and forth between the deep seated desire for a father, and the intoxicatingly electric connection to his Daddy. The art on the walls shifts forms, the historic soul of the “coon baby” collection, designed by Tschabalala Self, grow larger and more powerfully intimate and threatening, and the collision of gospel and pop, in the symbolic form of a trio of Gospel singers; Carrie Compere, Denise Manning, and Onyie Nwachukwu, decked out in robes and culture by costume designer is Montana Levi Blanco (Public’s Teenage Dick) sing a song of historic meaning and power (Original Score and Instrumental Arrangements: Lee Kinney; Original Vocal Music and Vocal Arrangements: Darius Smith and Brett Macias; Music Supervision: Brett Macias). The layers of sun block are applied and reapplied, almost overwhelming the California sun with too many metaphors and meaning. It burns into our skin regardless, mainly due to the efforts of playwright Harris, who loves provocative notions and naked panoramas of the American soul, divesting and de-robing the ideas of gender, race, sexuality, and power, all while dangling our legs comfortably in the warm salt water pool. Let the waves lap over our skin, and take in the beauty and the complexity of an artist’s life, while enjoying the sensations being given. Just stop trying to understand and dissect each action and behavior, it’s pointless and certain ones don’t even make sense. Be warned, or else Daddy might spank you, or discard you, or worst off, both.