He Says: The New Group’s Cyrano Embraces Beauty over Poetry 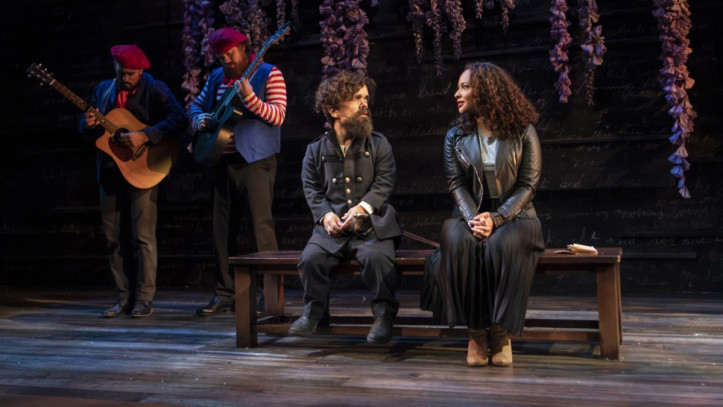 He Says: The New Group’s Cyrano Embraces Beauty over Poetry

Oddly enough, or maybe appropriately (I’m not quite sure), all I could think of when The New Group‘s Cyrano, a fine but slightly distancing musical version of the classic tale adapted and directed by Erica Schmidt (Red Bull’s Mac Beth) from Cyrano de Bergerac by Edmond Rostand, began was of Moulin Rouge, the Musicalup town on Broadway. There’s this imposing rich Duke, by the name of De Guiche, played determinedly by Ritchie Coster (Public’s Julius Caesar) who’s in love, or should I say, wants to possess the beautiful red dressed Roxanne, played purposefully by Jasmine Cephas Jones (Broadway’s Hamilton). The Satine doppelgänger is secretly in love with the penniless sitar player, wait, no, I mean, soldier, surprisingly (or not so much) named Christian, played handsomely by the impressively voiced Blake Jenner (feature adaptation of “Merrily We Roll Along“), who equally loves her, even though the two have never spoken. He has nothing to offer her, except his heart and soul, not even words or poetry in this case. Luckily, he has on his side, most reluctantly, not the French painter, Toulouse-Lautrec, but the titular Cyrano, a poet and fighter, strongly and forcibly portrayed by Peter Dinklage (“Game of Thrones“).

He’s gloriously well suited for the role, taking center with a strength and gravitas that the role demands. But am I the only one, embarrassingly, who didn’t know the lineage of Baz’s maddeningly glittery and festive Broadway musical? That red dress, courtesy of the fine work by costume designer Tom Broecker (Westside’s Little Shop of Horrors) can lead one to no other conclusion. All I can say though is that I truly wish this centuries old downtown retelling of a tale about true love triumphing (eventually) over superficiality was as much fun as that uptown festive musical. Or maybe just as much fun as Grace McLean’s (Broadway’s Natasha, Pierre…) feisty and fun portrayal of Chaperone Marie, who, by the way does her job terribly but ever so deliciously, giving a certain fun zest sorely missing throughout.

With music by Aaron Dessner and Bryce Dessner and lyrics by Matt Berninger and Carin Besser, the story unfolds with great style and a strong sense of purpose, but the confusing part, at least for this soul, is that the musical layer does the opposite of what is usually intended. The actors emote gorgeously with their tender dialogue and interactions, trying passionately to engage, but when the music and lyrics swoop in, courtesy of some well constructed music supervision and arrangements by Mary-Mitchell Campbell (Broadway’s Mean Girls) and the focused work of music director Ted Arthur (Broadway’s The Prom), the emotional depth falls flat. Songs, generally, are to enhance the unspoken emotionality of the moment, giving swoon-worthy sound to an interaction that has little opportunity to express itself, but here in Schmidt’s Cyrano, the company, made up of: Josh A. Dawson (Broadway’s Beautiful) as Le Bret, Hillary Fisher (Fulton Opera’s Little Shop…) as Orange Girl, Christopher Gurr (Broadway’s Tuck Everlasting) as Jodelet, Nehal Joshi (Broadway’s School of Rock) as Ragueneau, and Scott Stangland (Steppenwolf’s The Wheel) as Montgomery, are all finding the words, poetry of love, and heartache with ease and emotional determination before the songs even begin. Making their insertion somewhat pointless, repetitive, and numbing.

Dynamically choreographed with style by Jeff and Rick Kuperman (MCC’s Alice By Heart), the movement and scenic collaborations create images of utter beauty. Matched most majestically by the gorgeously detailed, but somewhat flat scenic design by Christine Jones (Broadway’s Harry Potter…) & Amy Rubin (Signature’s Thom Pain), with strong dramatic lighting by Jeff Croiter (TNG’s The True) and an over-mic’d sound by Dan Moses Schreier (Broadway’s Gary…). It’s stunningly orchestrated. And here’s the odd part. The production begins to embrace the opposition of the intended moral of the story. It’s gorgeous and sumptuous in design, but never feels all that emotionally intimate or powerful. It’s as if, in Cyrano‘s creation, superficiality has won out, even as the cast tries with all their night to give us an intensity of emotional pain and heartbreak. When death inserts itself into the proceedings, I was not really moved, beyond thinking how beautifully and stylistically the scene was set. And for a tale like Cyrano‘s it should be quite the opposite.

“The exact measure of my love, can not be given to you in words to outlast my last breath.” Nor is it given in song. But the spoken words are pretty, the tableaux divinely constructed, and that wall, with the green flow of vegetation, sublime. I just wish, in the end, the depth of heartache and loss was able to seep out into the audience, filling us with the emotional words of a poet in hopeless love.