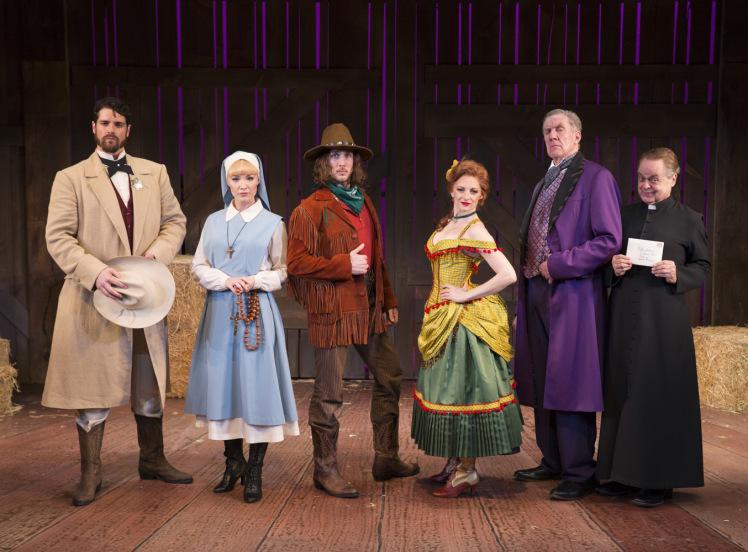 If you took a spoonful of Mel Brook’s ‘Blazing Saddles‘ and stir it into the musical, The Robber Bridegroom and mix it half and half with a smart slice of Shakespeare’s Measure for Measure, the concoction you might just create, if you’re extremely lucky, is Desperate Measures. Transferred from the York Theater Company’s small but quaint stage to the larger and more professional looking New World Stages, the hilariously silly but fun new musical which just won the Outer Critics Circle award for best new off-Broadway musical opens with a surprisingly smart and funny bang. With a book and lyrics by Peter Kellogg (Anna Karenina) and music by David Friedman (Money Talks), there is a wise and solid reason to only use the word ‘Measure’ once in the title.  It’s like Kellogg sliced away a lot of the convoluted plot points of Shakespeare’s Measure and held onto the more interesting narrative stirrings, as described most clearly in the introduction monologue.  Gone is Duke Vincento, a very central character in the Bard’s tale, who gives all his power temporarily to the strict and religious Judge Angelo, for reasons unknown. He then tells everyone he is leaving town, but stays disguised as a monk, to watch what happens. It always struck me, no matter how well a production set this up, that the Duke is sort of horrible, playing with human lives just for observational pleasure.  It never sat well with me, and I’ve seen numerous productions in the past year (TFANA, Public’s Elevator Repair) but this miraculously funny telling sits most wonderfully well indeed.

Instead of the twisted and confusing Duke, Desperate Measures gives us the noble and sweet Sheriff Martin Green, played to perfection by the very handsome and rugged Peter Saide (OYL/59E59’s Skin Tight). He’s got the looks and stature of the leading man cowboy sheriff, combined with a wonderfully rich and beautiful voice, most notable in his song, “Stop There”. Taking the part of Shakespeare’s pious judge, is the Governor von Richterhenkenpflichtgetruber, most expertly and hilariously portrayed by Nick Wyman (Broadway’s Catch Me If You Can).  His power isn’t given to him by another, but holds it tight and righteously over others for the pure joy of having it, just like another maliciously evil world leader today. All the while, he is being decidingly devious and authoritarian. He brings to mind the delicious Hedley Lamarr (Harvey Korman) in ‘Blazing Saddles‘,  and that is not the only one that brought that film to the forefront of my mind.

Stepping in for Shakespeare’s Claudio, is the town’s sweet, sexy, yet simple-minded Johnny Blood, played by the wonderfully voiced and acrobatic Conor Ryan (Second Stage’s Invisible Thread) a dead-ringer (maybe it’s the hair?) for ‘Blazing Saddle‘s Gene Wilder. He is wiry and ridiculously funny, especially with shots fired and a gun drop that might or might not have been planned the night I saw it. He has been jailed for shooting a man in defense of himself and the woman he loves, the Madeline Khan stand-in, Bella Rose. It’s a much more appropriate wild west scenario, than the Shakespearian pregnancy clause, and one that has a lot more fun stirred into it, evan with the muddled and overly busy opening number, “The Ballad of JohnnyBlood“. Their priceless rollicking number, “Just for You” is over the top fun, and binds them together as equal and perfect matched comedians and love partners. Bella, played by the hilarious one-half of the acclaimed and beloved comic pop-duo, The Skivvies, Lauren Molina (Broadway’s Rock of Ages) is by far the best thing in this show. She gets a grand number all to herself, “It’s Getting Hot in Here” that almost rivals Khan’s magnificence in Saddle’s “I’m Tired”. But Molina is anything but tired, her energy and charm is infectious. And that face! Priceless.

As in Measure For Measure, the jailed Claudio/Johnny needs an upstanding person to plead his case, and the noble dreamboat Sheriff goes off to find and persuade Susanna, played by the angelic voiced Sarah Parnicky, the sister of Johnny and a soon-to-be nun, Sister Mary Jo.  Without all the fuss and mess that abounds in the background of Measure for Measure (often called one of Shakespeare’s problem plays), the main scenario of Governor von Richterhenkenpflichtgetruber lusting after and demanding Susanna give over her virtue to him for one night in exchange for clemency that would save Johnny’s life feels just about perfect in this new musical.  It’s a smart and creative reimagining that works wonders on the plot points, especially using the Sheriff as the good guy coming up with the plan to use Bella as a body double, all in order to save Johnny from his intended hanging. It’s the smartest thing in this show, and a job well done by the writers.

The scenic design by James Morgan (York’s Marry Harry) keeping the noose hanging over, literally, all our heads is delicious, and even though his work is filled to the brim (and over flowing) with pun after pun, it works, like a fun elbow nudge to our ribs, just like Nicole Wee’s wonderfully western costumes. Paul Miller’s lighting is a bit wobbly at times, just like the jail house bars, and could use a bit of an upgrade, but in someways it adds to the silliness in the end. And Julian Evans’ out of this world sound design is bang on, the head and otherwise. There is also the silly and fun use of Father Morse (and others), played by the sometimes over-the-top Gary Marachek (The Lion Theatre’s Bedfellows). Although his Irish accents comes and goes just like his drunkenness, he is well used as a very non-steriotypical Father, who is willing and basically able to help out his fellow cell-mate. Nichy or not.

It’s no surprise, moving forward, that Suzanna will become another in the long line of musically confused nuns, joining the ranks of Julie Andrews in ‘Sound of Music‘ when she sings that lovely “What is this Feeling?” about the good-hearted and strapping Sheriff, a man that deserves this feeling whole-heartedly (yes, I have a wee crush). Their eventual kiss is a foregone conclusion as it’s pretty obvious that Suzanna will never be a very good nun, and as with all good Shakespearen romances, this funny frolicking show ends with a double marriage. and not the one Governor von Richterhenkenpflichtgetruber has intended.

With solid music direction and orchestrations by David Hancock Turner (CSC’s Passion) and a smartly directed and choreographed good time by Bill Castellino (York/Westside Theatre’s Cagney) the musical production giddily gallops forward, taking a convoluted Shakepearian text and improving on it.  I never thought I’d say that, but Measure for Measure, mixed with Mel Brooks and a melodic musical score creates one great time at the dance hall. So ride your horse over to this here saloon, and settle in for a silly but wonderful ride.  Only one question to ask, “Why aren’t the in-your-seat cocktail servers at the New World Stages wearing cowboy hats?” cause that’s a drink I could order up nightly.

Genevieve Rafter KeddyJune 22, 2022
Read More
Scroll for more
Tap
Opening Night and On the Red Carpet With Half Time
She Says: Desperate Measures a Brilliant Musical That Can Barely Be Heard Over the Audiences Deafening Laughter