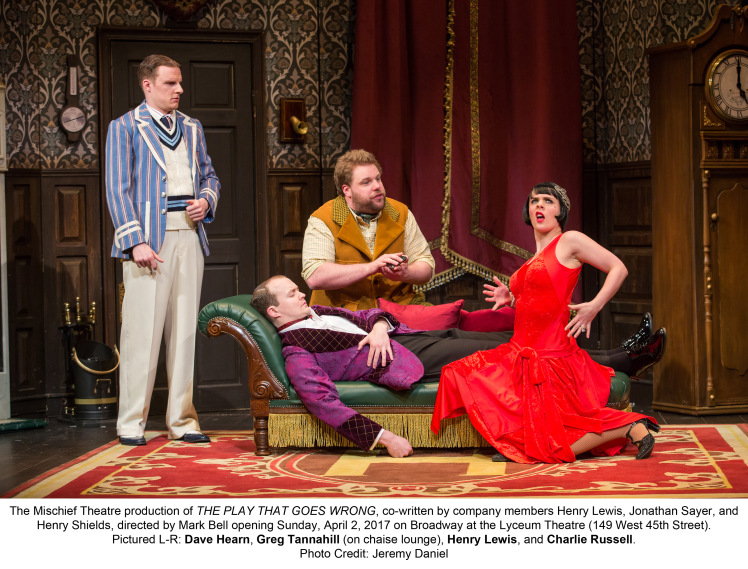 He Says: The Play That Goes Wrong: All is Right in this Wrong

He Says: The Play That Goes Wrong: All is Right in this Wrong 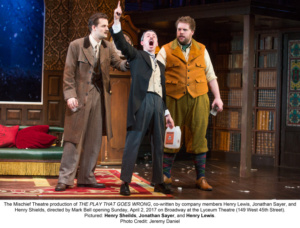 Oddly enough, when I first saw this hysterically funny farce in London back in July of 2015, it was on one of those theatrical overload days when I also saw the Noel Coward play, Hay Fever at a matinee with The Play That Goes Wrong in the evening. Regarding that London day, I thought the Olivier winning production of The Play That Goes Wrong was “spectacularly funny“. How right this play was, and I hoped to get a chance to see it again over here on Broadway. I also wrote that I thought the Coward play was “tedious”, even while being charming and well done, commenting that I thought the production was slightly dusty.  I’m happy to say that the Mischief Comedy Troupe’s Broadway transfer of that same madcap farce is just as exactingly done. Strangely enough, I saw The Play That Goes Wrong on Broadway the day after the viewing of another Noel Coward comedy, Present Laughter, currently starring Kevin Kline. I won’t give away my thoughts on that show as it opens later this week, but suffice to say, it was a déjà vu moment. 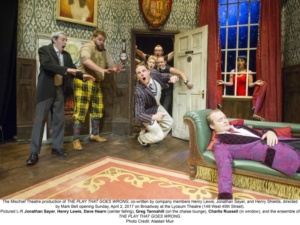 The Cornley Polytechnic Drama Society, as introduced to us by its director, Mr. Chris Bean, played to perfection by Henry Shields (also one of the three creators), hasn’t had much luck recently with their theatrical endeavors. From his opening curtain speech, it sounds like they have had more disasters then one can imagine. So with that being said, we are told we are about to see their new production of a 1920’s style murder mystery play, Murder at Haversham Manor, the serious play within the ridiculous.  And as that saying goes, what can go wrong, does go wrong, and boy, do they do it spectacularly. Without a dull unfunny moment in this two hour production, I’d say it’s quite an achievement, one that even on second viewing, kept me laughing from the first second to the last. 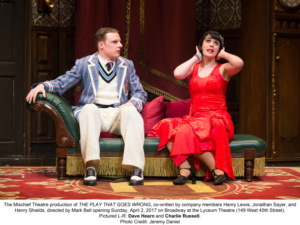 The original entire London company, made up of Rob Falconer (Trevor/lighting and sound operator), Dave Hearn (Max/Cecil Haversham), Henry Lewis (Robert/Thomas Colleymoore), Charlie Russell (Sandra/Florence Colleymoore), Jonathan Sayer (Dennis/Perkins), Shields (Chris/Inspector Carter/Director), Greg Tannahill (Jonathan/Charles Haversham), and Nancy Zamit (Annie/stage manager), all are on point, playing actors or stage hands within the play within the play, making madcap mistakes perfectly.  It takes a lot of talent to be this bad and act terribly so well, and this troupe mess up, fall down, get their lines out of sync, and ride this disaster out to the end, miraculously. The creative team of set designer, Nigel Hook, lighting designer, Ric Mountjoy, sound designer, Andy Johnson, and costumer designer, Roberto Surace, recreate their wonderfully exacting disastrous work here. All deserve our utmost respect and applause, especially the director Mark Bell and writers, Lewis, Sayer, and Shields (all three part of the ensemble) who make up the comedic troupe, Mischief Theatre in London. It’s nearly impossible to pick a standout performance from the lot, although I found Hearn as the hapless actor, Max Bennett playing Cecil Haversham, the brother of the murder victim, particularly well written and superbly enacted.  His grin is infectious, as is the whole darn production.  If this is failing, then it’s the best failure I’ve seen on stage since the madcap Noises Off  last year at the Roundabout. So break a leg, boys and girls, we’ll be laughing along with you all the way to box office success.