He Says: The Public’s White Noise at High Volume 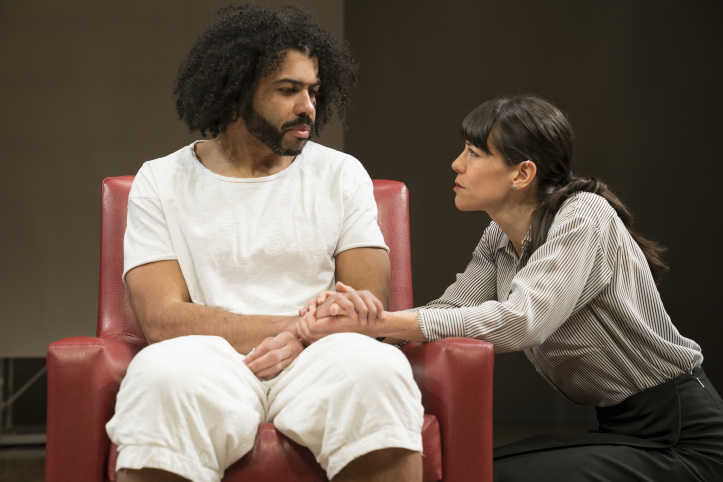 He Says: The Public’s White Noise at High Volume

The first explanation of his man’s place in the world is an important and powerful schema to understand, and one that elicits a tremendous amount of intense internalized questioning from The Public Theater audience where Suza-Lori Parks’s new play, White Noise is being presented with full force. Given within an arm chair moment by the devastatingly good Daveed Diggs (Broadway’s Hamilton, Netflix’s “..Kimmy Schmidt“), Leo wants us to know the structure he lives within; to understand, for one, his illogical childhood fear, told to him casually one day when he was far too young, that the sun is going to die one day and from that moment on, his ability to sleep has been taken away from him, along with his sense of security and well-being.  Luckily, he’s been part of a tight social community; a loving one with three others: Misha, played by the intense Sheria Irving (Broadway’s Romeo and Juliet); Ralph, played by the brave Thomas Sadoski (Broadway’s Other Desert Cities); and Dawn, portrayed by the talented Zoë Winters (RTC’s The Last Match). All four are exceptional in their formulations, each orchestrating a complicated and connected vantage point to the world and complex racial trauma that might be waiting around the corner. They are each given their perspecitve to share, most brilliantly throughout, but more importantly, they are there for one another, and although their coupling is somewhat convoluted, the characters all seem to understand what it means for them all to go to their communal happy place, as friends, partners in love and crime, or teammates in competitive bowling. The unity is clear, even when the authentic impulses are complex and disorganized, but through a “sheer force of will” this piece hits harder to take in comfortably and emotionally deeper than expected with every ball thrown, focusing in on, not the pins, but the arrows of freedom seen in the middle of history and lanes of structural inequality, forever intertwining slavery and genocide with the opposing principles of America’s creationism.

Parks has lined up her approach inside a biblical 40-day thing, making her approach utilizing a string theory-inspired construction, where the complicated subject of freedom will be uncoiled and curved. “If you really think about it, it’s nerve wreaking“, this idea that is presented and followed through by Leo that one fateful night, where strikes are considered a win, and a well funded friend could become the owner of property like we haven’t seen lately, and a form of protection for Leo against the harms of racist humanity on the dangerously patrolled streets of modern NYC (and beyond). As directed with an unflinching eye for clarity and authenticity, Oskar Eustis (Shakespeare in the Park’s Twelfth Night) focuses on the fear and kinship within the disconcerting discomfort of what Leo has asked for. “Sleep on it” he is told. “I don’t sleep” he answers, clearly stating his desperation and need.

Who is owned by whom and how? Can a father own a son through his finances? Can a man own another who asks for and wants it? This three-plus hour play dares to dive into the uncomfortable mess of internalized hatred and racism, and the panicked feeling of being angry at and frightened by the world, just not simply at the one who pushes one down with unforeseen intensity and wise organization. There are terribly uncomfortable amendments to the contract, foretelling a faltering future of one soul and than another. But let the games begin, Bro, they say. There is dread and trouble on a flash card that fateful night that one slipped and came loose, and the understanding or idea that the only way out is through, Mr. Ralph. This uncompromising idea of punishment collars and the feeling of being protected and safe gets harnessed onto Leo by playwright Parks (Topdog/Underdog), and even as we flinch, we watch, glued to our seats, unknowing whether this gamble is going to go down into the gutter or give Leo the strike he needs. “Somehow they know I’m yours” is as complicated a statement as Misha’s “on my show I play black” because she knows that the “Ask a Black” framework is more marketable, and in someway safer. Her monologue, as is the case with each one of the four impeccable actors, is everything plus more, and as the days tick forward, written with chalk strikes on a prison wall, the facts line up like pins waiting to be bowled down.

On a stark but solid stage designed with a wise nod to the Spot by Clint Ramos (2ST/Broadway’s Torch Song), with direct and telling lighting by Zavier Pierce (Arena Stage’s Smart People), terribly exacting bold-print costuming by Toni-Leslie James (Broadway’s Come From Away), strong projection design by Lucy MacKinnon (Broadway’s Lifespan of a Fact), and solid sound design by Dan Moses Schreier (Broadway’s The Iceman Cometh), the feelings are being felt, not just being thought. This special project of Leo’s attacks and dissects the stupid divisive shift of slave mentality and white privilege. White Noise drowns out the chatter from beyond, forcing us to pay close attention to all four dilemmas and play along with the experiment, hoping that Leo and company find the rest and peace they all need, and that we find the answers to the questions asked within ourselves.  It’s a powerful descent into complex ideology and racist thought, forcing all four of them (and us) to look inside at our preconceived notions of security and freedom. As we count down to the perfect game and the end of the 40-day trial, the anxiety of the audience is palpable and electric, much like this smart strong play. Art has been discovered within White Noise, buzzing throughout the evening. It’s a raw rare treat to be challenged at this high level of wise wit and clarity, and for that, I am truly grateful.