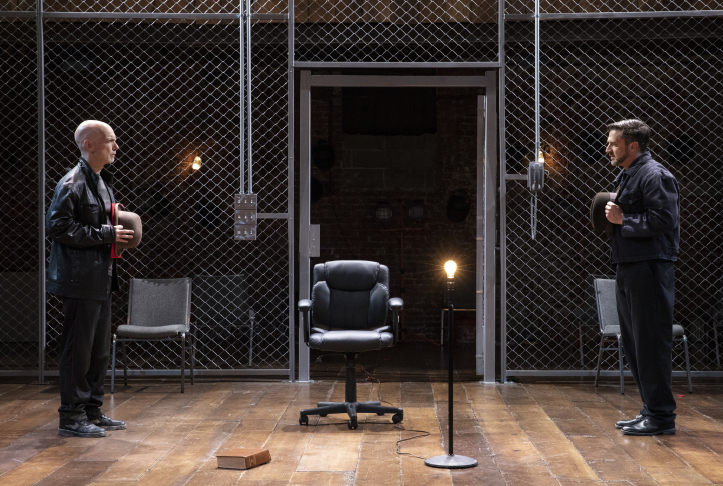 Bertolt Brecht on a rainy Friday night in New York City. Sounds sorta perfect, if you ask me.  Like a heavy thoughtful and satirical night of intellectual contemplation, or maybe that’s just my impression of the German theatre practitioner, playwright, and poet. Growing up in Munich during the Weimar Republic, his dramatic themes within his pieces are often sharp and political, influenced by Marxist thought and doctrine.  He believed in a theatrical model dubbed ‘epic theatre’ or ‘dialectical theatre’ encompassing large and important themes and constructs, with this one strongly influenced by the Nazi period in Germany that he luckily escaped, living an artist’s life in exile in Scandinavia and then the United States. He did finally return to East Berlin after the end of World War II, but that was after he wrote The Resistible Rise of Arturo Ui, a completely unresistible piece of epic political theatre.

The Resistible Rise of Arturo Ui (German: Der aufhaltsame Aufstieg des Arturo Ui), is Brecht’s 1941 ‘parable‘ play, rising out of the horrific conception of the Third Reich. It chronicles the ascension of the despicable Arturo Ui, a fictional Depression-era Chicago mobster, and his crushing grab to control the cauliflower racket by ruthless and violent means, threatening and murdering all that oppose him. The play is really a satirical allegory of How the people failed to pay attention to the growing power of Adolf Hitler and the Nazi Party in Germany prior to World War II. There was no resistance, or at least not a successful one back then, but as directed by John Doyle (CSC’s Carmen Jones), this disturbing yet brilliant dissection of politics and history is more modern in its scope and warning signs, taking aim not just on the past but definitively on the here and now. Written by one of the greatest political satirists of all time, Arturo Ui, played with immense power and frightening charisma by four-time Tony Award nominee Raúl Esparza (Broadway’s Company, Broadway Center Stage’s Chess) not only gives us a deliciously diabolical Capone and Hilter-like thug, but also quite succinctly unmasks the Orange Monster that resides underneath, demanding all to pay attention to the obvious signs that are not so subtly being outlined. It’s clear and thoughtfully concise, shining the light on the troubled times we live in, but hopefully not on our future as a country. #Resist we must chant, or else we will repeat.

John Doyle, as written in the press release, says of Arturo Ui, “Everyday I read the play, I think, ‘I hear these words on CNN as I read them on the page.’ The play will be falling right around the midterm elections, and it’s fitting that it reminds us of the choices that are available to us in relation to the way the world can go. That really is at the foundation of what classical theater says. Classic plays have politics at their heart—you take a play like Richard III or the Scottish Play—they’re warnings. And there’s a warning in Arturo Ui. This is a time for theater to say something; if we’re not screaming and shouting now, when are we ever going to do it?”

Bravo, I would say, and the Classic Stage Company production does that very job, screaming the good word out to the heavens and beyond. Doyle as the director and designer has meticulously crafted a layout that clangs and bangs itself into place with every turn of the screw. With appropriately blank and meaningful  costuming by Anne Hould-Ward (CSC’s Dead Poets Society), stark and strong lighting by Jane Cox (Broadway’s Jitney) and Tess James (Public’s Othello), and crushing and clanging sound design by Matt Stine (Barrow Street’s Sweeney Todd), the talented cast joining Esparza don several various hats, formulating a world that resembles the Three Penny Opera, but sounds like Shakespeare’s Richard III. The caged cast is filled with pros: George Abud (Broadway’s The Band’s Visit), Eddie Cooper (ATC’s This Ain’t No Disco), Tony nominee Elizabeth A. Davis (Broadway’s Once), Christopher Gurr (Broadway’sTuck Everlasting), Omozé Idehenre (ACT’s Caucasian Chalk Circle), Mahira Kakkar (TFANA’s The Winter’s Tale), and Thom Sesma (CSC’s Pacific Overtures). All working as one, creating an angry vibe of danger that would do Brecht, who wrote Arturo Ui while in exile awaiting his U.S. visa, proud. He imagined a vision of American totalitarianism that seemed almost Orwellian in nature. He fashioned the piece for the American stage, although the play, ultimately, was first performed in Germany, after Brecht’s death in 1958.

Written mostly in verse, this highly stylized vaudevillian portrayal of an American gangster mentality strangely incorporates the violent authority the modern esthetic and depiction of classical theatre, pulsing with the antithesis of a natural acting style with more introspective bravado and deep dark farce framed in Shakespearian blood and tragedy. It magnificently and meticulously parallels events and individuals that brought Hitler to power, and foreshadows a future potential that gets scarier by the day.  Each character has a direct modern counterpart to the horror show of the Third Reich: Ui (Esparza) obviously represents Hitler (and possibly a more current Nationalist #OrangeMonster), his henchman Ernesto Roma (Cooper) not so secretly parallels Ernst Röhm, the head of the Nazi brownshirts; Dogsborough (Gurr) steps into the guise of General von Hindenburg, the President of the Weimar Republic; Emanuele Giri (Davis) slides into the shoes of Hermann Göring, Hitler’s second in command; Giuseppe Givola (Sesma) represents the master propagandist Joseph Goebbels; with the Cauliflower Trust parroting the Prussian Junkers; the fate of the town of Cicero standing in for the Anschluss, which brought Austria into the Third Reich; the Dock fire based loosely on the Reichstag fire that flamed the whole diabolical action forward, higher and higher.  I couldn’t help jumping back in my head to the Park Ave Armory’s production of The Damned that projected that fire and subsequent rise for us all to take it. A dark but wonderful companion piece to Brecht’s Arturo, which opens with a choral monologue behind chain links. The device is utterly compelling although somewhat stereotypical, but by outlining the scenario and its players, the piece forces focus on the message rather than the plot or the players.  The historical parallels are chillingly broadcasted clearly for all to see, presenting relevant information regarding Hitler’s rise to power, layered with modern-day GOP flavored diatribes quietly and obstinately slipping out in poses and postures. It’s powerful stuff, pretty much from the get-go, relishing in the intense and interesting similarities to the film The Great Dictator (1940), Mark Antony’s famous speech from Julius Caesar, and Shakespeare’s tragic ghost seeing Macbeth. Doyle isn’t subtle in those creations or parallels, but there is no need. Sadly the truth is not fake, nor the references bent too far off track. And if you don’t see the modern-day enactments, a bit of very sneaky and telling chanting and posturing at the ends nails the present day problem down perfectly. #Resist or else Arturo might be your leader for a while.

Suzanna BowlingJanuary 24, 2023
Read More
Scroll for more
Tap
The Other Josh Cohen a Relatable, Delightful Night Out
She Says: Raul Esparza is Mesmerizing in Classic Stage Company’s The Resistible Rise of Arturo Ui