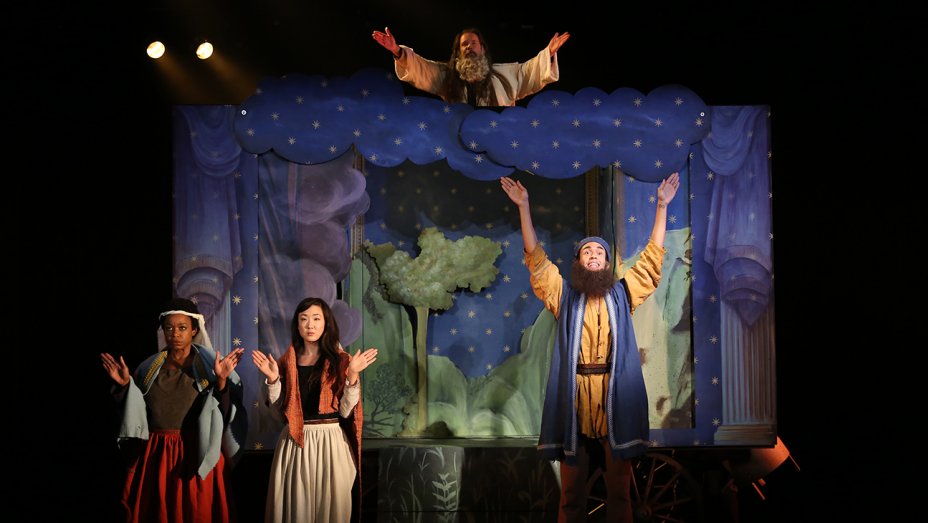 He Says: The Review Vineyard’s The Amateurs

He Says: The Review Vineyard’s The Amateurs

Ross
Jordan Harrison wrote one of my favorite plays of last year, Playwright Horizons’ Marjorie Prime. He created a world that was so close to the real thing, steeped in mortality, but miles away from the present and true journey. He twisted us around, asking us to peer into grief and aging, and ponder some serious questions, all while reveling in the joy of the futuristic moment.  Now, over at the Vineyard Theatre, Harrison is at it again, but in a very different timeframe, playing with some similar themes while going back to a different age, sort of, to create the truly enjoyable and fun new play, The Amateurs. He layers many different questions and concepts within its fascinating structure, but the ride is a worthy one, even when the bumps are confusing, and the overall reasoning not so clear.
Directed with an appealing sense of adventure by Oliver Butler (PH’s The Light Years), The Amateurs drops us down on a grassy hill with a 14th Century band of traveling players in mid-rehearsal of a Medieval religious play based on Noah’s Arc.  Lead by their narcissistic captain, Larking, portrayed knowingly with a flurry and a wink by a fun Thomas Jay Ryan (TFANA’s Measure for Measure), the pageant players, draped in capes and wearing inventive Greek-style masks (mask/puppet designs by Raphael Mishler) attempts to portray the deadly sins of the day, while attempting to out-run the horrific Black Death that is breathing down their back.  The touching Brom, played by the solid Kyle Beltran (Public’s AMidsummer Night’s Dream), the earthy Hollis, beautifully and warmly portrayed by Quincy Tyler Bernstine (Broadway’s In The Next Room, “Manchester by the Sea”), and the saucy Rona, magnificently played by Jennifer Kim (2ST’s Engagements), with ‘The Physic’, delicately and charmingly portrayed by Greg Keller (VT’s Somewhere Fun) following along soon after, joining this troupe of actors, fights and frets upon the stage lovingly and aggressively against and for each other. They are just like one big dysfunctional but caring family, one that is a lot of fun to hang out with.  They hope, with the help of their handy-man artist, Gregory, skillfully played by Michael Cyril Creighton (PH’s Stage Kiss) to wow the Duke in the next fortified town, that if pleased, he will let them remain within the safety that the walls could provide, at least until the Black Plague has passed them by.
It doesn’t take much for any of us to see the Noah’s Arc parallel to the walled sanctuary city of the Duke, but the writing is sharp, modern, and witty, and the cast is so engaging that the simplistic metaphor is fully and happily embraced.  And then something miraculous, wild, and pretty confusing happens, all within a quick flash and a costume change.  Creighton’s Gregory appears as the modern-day stand-in for the actual playwright, walking out onto the stage at the exact moment of great conflict and shock. Literally as death comes a-knocking, Creighton’s modern day guide steps in for a bit of explaining, something to be honest, I was starting to feel the need for.
In a bit of extreme meta-theatricality, one that completely came out of the blue from no-where land, the fourth wall drops away and the actor who’s playing the playwright, with a grand assist from another actor, who’s playing an actor, the absolutely endearing and very gifted Bernstine, weave a few brilliantly told stories onto a complex structure of ideas about our individual and collective responses to a world that is eating itself up from the inside out. Be it then, or now. The Black Plague and the Gay Plague become intertwined, and the internalized shame and confusion of growing up gay, homosexuality in general, AIDS, and death are incorporated into a unique perspective, layered with our internal reactions to the great external and dangerous ‘outside’ and the uncertainty it holds.  In a particularly sweet, but slightly abstract moment of show-n-tell, Creighton instructs and guides us through a presentation of art demonstrating the shift from the ‘it-takes-a-village’ kind of thinking to the more individual way of being human that is possibly the product of either or both plagues.
I think…..
But I’m not entirely sure.  After the slightly convoluted but entertaining footnote, the action resumes with the troupe arriving at the town of the Duke.  Noah’s story is told, quite wonderfully and hilariously by all, especially by Hollis and The Physic with their smart and very well written ‘ab-libbing’.  With the wonderfully quaint, inventive, and charming Medieval stage and overall scenic design by David Zinn (Broadway’s Spongebob Squarepants), costumes by Jessica Pabst (PH’s The Profane), lighting by Jen Schroeder (MTC’s In The Body…), and original music/sound design by Bray Poor (Public’s Office Hour), the whole venture is quite the pleasurable journey down a Medieval dirt road with this band of thespians, and even with the deadly Black Plague following their trail, The Amateurs is anything but.  The road is winding, the scenery appealing, the company delightful, and the plagues are two-fold and horrible, but I wouldn’t miss this journey. Even when I’m a bit lost on the road and inside the bigger picture, the journey and the storytelling is truly appealing.