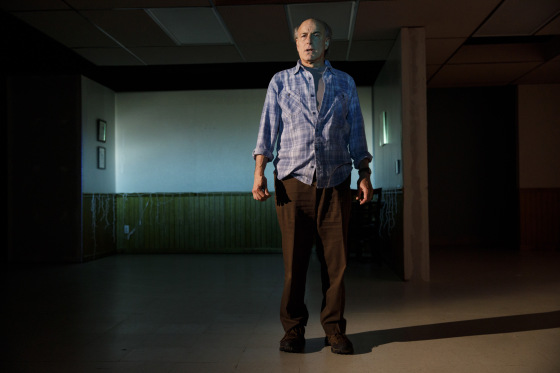 He Says: The Treasurer: One Dark and Funny Mother’s Day Card Here

He Says: The Treasurer: One Dark and Funny Mother’s Day Card Here 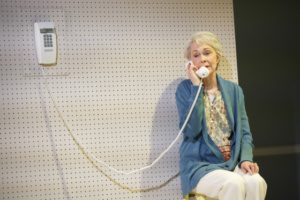 Downstairs on the main stage at Playwrights Horizons, there is a beautiful and complicated play that is stemmed from the love of a mother, and revolves around the death of a father.  The children have come to the death bed of their father, surrounding him with love and devotion. Sarah Ruhl, the playwright of For Peter Pan on Her 70th Birthday obviously cares just as deeply for her mother, writing her into this play, and her her lovingly portrayed by the magnificent Kathleen Chalfant. The play was written as an ode to her high flying days and their strong emotional connection. And from what is on display in Max Posner’s The Treasurer, upstairs from For Peter Pan.., this playwright has done something similar, with a lot more humor, but from a very unique angle and with a very different outcome. 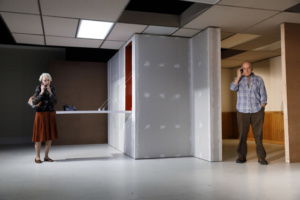 It all starts out with a man, ‘The Son’ as he is referred to in the program, played with an exacting attention to emotional detail by the incredible witty Peter Friedman (The Public Theater’s Hamlet), explaining himself to us from center stage.  He tells us quite matter of fact-ly, that his son has asked him if he could write a play about him, which he doesn’t quite understand.  He doesn’t feel he has much to offer dramatically, being the type of man that he is, but he is wrong.  His son, the playwright, wants to write not just about his father, but his father as a ‘Son’ who has a very difficult and stressful relationship with his aging mother.  This is not going to be a pretty mother’s day card, like Ruhl’s play is. The ‘Son’ makes that perfectly clear. The obvious love of the playwright’s father is solid and clear, while the ‘Son’ and his mother’s connection is far from rosy.  The Treasurer is an engaging new play, wickedly funny and surprisingly surreal, that focuses on a man dealing with an aging parent, his mother, with whom he doesn’t have quite the typical nor loving bond with.  For many reasons, he tells us, in clear and unique fashion.  And within the first few minutes of this intricate and powerful piece of theatrical writing, crazily funny and whip-smart, we are instantly on his side.

ShakesBEER is an Afternoon Delight
She Says: The Guilt Of A Child Leads to Hell