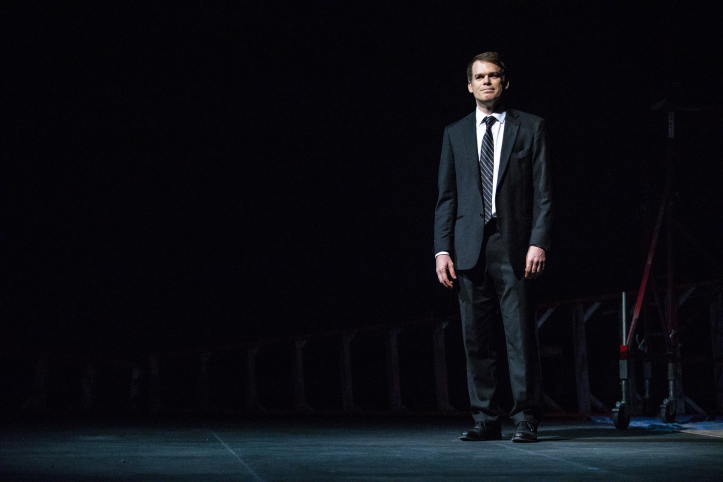 He Says: Thom Pain (based on nothing) is

He Says: Thom Pain (based on nothing) is

It is, exactly that. An abstract compilation of thoughts and meandering passages that is both funny, charming, and infantile, oddly engaging and utterly frustrating. Playwright Will Eno (The Open House) asks a lot from his audience in terms of patience and openness, and with Michael C. Hall’s (Eno/Broadway’s The Realistic Joneses, NYTW’s Lazarus) brilliantly captivating presence as the tour guide, we, on the most part are willing to be caught. That is at least for the 70 minutes that he asks us to try to follow the haphazard storytelling stroll through the main character’s mind and quick change thought process.

Directed with a clever meandering quality by Oliver Butler (NYTW’s What the Constitution Means to Me, Vineyard’s The Amateurs), Thom Pain plays and prods, daring us to believe in his beginnings and mischievous backtrack loops. He takes us here and there and back again on the wide open expanse of Signature Theatre‘s stage designed with an elegantly haphazard touch by Amy Rubin (TNG’s All the Fine Boys), a suited and simple costume design by Anita Yavich (Public’s Oedipus El Rey), detailed and intimate lighting by Jen Schriever (MTC’s Dan Cody’s Yacht), and pitch perfect sound by Lee Kinney (PH’s The Light Years). Butler and Hall tug and tease our heart playfully with full commitment to the task, but leave us feeling a bit empty at the end, even with the entertaining mystic of possibility being engaged with. Hall’s masterful performance elevates Thom Pain to ridiculously towering heights, challenging our attention deficit and pleasing his own self with asides and winks. He paints a beautiful detailed picture with poetic nonsense, negating it before we can ever fully understand. I can’t say I was with Thom Pain from beginning to end, checking my watch from time to time, much in the same way Eno’s Wakey, Wakey distanced me from the heart of the matter but the zigzagging hike to nowhere isn’t a complete waste of time either. It’s pleasurable absurdity and sleight of hand, begging an answer to the question, “Do you like magic?“, but never really telling us why our response matters, either way. We zigzag to nowhere and back under Hall’s charming persona, happily trailing along behind and smiling with delight at the scenic route we are taking; without much understanding of the purpose, other than just a rambling sense of pleasure and cleverness.

Lovingly Streaming All These Tiny Beautiful Things from George Street