He Says: Trevor Gets Its Motivation Through Diana Ross 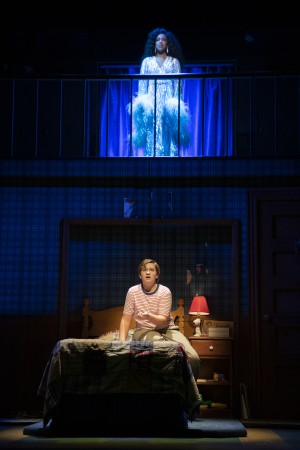 He Says: Trevor Gets Its Motivation Through Diana Ross

Trevor at Stage 42 is a musical about a boy who is experiencing the many changes boy’s and girls go through in Jr. High School. The year is 1981 and president Reagan has just been shot and life goes on at Lakeview Jr High. Trevor (Holden William Hagelberger), is a boy who lives through Diana Ross, her music and dance. From the beginning there is no doubt that he is a homosexual even though his parents don’t have a clue. Neither does his best friend, Walter (Aryan Simhadri).

Dan Collins’ book gives us the typical Jr High story, the boy’s who likes girls, the athletes who compete, the geeks who are outcasts. Staged well, the musical is quite enjoyable. The show’s moving parts especially Trevor (Holden William Hagelberger), is performed with deft choreography by Josh Prince and superb staging by Donyale Werle.

Even though Dan Collins lyrics and Julianne Wick Davis songs fall short at times, the costumes and the young actors for the most part make up for the musicals short falls.

At this performance Diana Ross was played by Aeriel Williams and her voice, her acting and her sexiness inspired the musical. Her presence gave Trevor the courage and the confidence that he needed to not only survive but do it with panache. In the second act is when Ms. Williams really knocks her songs out of the park. Songs like: “Remember Me”, “Endless Love” and “I’m Coming Out” were met by riotous applause. Larger than life, this Diana was something to behold. Commanding in her role Williams owned the stage when she was on it.

Trevor is not the A-Typical  story. When it’s discovered that Trevor is Gay, the musical didn’t resonate on it, nor is he overtly picked on. The image of what he is going through was given in light doses rather than bluntly. This kept the show focused solely on what was at hand to the audience, that Trevor has to reach within and over time his life would change and as he accepts himself, so will the people closest to him.

The first act moved along and the songs were delightful. “Everyday”, “Everything Is Weird”, “One Of These Days” and “I Don’t Know” played well to the show’s book.

The second act’s first two songs were worrisome, however, both “Your Life Is Over” and “Ain’t No Mountain High Enough” were over the top campy; not boding well with the musical genre. After these two debacle’s, Trevor settles back in. Watching Trevor handle his life the best way he knows how to. Both the actors, ensemble and music was best served to us when Collins stayed on point with the show’s message before us.

Trevor at Stage 42 works well. This is the perfect house for this musical, big enough for Bruni the director and Prince the choreographer to move the cast around, yet small enough to give the intimacy to the audience. Like Jr. High School, we had big, but the show is not to big to get lost in. This show worked because of where it was presented, a bigger house would have drowned this musical.

Suzanna BowlingJanuary 18, 2023
Read More
Scroll for more
Tap
A Slight Light Commercial Jingle for the Talented Regina Comet
War Words…Shit Happens, And Then You Drive On