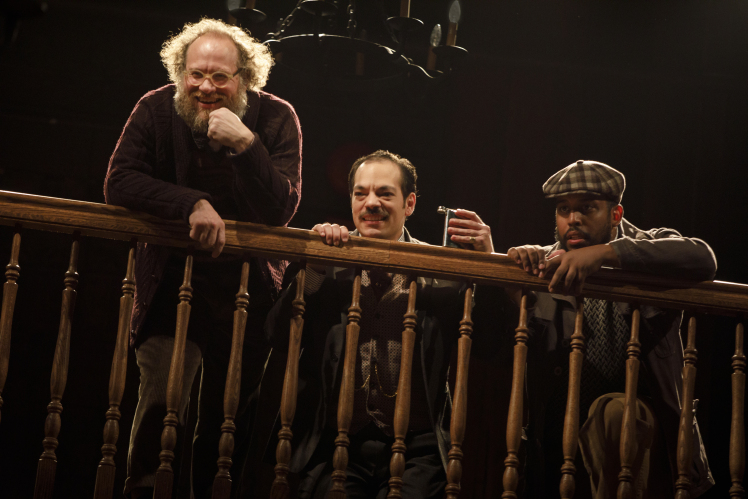 He Says: Twelfth Night: A Fun and Festive Fiasco

He Says: Twelfth Night: A Fun and Festive Fiasco

Ross
I feel like I’ve been here before. The setting is surprisingly similar to the last Shakespearean journey I took just a few months ago when Classic Stage Company presented As You Like It. That was a less than stellar production lacking an ease and finesse with the language of Shakespeare, and even with the beautifully swingy score, it lacked the melodic qualities of the language. I prayed that the Fiasco Theater, the one who gave us the most charming and inventive revival of Into The Woods a few years ago at the Roundabout’s Off-Broadway theater, would once again surprise us with a similarly clever adaptation of this 1601 comedy classic, Twelfth Night by William Shakespeare.
As it gets close to beginning, the traditional fourth wall is dropped away.  The actors wander out and mingle, engaging with each other and the audience.  It seems that within modern theatre, the honoring of the fourth wall is a dying breed as more and more productions, especially Shakespearian ones drop it completely. As I wrote in my review of Once On This Island, having the actors on stage before the play begins sometimes dilutes the power of those first words spoken. Luckily, directors Noah Brody and Ben Steinfeld have the cast come together in a circle to usher in the story with a song and an unpacking of the set pieces that are piled and tied up on a table. This simple act helps draw us in and highlight the words of Shakespeare once they begin. And while this troupe of actors has a darn good time telling us the tale of Viola, Olicia, Orsino, and company in a play that many call ‘perfect’, the language of Shakespeare, once again, seems to cause a bit of a stumble with these actors (voice consultant: Andrew Wade). Not as much as in Doyle’s As You Like It, mind you, when the language seemed to own the actor, rather than the other way around. Here the melody and sound resonate much better, but not entirely in tune with the musicality of the language and the poetry of the words.

That being said, this Twelfth Night is by far the superior of the two, in terms of the over all feel and sense of festivities within the production. It feels like a big Shakespearian holiday present from the 50 year-old Classic Stage Company. Musically it is lively and sweet, thanks to musical director (and actor/performer) Ben Steinfeld (Broadway’s Bloody Bloody Andrew Jackson), and even though these two productions seem to share the same design sense because of scenic designer, John Doyle (As You Like It, Pacific Overtures) and color hue (costumes: Emily Rebholz; lighting design: Ben Stanton), the feeling of this production is lighter, earthier, and far more enjoyable.

Twelfth Night as a whole, is a beautifully structured play, that grapples with the thorny issues of disguise and gender inequalities, similarly to As You Like It. This time around, the plot centers on the story of Viola and Sebastian, twins who are shipwrecked off the coast of Illyria. Separated during the storm, each one believes the other has died. Unlike that other Shakespearian tale, the brother, Sebastian has a much lesser role in this piece. He has survived the storm with the help of David Samuel’s Antonio, an outlaw who happens to be wanted by Duke Orsino, and sets out to explore the foreign land with his new and loyal friend. Only later, when his path begins to cross with his sister’s does his character, played by Javier Ignacio (Broadway’s Side Show) start having some importance to the Twelfth Night festivities.
Viola, played with a lovely charm by the strong tongued Emily Young (TFANA’s The Two Gentlemen of Verona) is definitely the heroine of this play. Disguising herself as the young man, Cesario, she, as a he, seeks safety and refuge under the wing of the kind Duke Orsino. It isn’t exactly clear to me as to her need for such safety, but this is Shakespeare and one of his romantic comedies, so I guess it is something we just have to believe. The disguised young woman naturally falls in love with her master, the handsome Duke, and it’s no surprise as he is played by the strong and poised Noah Brody (New Victory’s The Imaginary Invalid), co-director of the play. [Steinfeld co-directs with Brody, while also playing the wise and intuitive Feste the fool.]
The Duke tells his faithful servant, Cesario that he is desperately in love with the Countess Olivia, portrayed deftly by Jessie Austrian (Broadway’s The Importance of Being Earnest), but unfortunately for him (or maybe fortunately for all) she has no eye for Orsino. Refusing to give up, he sends his new helper, the well spoken Cesario to speak to Olivia on his behalf, professing love with a capital ‘L’. Naturally, upon meeting Cesario (Viola), Countess Olivia falls madly and deeply in love with what she believes is an earnest, well-spoken young man. The love triangle is set, the genders are confused; so let the Twelfth Night games begin. We know how it will all end, as it is one of the rules of Shakespeare (or so it seems) that comedies will end in marriages, and in that he will not disappoint.
Adding a lot of fun on the sidelines, the other characters of this game all play within a hilariously silly subplot alongside the main action in the form of a somewhat cruel prank. It all begins with a beautifully acted and very funny late night revelry. Olivia’s riotous uncle, Sir Toby Belch, played with drunken perfection by Andy Grotelueschen (Broadway’s Cyrano de Bergerac) and a silly squire named Sir Andrew Aguecheek. Paco Tolson (MTC’s Vietgone) plays the young suitor with a stupendous sense of drunken silliness and glee, as he attempts, most unsuccessfully, to gain the favor of Olivia. The two grown adults, acting like naughty teenagers, engage in a loud night of drinking and singing of songs, disturbing the peace of Olivia’s quiet household. The revelry prompts Olivia’s manservant, Malvolio, played ridiculously well by Paul L. Coffeey (TFANA’s Cymbeline), to chastise them severely. Sir Toby famously retorts, “Dost thou think, because thou art virtuous, there shall be no more cakes and ale?”
After the firm wrist slapping they get from the pompous steward, revenge will have to be sought by Sir Toby, with the help of the very spirited servant, Maria, most hilariously played by Tina Chilip (Signature’s Golden Child), servant Fabian, played by David Samuel (Arena Stage’s Ruined), and her melancholy fool, Feste (Steinfeld). It’s a deliciously evil plot they concoct to make a fool of Malvolio once and for all. With a carefully planted love letter written by Maria in Olivia’s handwriting, they convince Malvolio that Olivia is secretly in love with him. It asks much of Malvolio to prove his love to Olivia, and once he starts to act out the contents of the letter, his dissent into despair and foolishness is complete. It’s great fun, although the plot spins off into a pretty dark terrain, literally speaking, and although this production handles it with care and lightness, one can’t help but marvel at how far it has been taken.
Twelfth Night is a playful reference to the twelfth night after Christmas Day, called the Eve of the Feast of Epiphany. Classic Stage Company has gifted us for the Holidays with a lovely and enjoyable treat emphasizing love and play over religion and piousness. Prior to Shakespeare’s writing of the play, the Twelfth Night was famous as a day of revelry, when servants often dressed up as their masters and men dressed as women, bending genders and status across the board. This history of festive ritual and Carnivalesque reversal is the origin of the gender confusion plot. The play Twelfth Night is seen by scholars as attempting to preserve this festive and traditional atmosphere of licensed disorder and the playful inversion of all those things representing order and decency. Malvolio, the pompous and arrogant steward is looked upon as an adversary to the festive enjoyment of all others, most specifically, Sir Toby Belch, “the vice-regent spokesman for cakes and ale” and his partner in crime, the simple and constantly exploited Sir Andrew Aguecheek. And he must be punished.  Luckily for us, this production is the reverse of punishment. It is enjoyable and fun, landing firmly in the esthetic of the festive ritual it honors. Could it have been better? Possibly so, but as it is with all parties, a few more songs, more exciting conversations, and a few more laughs  are always needed to make a good party even better.
Related Itemsben steinfeldClassic Stage CompanyFiasco TheaterNewnoah brodyRossShakespearetwelfth night
Off Broadway