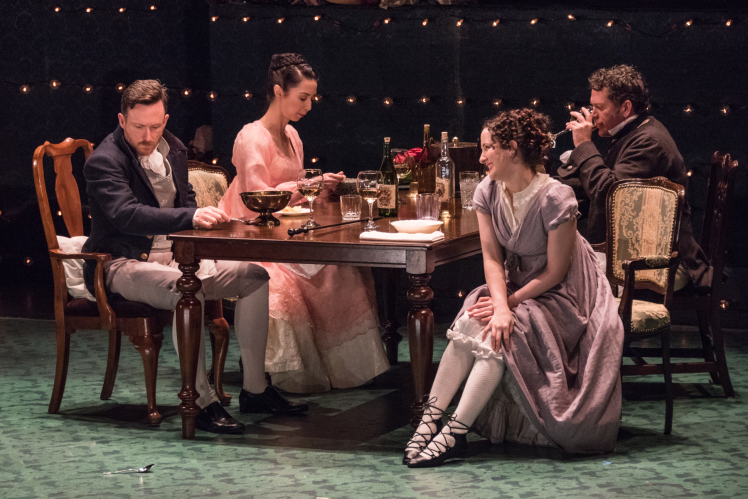 He Says: Vanity Fair The Inventive Bedlam’s Marriage to the Classic Pearl

He Says: Vanity Fair The Inventive Bedlam’s Marriage to the Classic Pearl 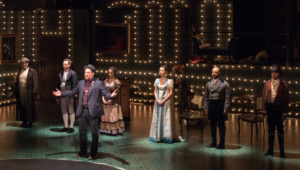 The wicked grin and the sly glance of the Manager, played with a devilish charm by the wonderful Zachary Fine, to see if his final hat toss landed as he hoped, sums up the incredibly inventive of the smart Vanity Fair currently being presented by the Pearl Theatre Company.  It’s a clever and creative adaptation of the famous 1848 William Makepeace Thackeray novel which, surprising to me, had the subtitle, ‘A Novel without a Hero‘ when published.  The tale of Becky Sharp, played miraculously and sharply by the writer of this adaptation, Kate Hamill (who did the same double duty on the award winning Sense and Sensibility last year for Bedlam) was first written and framed as a puppet play to be presented at a fair, to examine society’s treatment of women and the conventions of literary heroism.  Sharp as a character, despite her many stated and presented faults, emerges from the mess of her life as the hero, or what is now called, the antihero of this story. It’s a stellar reframing of a puppet play for a modern audience who may be bored by the straightforward historical approach to such classics, and needs a little Bedlam in their drama. Emotionally it’s a bit distant, but it makes up for that with frivolity and fun.

All the actors in this fine troupe play numerous roles, highlighted with slight but smart adaptations of dress (wonderfully fun costumes by Valerie Therese Bart), in a variety of different locales. It’s a complicated big story they are telling, which I will not attempt to summarize for you here, as half the fun is watching this meticulous and miraculous invention tell you their tale. In simplistic terms, Becky Sharp is the character we are meant to follow and get behind.  She is a moneyless schemer full of life and intelligence, not an angel and not the devil, determined to find a place in the world after being mistreated and maligned at an all girl’s finishing school.  She leaves the school with the sweet and naive Amelia Sedley by her side, with hopes of finding a respectful life, at any cost, and a well-off husband along the way.  It’s a smart and excellent portrayal by Hamill full of slyness, wit, and style.

Portrayed with the expertise of both a satirist and a fine period actor, Joey Parsons plays Becky’s friend, Amelia, the daughter of a business man and the betrothed to George (played with an over-the-top Zoolander charm by Debargo Sanyal).  The two woman are polar opposites of each other, leading us through an exploration of who is the hero of this tale and what exactly is an antihero.  Initially, Becky sets her sights squarely on Amelia’s wealthy but obese brother, Jos Sedley (sweetly played by the talented Brad Heberlee, who was just as wonderful in PH’s A Life) but when that fails, she tries her luck with the rich Crawley family. She ingratiates herself to their favorite wealthy aunt, Miss Matilda Crawley (winningly played by the game Fine) who likes Becky and keeps her around to entertain her with sarcasm and wit. In a moment of desperation, Becky tries to save herself by marrying Miss Crawley’s favorite nephew, Rawdon (a fantastic Tom O’Keefe) in order to avoid his father’s, the horrendous Sir Pitt Crawley (Heberlee), advances. A not-well thought out idea on Becky’s behalf, as Rawdon has no money of his own, but waits patiently for a possible family inheritance. While the elderly Miss Crawley loves scandal and particularly stories of unwise marriage, she does not want and will not tolerate an unwise marriage in her family, disinheriting her favorite nephew and Becky and leaving them destitute with no financial prospects. 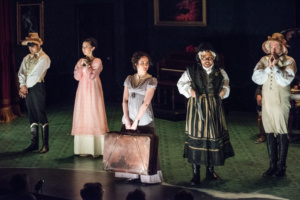 With all but the two female actors playing an assortment of characters that populate Thackeray’s satirical look at marriage and society as a whole (I particularly loved Quinn’s Miss Pinkerton and Heberlee’s Sir Pitt), the Manager playfully suggests we are as complicit as any in the play in our desire and fascination to watch these women suffer because of the snobbery and cruelty of society. That this is the form and style of entertainment that we choose for ourselves, watching this sad tale unfold, after a satisfying meal or intermission drink.  That we are much like the society of the late 1800’s, one where Thackeray sees all as flawed, even the most sympathetic. The Manager engages us directly throughout this fast paced 3 hour show, questioning with a smile our interest and the guilty pleasure of watching such a tale being told. It’s a wonderful and clever summation that the Manager extolls, scolding us while supporting us.  Vanity Fair is the perfect blend of the world of Bedlam‘s theatrical inventiveness with the more classic Pearl Theatre Company.  The modern infusing and tweaking the classic. This marriage is one very wise match indeed, no where near the disasters that are Becky and Amelia’s. And beyond all that praise, where else would also get to see the Thriller dance and a bit of Beyonce’s Single Ladies midway through the play? So just sit back, and enjoy.