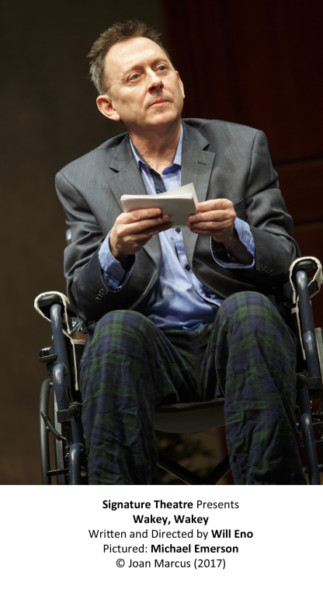 He Says: Wakey Wakey Put Me To Sleep

He Says: Wakey Wakey Put Me To Sleep 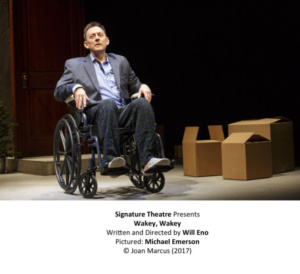 Will Eno is a much-honored playwright with an assortment of awards. He’s won an Obie Award, Lortel Award, the Oppenheimer Award, and a Drama Desk recognizing his plays, Thom Pain (based on nothing), The Flu Season, The Open House, and The Realistic Jones which I was lucky enough to see when it played on Broadway.  I had great hopes when I entered the Signature Theatre where he is a Residency Five playwright. I had a curiosity and an excitement about Wakey Wakey. Written and directed by Eno, I gave myself up to the unknown, and had no idea what to expect. But I can tell you this for a fact, I expected a lot more than what I was given. 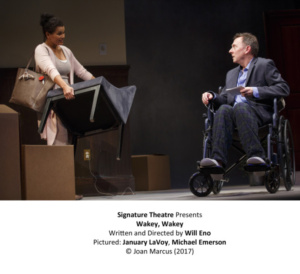 It begins with a compelling pop. A quick flash that caused my heart to jump. It was a momentary visual of Michael Emerson (Moises Kaufman’s Gross Indecency at Minetta Lane Theatre) as Guy, flailing on the floor, followed by a blackout. That image was abruptly replaced by a more serine vision of Guy calmly sitting in a wheelchair chair. He is surrounded by cardboard boxes with a doorway and plants on either side further back (scenic design: Christine Jones; costume: Michael Krass; lighting: David Lander; sound: Nevin Steinberg; projection: Peter Migrini). It looks like an apartment, where someone is about to move out, or in the process of moving in. I’m not sure. But don’t ask me which, because the answer would be a guess.  A stab in the dark trying to place meaning on the banal. 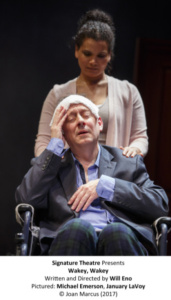 Guy begins chatting with us, breaking the fourth wall immediately. I’m not sure if we are audience members at a play or some other formal or informal gathering in Eno’s mind, regardless the fantasy engagement is cute and humorous. There doesn’t seem any reason we are having this moment with Guy, it seems random and sort of pointless, or at least I was missing the point. To be honest, even though I patiently waited (many did not), hoping to get some insight as to why we are gathered here, it never came to me. I made guesses based pretty much solely on the original image, but there wasn’t a moment when we are given a flash of comprehension or understanding. I would guess that this is some sort of meditation on ‘death approaching’. Maybe a cautionary tale on waking ourselves up to the world of possibilities and enjoying the moments we are given. I don’t know. 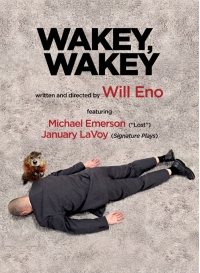 Guy became more confused and more agitated as we go along, especially once a sweet caregiver of some sort (a sweet portrayal by January LaVoy) shows up to offer him a cold compress and some modern dance (once again, don’t ask me why). To me her arrival was a godsend, as I hoped she would help guide us to some understanding. But as the play crept forward through its very long 75 minutes, her presence only seemed to slow the process down and mess up what little focus there was to begin with.  I was still waiting for some explanation for the boxes, for the doorframe, and for the meandering one-sided dialogue.

So I’m going to take a step back right now, and try to look at this piece in the same way I felt I had to in order to understand Good Samaritans, the play by Richard Maxwell that I saw recently at Abrons Art Center. I had a difficult time with that production, as Maxwell likes to try to extract emotional line readings out of his performances in order to dig down to the more human truth.  He’s one of those artists that require us to read up on his intentions before trying to consume his work. Eno is similar although in, what I consider, a less performance art kind of approach.  His plays have an essence of structure, but without the logical pathways of thought.  He has said of his work, that one shouldn’t come to his plays expecting tidy resolutions, clearly drawn narrative arcs or familiar characters. And if that is his purpose here, he has succeeded.  He also wanted people to experience this play as a thing that happened, rather than a play that you went to.  And I get that, but I’m still not sure what actually happened.  I could throw out some ideas here, but if there is pleasure to be had from Wakey Wakey, it may be in the game of guessing what that was all about. For this theatre junkie, Wakey Wakey put me to sleep.