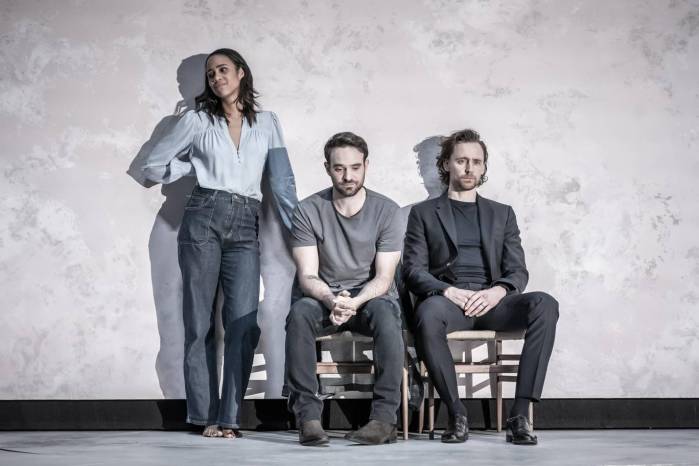 The future of an affair, in reverse, that’s the layout of Pinter’s Betrayal. Rotating against time within a stark white cube with shadows lurking on every wall daring us to forget the other. A triangle built with a ballet-like precision within a circle against a long rectangular wall. This is the essence of this masterful revival. They are poised for interaction from that first visual, one by one, in pairs (for the most part), as directed with tight thoughtfulness by the gifted Jamie Lloyd (Trafalgar Studio’s The Maids). The couples unwrap a series of betrayals, displayed quietly yet clearly between friends, lovers, and partners, served between sips as the clock turns backwards, beautifully structured and balanced, facing off against the things they don’t know are coming, but strangely we do. The pauses linger, and the responses to delicate questions are dangerously sharp and to the point, cutting to pieces the faith and trust of a marriage and/or a friendship. “I thought you knew that I knew“, but the smile and the astonished eyes say it all.

It’s breathtakingly simple in concept and design, ending just as it is beginning, on a stage brilliantly created by Soutra Gilmour (Trafalgar Studio’s Apologia), with impeccable lighting by Jon Clark (West End’s The Inheritance), and solid sound and composition by Ben and Max Ringham (NT’s Tartuffe) that perfectly dictates the revolve. Director Lloyd fastens our eyes on the tableau out front and the background intensely, giving us the units speaking their truths shrouded with lies, while allowing the other, who is definitively being compromised by the fabrications, hover and flinch at the mention of their name. It’s an astonishing depiction of the jab of betrayal, watching the one affected listening in, but unable to respond directly. The eyes of Tom say so much more when the question of a “different life” is lobbed from one betrayer to the other. That piercing glare registers the wound with more clarity than one knew existed in Pinter’s text. The chill of the affair careens off the back wall and stabs at the heart of the resting child.Within this stellar production, Betrayal never lets us off the hook, repeating the idea that deception is happening directly in front, but the essence of the other lingers painfully in the back like a ghost. It’s a powerful altercation, starring the fantastically elegant Tom Hiddleston (Donmar’s Othello, “The Avengers: Endgame”) leaning in quite brilliantly as Robert, the husband. His tense ease fills the space with pain and anger as effortlessly as his wicked smile gives off a nonchalant passivity. Zawe Ashton (Royal Court’s Rhinoceros, ‘Velvet Buzzsaw’) as the sensual Emma, the deceiving wife, is graceful in her flirtatious ways, desperate for the physicality of attraction and attention, and the gloriously sexy and intense Charlie Cox (MTC’s Incognito, ‘Daredevil’) as Jerry, the best friend of Robert and the lover of Emma, fills the space with his need and casual disregard for the morality of friendship. He’s hypnotizing in his sensual obliviousness, or is it his sly mistakes regarding desire and entanglements that pulls us in? It’s deliciously deceptive and magnetically enticing, the three, never giving us a moment to detach. We stay, engaged in their entanglements, even in those moments of powerful quiet contemplation of the acts they are committing.

Strikingly heavy with the stillness breathing loud, this Betrayal strikes hard. The Pinter play was first staged in 1978 featuring Penelope Wilton, Michael Gambon, and Daniel Massey, but seen on Broadway in the 2013 revival starring Daniel Craig, his real-life wife Rachel Weisz, and Rafe Spall at the Ethel Barrymore Theatre. Even though that production broke records in weekly revenue, the play felt fussy and overly produced, oddly stripped of its power and its passion.  Here void of locational references, the triangulational impact of the secrets and lies told within an extra-marital affair by all three lash out harder and pin point the pain of love and deception with an exacting punch. “He’s my oldest friend, how could you tell him?” Betrayal, it seems, is what they all do, to hold on to love and attachment, for the other and for the security within. And we are graced by the theatre gods to bear witness to it all, thankfully.