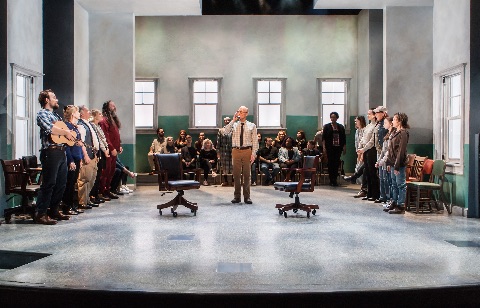 He Says: What’s Good For Otto is also Good for The New Group

He Says: What’s Good For Otto is also Good for The New Group

“Sometimes I think she doesn’t have a clue, the way she has this annoying habit of jumping on some offhand remark” and I would say that many a patient have had the same thought as Barnard does of his therapist, Evangeline Ryder, and I did with Dr. Michaels idea of song, but it is in the details where Good for Otto finds its salvation.  Treatment, giving or receiving, is no fairy tale; there are no three bears, seven dwarves, or a gingerbread house in the woods, only wolves and monsters. And there are no happy ending for some, but giving care, no matter the cost, is a worthy profession, and in many ways, Rabe gives some honor and warm grace to these two who try.  They are not perfect, much like this play, but they are human, and all humans are in need some days of care and a pat on the back, and maybe a good stiff drink at the end of the day.  I know I do, sometimes. So raise your glass to congratulate the company of Good for Otto, they deserve our salute and our applause for a job well done.

Genevieve Rafter KeddySeptember 14, 2022
Read More
Scroll for more
Tap
Mamas of Broadway Will Go To Ruthie Ann Miles and Her Family
Meet The Cast of The New Off Broadway Musical Goldstein