Head of a Sad Young Woman 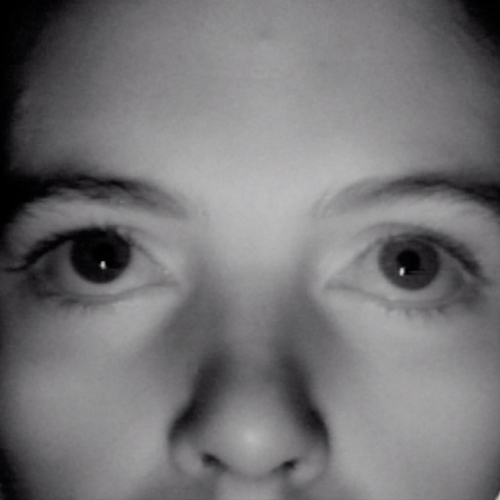 Head of a Sad Young Woman

One of the most influential pioneers of video art, peter campus began making single-channel videos and interactive installations in the early 1970s. He is widely acclaimed for his videos, installations, and large body of photographic work, which focuses on psychological and physiological states and explores the relationship between the subject, viewer, and artist.

Head of a Sad Young Woman (1976–1977) is a tightly cropped portrait of a woman positioned close to the camera. She is still and stares into the lens for the entire length of the videotape. Intensified by campus’ use of high-contrast black-and-white video, the woman conveys intense sadness as she seems to glower at the viewer. In this Midnight Moment iteration of Head of a Sad Young Woman, campus suggests a quiet power the woman has over viewers as her gaze towers over Times Square.

“i asked the person participating to sit in front of the camera not as an object, but as someone projecting to the camera some feeling, some thought, non-verbally; i asked them to look at the lens as steadily as they could for the entire length of the video cassette, twelve minutes. at the end of the recording we looked together at the video, and made adjustments separately, she in her performance, i to the visual components. then recorded again, and again until we were satisfied.”

“Faced with her melancholy, it is hard not to reflect on recent discussions about sexual misconduct, reproductive rights, and inequality. The work’s monumental size and emphasis on looking also creates the sensation that one is being observed. In a world dominated by smart devices, drones, and companies selling customer data, the questions of surveillance and who controls our image are especially relevant. The introspection invited by this work is displayed to its full advantage in the context of Times Square — a location that embodies the breadth of human experience.”

Head of a Sad Young Woman is presented in partnership with The Bronx Museum of the Arts’ survey exhibition peter campus: video ergo sum, on view March 6–July 22, 2019, and on the occasion of the artist’s public discussion at The Armory Show with Tina Rivers Ryan, Assistant Curator at the Albright-Knox Gallery, on March 10th at 3:00pm. Cristin Tierney Gallery will also have a booth of campus’ single-channel videos on display at the fair from March 6-10, 2019 in the Galleries section in booth #827, and the gallery will open at its new location — 219 Bowery, Floor 2 — with work by campus on view. Performer: Jennifer Hilton

peter campus (born 1937, New York City) is a seminal artist in the canons of new media and video art. After receiving a Bachelor of Science in Experimental Psychology from Ohio State University in 1960, he studied at the City College Film Institute. He worked as a film editor and in film production, last for the Metropolitan Museum of Art. He then followed his dream to be an artist, becoming a pioneer in video art in 1970. His initial video works were performance based, many made at WGBH in Boston at the New Television Workshop. He won a Guggenheim Foundation award in 1975, a National Endowment for the Arts grant the following year, and received a fellowship at MIT’s Center for Advanced Visual Studies in 1976. In 1971, he began to show his video installations in the U.S. and Europe and is still showing in ever widening circles. petercampus.net

The Bronx Museum of the Arts is a contemporary art museum that connects diverse audiences to the urban experience through its permanent collection, special exhibitions, and education programs. Reflecting the borough’s dynamic communities, the Museum is the crossroad where artists, local residents, national, and international visitors meet. The Museum was founded in 1971 by a group of local residents to bring the visual arts to the borough. To this day it remains the only fine arts museum in the Bronx. The Museum’s permanent collection is now composed of more than 2,000 works of art in all media, conveying a broad range of modern and contemporary art practices. Since 2012, The Bronx Museum features a Free Admission policy that has increased attendance from a modest 20,000 annual visitors to up to 100,000 today, and deepened the Museum’s role as an accessible, community-focused institution. bronxmuseum.org

The Armory Show is New York City’s premier art fair and a leading cultural destination for discovering and collecting the world’s most important 20th and 21st century art. Staged on Manhattan’s Piers 92 and 94, The Armory Show features presentations by leading international galleries, innovative artist commissions, and dynamic public programs. Since its founding in 1994, The Armory Show serves as a nexus for the international art world, inspiring dialogue, discovery, and patronage in the visual arts. thearmoryshow.com

Cristin Tierney Gallery is a contemporary art gallery committed to the development and support of both established and emerging artists. The international exhibition program emphasizes critical theory and art history, with an attendant interest in under-recognized artists and art movements of the 20th and 21st centuries. cristintierney.com