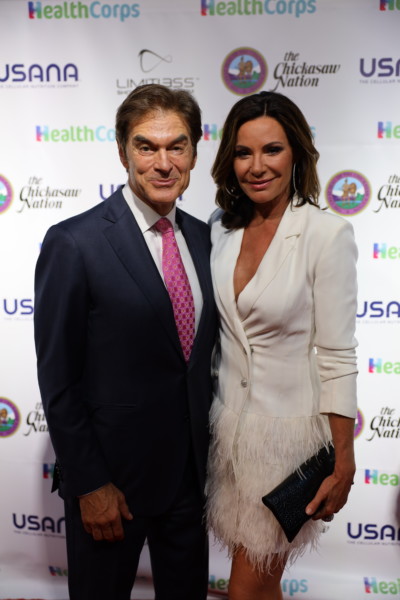 It was a magically wild night in Central Park when HealthCorps threw their 15th annual benefit with the themed party “Rendezvous at the Zoo.”

The national organization founded by Dr. Mehmet Oz and Lisa Oz, hosted its annual charity gala to benefit the organization that addresses health inequities in at-risk communities by educating and empowering teens – encouraging them to become change agents within their family, their school, and their neighborhood.

“We started out as an effort to help that community, and the city got behind it,” said Dr. Oz on the red carpet. “Mike Bloomberg was there, back then, and it has exploded. We now have raised over $80 million. We touch a quarter of a million kids a year… the foundation now has learned how to do it very inexpensively, so we can reach any community, especially underserved ones since COVID.”

The glitzy soiree captivated the hearts of hundreds of attendees that gathered under the stars and near New York City’s most famous animal kingdom with the likes of such notables as the leading medical professionals and celebrities including “Real Housewives of New Jersey’s” Melissa Gorga, Margaret Josephs, Jackie Goldschneider; “Real Housewives of New York” star Luann de Lusseps; Maria Menounos; “Fox 5’s” Rosanna Scotto and Ines Rosales; Charly Arnolt; Governor Bill Anoatubby of the Chickasaw Nation; Jack Hidary, director of Quantum and AI at Alphabet.

Cocktails were joyfully toasted near the landmark seal rock before guests sat for dinner where they heard divine performances by Tony Award nominees Derek Klena and Kate Baldwin.

As the zoo’s penguins in the atrium nestled in for the night, the party animal humans took to the dance floor. They only stopped for a surprise appearance by mayoral candidate Eric Adams.

Truly it was a party to remember for the season, especially since it benefited such an important cause.

HealthCorps annual benefit is in support of their continued contributions toward the health and well-being of America’s youth to provide its programming to over 250,000 high need students in the 2022 school year.