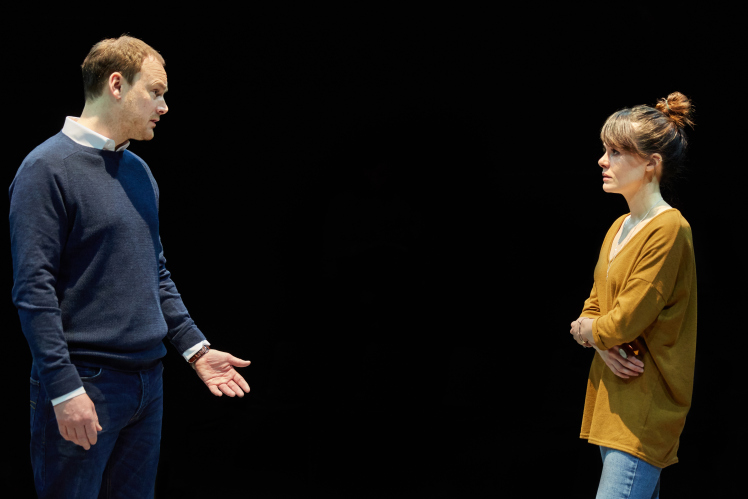 Ross
An intense piece of theatrical writing by playwright, Brad Birch (Black Mountain), drawing us quickly into the moon like circle and building on our curiosity inch by inch and minute by minute. We lean in as the two solid and emotionally attached/detached characters, Tom and Sophie circle around each other, looking for the weak spot in their armor. Sherman Theatre’s Tremor is the play, but also what is felt here as part of the #BritsOffBroadway series continues, as these two feel rooted and twisted together in a past tragedy that slowly reveals itself with each revolution of the stage. It’s tense and exhilarating, as directed neatly and with an increasing level of anxiety by David Mercatali, the same director who brought the wonderful Radiant Vermin from Tobacco Factory Theatres/Soho Theatre to 59E59 Theaters last year. And starring two very capable and gifted actors, Lisa Diveney (Donmar Warehouse’s Moonlight) and Paul Rattray (Young Vic’s Three Sisters) who do a sexually charged dance around one another, scratching at the pain in their souls that is just itching under their skin.
These two damaged warriors were among only a handful of passengers to survive a bus crash four years earlier. The driver was blamed and punished. And these two were a couple back then, and judging by their strong and sensual chemistry on this day of reconnection, it was a powerful one, but one that was unable to stop their lives from falling apart in the aftermath of the event.  We can’t help but see how Rattray’s Tom looks at her, and we can’t help but wonder why.  He also can’t quite understand how this all came to be, and why she is standing in his newly created family’s home so many years later after no interaction. Why is he so nervous? And what does she want? These and other questions bounce around as they circle each other, warmly engaging while also jabbing and scratching at one another. At first Diveney is the one we can’t take our eyes off of, but that is where the slyness comes, tricking us into thinking this is about her more than him, making the shift all the more impressive from them both. But the tables turn quickly as the dinosaur watches on reminding us what is at stake for Tom, and this piece goes into the realm of accusations and revelations that one never saw coming.
It’s a beautifully urgent and electrifying tango, frighteningly revolving around fear, judgement, punishment, and panic attacks.  Sam Jones (NT/Schaubühne Berlin/59E59’s Iphigenia in Splott) works his sound magic in this small space, bringing the thumping and pounding of the heart into our own, speeding it up until it is almost too much to handle. His creations pull us back in when our attentions start to lag, tapping us aggressively on the shoulder, asking us to sit up and re-engage. Production designer, Hayley Grindle (Sherman’s The Borrowers) and lighting designer, Ace McCarron (Sherman’s Dracula) simplify the space, trying to not pull us out of this dance, nor distract from this tense court of justice. They rather create an empty space for these two to come face to face once again and revisit that tragic day, pulling apart what happened afterwords and how it went so wrong. The shades and vantage points are extreme, solid, and very current in societal themes, causing us to leave the theatre disturbed, just like Sophia, horrified with the turn of events. Surprised but not.  Invigorated but completely unsettled by the twisting of the knife. Metaphorically speaking.