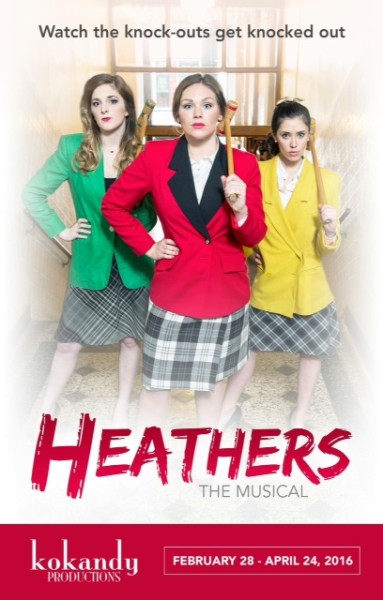 Heathers the Musical – Never Has Mean-Spiritedness Madness Been So Much Fun!

Heathers the Musical – Never Has Mean-Spiritedness Madness Been So Much Fun! 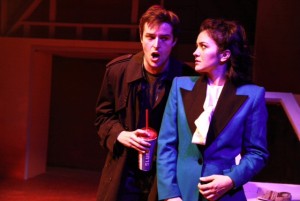 “What’s your damage, Heather?” Very little actually, in this mean-spirited yet highly enjoyable ode to overcoming the mean girls who ruled high school. Based on the 1988 Winona Ryder, Christian Slater and a pre-Beverly Hills, 90210 Shannon Doherty cult film of the same name, Heathers the Musical is a dark but delicious story of a triumphant underdog outsider, who becomes the ultimate insider, but at what cost? Directed by James Beaudry with camp flair, music, lyrics and book by Laurence O’Keefe and Kevin Murphy, Kokandy Productions has unveiled a show that ushers in spring with bold shoulder pads, brazen, brightly colored blazers with matching hair scrunchys. The film was originally a fantasy revenge tale, that in a post-Columbine world, has been proven, time and time again to be terrifyingly real, but reality is not what this cotton candy colored throwback to the 1980’s is all about. To any fan of the film, all the classic lines are here. “Gotta Motor,” “Lick it up baby.  Lick….it….up” and the unprintable quip about a sex act with a “chainsaw,” however you need not to have seen the film to enjoy the fun staged nightly at the Theater Wit. Everyone can relate to woes of the jock, loser, geek, prom queen, and any other archetype one associates with high school. If you haven’t seen the film, Heathers the Musical is a contemporary rock and roll show that plays like Mean Girls meets Legally Blonde blended with a hearty dose of Carrie. 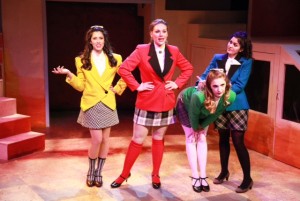 Our tale starts with brainy misfit, Veronica Sawyer (a dazzling Courtney Mack) hoping her senior year will begin without torment. The monocle, yes monocle, wearing, seventeen year old is not part of the popular crowd or in with the cool kids. Her best friend, the zaftig Martha “Dump truck” Dunnstock  (a delightful Teressa Lagamba) is also a lovable loser, who can quote from The Princess Bride at will, over freshly made Jiffy Pop, of course. The school is ruled by a terrifying trio known as “The Heathers,” as in McNamara, Dean and Chandler. Described as “the lip gloss Gestapo.  They float above it all”  Veronica accounts. “Heather McNamara (Rochelle Therrien) head Cheerleader whose Dad is loaded.  Heather Duke (Hayley Jane Schafer) runs the yearbook, but has no discernable personality and Heather Chandler (Jacquelyne Jones) the almighty. She is a mythic bitch.” This ruthless clique is the envy of all of Westerberg High. “This is not high school, it’s the Thunder-dome.” When caught skipping class and hanging in the ladies room “Grow up Heather. Bulimia is so ’87” Veronica utilizes her talent for perfect forgeries to get the Heathers out of after school detention. “Can you do prescriptions?” Heather Duke inquires. “Shut up, Heather!” After a quick hot girl make over, Veronica  lands herself a spot at the cool table, but at a cost. Veronica must hurt and alienate her actual friends to hang with the Plastics, err, the Heathers. 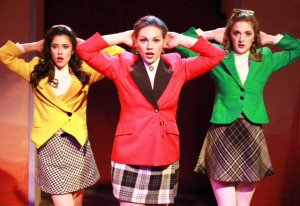 After meeting the hot and dangerous new bad boy at school, J.D. (Chris Ballou) Veronica’s burgeoning crush decides to help her navigate through her teen-aged hell. The charming song “Freeze Your Brain” is a delicate flirtation sung about 7-11 Slurpees, and each other. At a party, Veronica makes the critical mistake of drinking too much and vomiting while fighting with head Heather, McNamara. Realizing her social suicide, Veronica decides to go to McNamara’s house the next day to beg for forgiveness. With J.D. in tow, Heather is not so forgiving. She is “hot and pissed and on the pill” and wants to make Veronica suffer. Then, accidentally drinking a cup of poisonous drain cleaner jokingly poured by J.D., the queen of the baddies dies. Using her master forgery skills, Veronica and J.D. make it look like Heather has committed suicide. A short time later, J.D. and Veronica, now the Bonnie and Clyde of high school eullies, murder cruel and vacuous football players, Kurt Kelly (Garrett Lutz) and Ram Sweeney (Denzel Tsopnang) after they start a horrible rumor about Veronica. The “swatch dogs and diet coke heads” of this Ohio high school buy the story these two have committed a joint suicide pact to hide their forbidden gay love for one another. “I Love My Dead Gay Son,” one of the most quotable lines from the film, is turned into a full production number here with Diego Colon singing lead to both frenetic and preposterous results. “My teen-aged angst has a body count” Veronica laments. 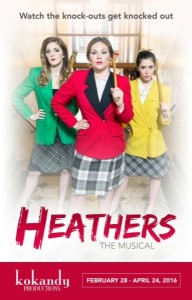 The highlight of the production for me, the sharp and dynamite choreography from Sawyer Smith. Blending a mix of Club MTV panache, with the crisp moves of the Fly Girls from In Living Color, and heavy girl group influences of The Shirelles to En Vogue, Destiny’s Child and The Pussycat Dolls, the cast was aptly energetic. The act one, slow motion fist-fight scene between Lutz, Ballou and Tsopnang must be personally witnessed to be believed in all of its hysterical glory. Then there are the songs. Musical Director Kory Danielson arranges a litany of powerful voices from the entire troupe set to the back drop of a pulsating, thumping rock and roll score. From the charming opening number of “Beautiful,” to the mean spirted “Candy Store,” Veronica’s woeful “Dead Girl Walking” to the elegant act two Martha Dump truck, err, Dunnstock ballad “Kindergarten Boyfriend” this soundtrack impressed from start to finish. Conversely, the minimalist set design by Ashley Ann Woods was a constant reminder this is a smaller theater company on a drastic budget.

By the end of the show, Veronica realizes the unmitigated mistakes of dating the bad boy. “I Am Damaged” a powerful duet between JD and Veronica, played out as they struggle with a gun. I like this heroine is no weak willed, dainty flower. A strong voice, Mack proving she can carry any material given to her. Veronica has to save her school, her classmates and her soul. Plus, she has college applications to complete after all!  Assuming control of the powerful red hair scrunchy, Veronica exclaims, “Heather, there’s a new sheriff in town! ” In this case, there are two. Mack’s Veronica as well as Kokandy Productions arrestingly entertaining Heathers the Musical. With tongue firmly planted in cheek, this cautionary tale of high school haves and have-nots is not to be taken too seriously. This is a celebration of the taking down the gentrified, Barbie budded 1%, not a how to anecdote on unspeakable school violence. “As if?” Oh wait, that line is from Clueless, one of the few films not being turned into a musical. Yet, anyway. I am clearly getting my high school blondes confused. Buy your tickets while you can. Many shows are already completely sold out. Pretty In Pink meets The Terminator with a beat you can dance to, Heathers the Musical is a camptastic delight.  “How very….”