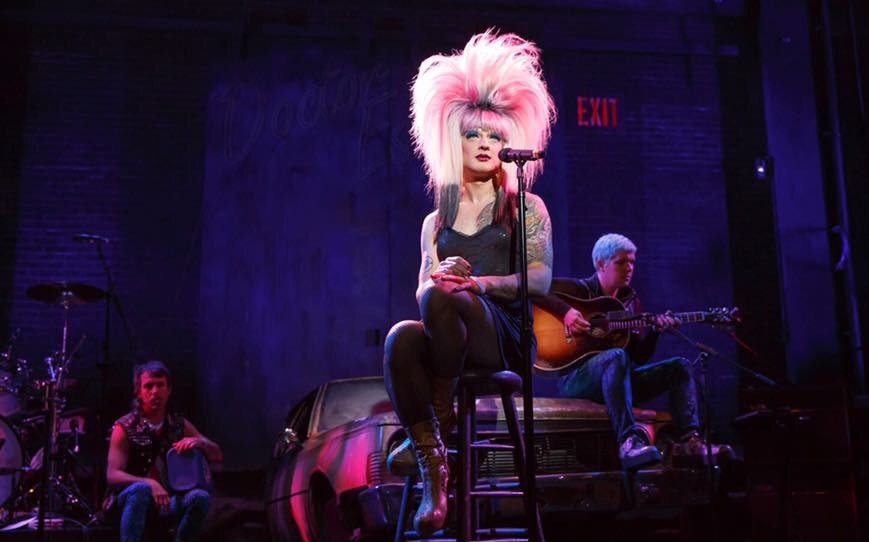 Hedwig – This Inch Runs a Mile!

Hedwig – This Inch Runs a Mile! 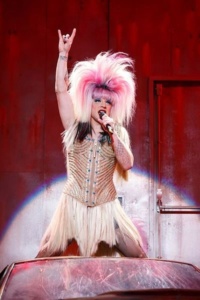 Brace yourself Chicago. There is a massive storm blowing into town and this one was has nothing to do with Mother Nature. The four time Tony Award-winning Hedwig and the Angry Inch is taking the Oriental Theatre prisoner for two weeks, and all should happily surrender to this East German musical enchantress.  For those not in the know, Hedwig is the brainchild of writer/actor John Cameron Mitchell and composer Stephen Trask. This East German Glam-Rock Goddess wannabe is dressed accordingly for rock and roll battle against oppression, intimidation, coercion and her ex-lover, Tommy Gnosis. Mr. Gnosis has eclipsed both Hedwig’s affections and fame.  This razor-sharp combination of memoir and cabaret club act, with its own signature pounding bass backup, is a fourth wall smashing powerful and poignant modern-day musical.  Part live concert and part performance art piece, Hedwig head bangs as she heartbreaks.  How will this heroine with “morally ambiguous hair” play to a Windy City crowd?  Well, the faces exiting the theater were seriously priceless.  From the thoroughly entertained (like me) to bewildered, not certain what they had just experienced. I have to tip my hat to Broadway in Chicago for bringing this riskier and risqué piece to town. Chicago proved itself a sanctuary city during the last election cycle, so bearing that in mind, Hedwig should find a financially comfortable home here. 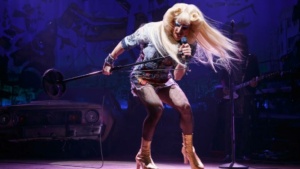 Who exactly is the mysterious front woman, Hedwig? Self described an “Internationally ignored song stylist” this comedic chameleon chanteuse, adorned in fishnets, golden stiletto heeled boots, and more blonde wigs then three season’s of RuPaul’s Drag Race, is gender fluidity personified. The character spent his unhappy childhood in Berlin, escaping from an abusive and neglectful set of parents by listening to the sugar coated world of 1970’s soft pop music. Next, dealing with the ramifications of a whirlwind romance with an American soldier that ended in a botched sex-reassignment surgery.  Finally, a move from the familiarity of a housing project in Eastern Europe to a trailer park in the American sticks.  Whew!  The pedigree of talent who has brought this colorful character to life is quite impressive. Back in 1997, John Cameron Mitchell was the author and original star. Fast forward to 2014 and the 4 time Tony Award-winning revival was the hardest ticket to get on Broadway, in no small part, because Neil Patrick Harris was playing the central character.  After he won the Tony and departed the show, The Book of Morman’s Andrew Rannells, Dexter’s Michael C. Hall, Rent’s Taye Diggs and finally Glee’s Darren Criss all took their turn stepping into those familiar fastidious fishnets.  For the tour, it is Tony Award-nominee Euan Morton who is now breathing life into the old gal. Morton is best known for originating the role of another flamboyant singer, Boy George, in the musical Taboo that ran in both London and New York.  Morton’s strong vocals and naughty charms make the rough edges of the character extraordinarily forgivable. Seemingly egocentric and self-indulgent on the surface, then heartbreakingly vulnerable at the character’s core.  “Hello Chicago” he chanted to the main floor audience and “Hello Evanston” he quipped, gesturing to the upper balcony, kidding about the uptight suburbanites taking in the show, but from a safe distance. 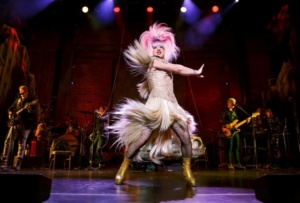 Surrounding Hedwig is her talented supporting band, The Angry Inch otherwise knows as Tits of Clay.  It is significant to point out music director and keyboard player Justin Craig, bassist Matt Duncan, guitarist Tim Mislock and drummer Peter Yanowitz, all of whom originated their roles for the 2014 Broadway run, have returned for the national tour, continuing to bring this fabulous fresh music to the masses.  The final member of this collective of delightfully compelling misfits is Yitzhak (Hannah Corneau) Hedwig’s long suffering stage hand and spouse. Corneau’s voice also spectacular, triumphantly displayed during Whitney Houston’s “I Will Always Love You” the only cover in a show of all original music.  From the naughty “Sugar Daddy” to the stunning “Origin of Love” this soundtrack will stay with you long after you have left the theater. 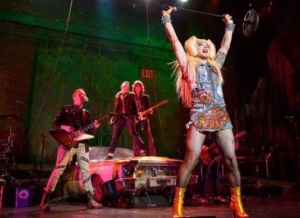 The creative team behind the scenes clearly had a field day sculpting the unique world of Hedwig. I must confess, I did see the show in New York, surrounded by the most devoted of fans and that magical experience is hard to replicate. For the tour, the scenic design of Julian Crouch has been simplified a bit, but will still impress.  Arianne Phillips’ costuming and Mike Potter’s hair and makeup designs defy logic, reason and gravity, in the most spectacular of ways. The dress made from hair, jokingly referred to as “Sarah Jessica Parker” during the show, drew audible gasps from the audience the night I attended.  Benjamin Pearcy for 59 Productions’ projection design and John Bair/Phosphene’s animation is spot on perfection. Kevin Adams’ lighting is concert going appropriate. Well, as appropriate as anything can be in Hedwig’s mad world. Director Michael Mayer is at the helm of a rag tag band of mischievous miscreants, keeping the pace steady and the focus on the rollercoaster life that is Hedwig’s experiences. 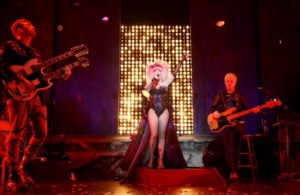 Recommended for mature audiences, Hedwig and the Angry Inch is a great night of edgy performance art. While everyone may not openly relate to the story’s transgendered headliner, we certainly have all experienced being let down by the people we thought we loved. Every person in attendance can also relate to feeling like the underdog or the under-appreciated, and who hasn’t taken a metaphorical pie to the face from time to time. Hedwig experiences it all, maintaining her composure with a smile from her glitter kissed lips and a spray of her crafted signature scent, Atrocity by Hedwig. Chicago is certainly the “Wicked Little Town” where Hedwig should plant comfortable roots, at least for its two week run in March. I will quote from the lyrics of the song “Wig In A Box” as I conclude my review.  “I put on some make-up. Turn up the eight-track. I’m pulling a wig down from the shelf. Suddenly I’m this punk rock star of stage and screen and I ain’t never, I’m never turning back.”  Neither should we.

Hedwig and the Angry Inch is currently playing at the Oriental Theatre through March 19, 2017