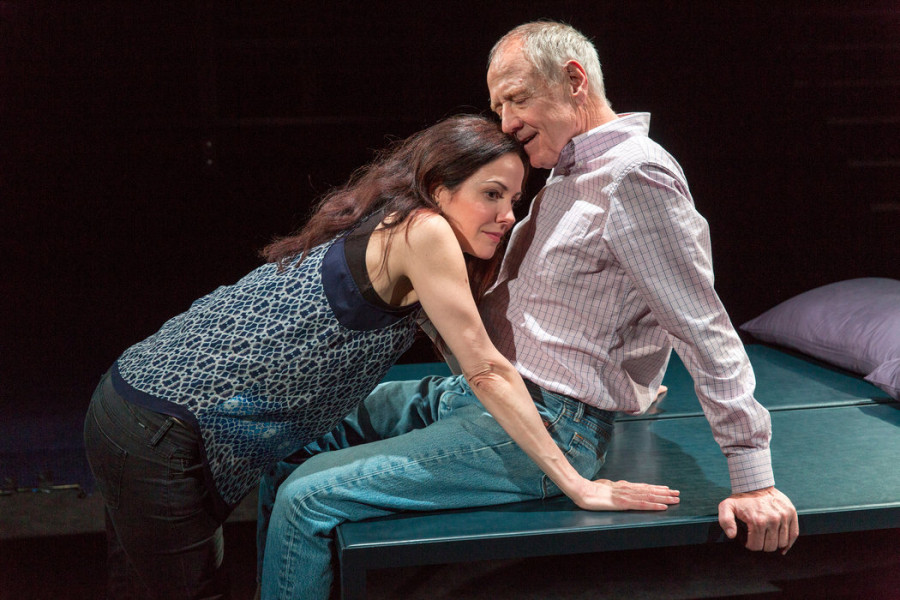 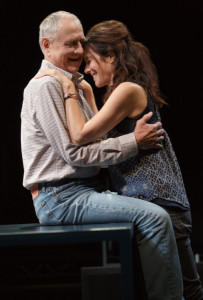 Simon Stephens’ Heisenberg on Broadway is only 80 minutes long, even that is too long with Mary-Louise Parkers, horrible grating whinny vocal tones and staging that is obstructed, no matter where you sit thanks to director Mark Brokaw. The producers have found a way to get their money back, but it doesn’t help the audience navigate or connect with the actors. The stage at MTC’s Samuel J. Friedman Theatre is a narrow long hallway thanks to Mark Wendland set of two steel tables and chairs, with ten rows of stadium seating placed on the stage. Seriously this is a set where the actors Ms. Parker and Denis Arndt push these pieces around.

The story follows Georgie, a friendless 43-year-old women (Parker) who stalks, Alex a 75-year-old man (Mr Arndt’s), a butcher who’s been celibate since the 1950s from train station to his butcher shop. All the while insulting him about age, personality and talent. By scene three the two have pushed the steal tables together and are in bed together, but in all honesty, I do not know why? Georgie is unhinged and Alex is not a guy looking for a younger women to pick up on. He is content in his loneliness, resigned and to live inside the CD’s he collects. What Georgie does is jump start his life, as this play puts the audience to sleep. The problem is I just did not believe this romance for a single second.

What I did like discovering was the understated and charming Denis Arndt, who tries to salvage this piece. His look of falling for this quirky, woman who can barley tell the truth is splashed all over his face. You see his wanting to be in love despite his age and willing to look past Georgie’s flaws and unloveable attitude until the very end.

If this is the follow up to Mr. Stephen’s The Curious Incident of the Dog in the Night-Time, I not sure I care to see what’s next.

Why this play is called Heisenberg is beyond me, as there was nothing explosive or chemistry that was exciting to watch. Why Georgie and Alex get together makes no sense either. How this play made it to Broadway is a mystery to me.