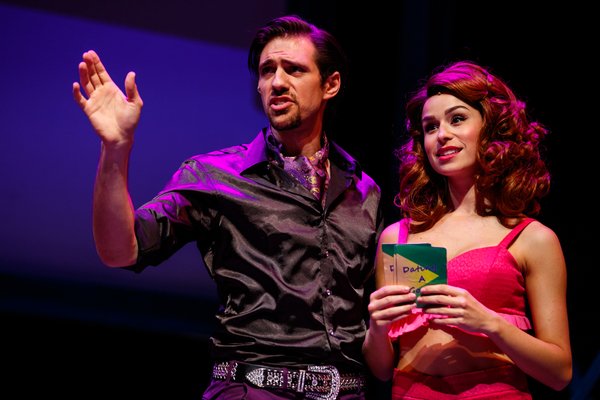 Helldrivers of Daytona – Crash and Burn!

Helldrivers of Daytona – Crash and Burn! 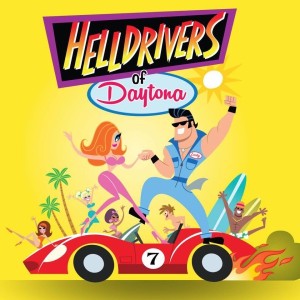 What a misfire!  The Royal George Theatre was revving into fall with the opening of the heavily hyped World premiere new musical, Helldrivers of Daytona. Alas, this musical farce pulled in dead on arrival.  Chocked full of tasteless boob, crotch and period jokes, unending misogynist song lyrics, incest references, and more, this gutter-minded, witless failure limped along for over 2 hours and 35 minutes, like a car driving with a quartet of flat tires. Completely shocking when you realize the creative team behind the scenes. Seven time Emmy Award-winner Mark Saltzman is the book writer with music by Berton Averre, lead guitarist of The Knack responsible for the number one hit “My Sharona” and lyrics scribed by Grammy Award-winner Rob Meurer. It is a good thing they don’t take awards away from people, with the exception of Milli Vanilli, who look like Luther Vandross when compared to the drivel that was Helldrivers. Directed by Danny Herman and choreographed by Danny Herman and Rocker Verastique, Helldrivers aspired to be a spoof of the 1960’s Elvis-style rock movies set in the world of NASCAR. Featuring a Chicago cast and targeting Broadway intentions, we all know what the road to Hell is paved with…. The script felt like an unending Fraternity Party that successfully and unceremoniously roofied the entire audience. 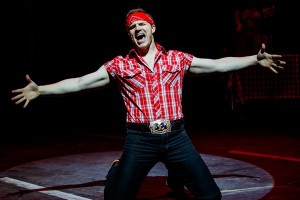 The story centered around country boy racer, Lucky Stubbs (James Nedrud) currently down on his luck, who hopes to win the win the 1965 Daytona Speedway Jackpot 500 and use the prize money to open a chain of stores. His rival, European driver, Count Porcini Portobello (David Sajewich) a bisexual, multi-personality, elephant trunk underwear sporting cartoon caricature of a rogue. Hanna Barbara never drew such a one dimensional, fundamentally laughable villain. The object of both of their affections, Pepper Johnson (the always dazzling Samantha Pauly who deserved so much better than this!) as an Ann-Margaret inspired, wasp-waisted, lusty red head, who drove in from Apalachicola, Florida on a quest to fall in love with an international racecar driver. All three performers have great voices squandered by these juvenile, sophomoric song lyrics requiring them to cluck like chickens at the point of orgasm.  Yes, I kid you not. Cluck…like…..chickens…..Ba-kack! About half an hour in, Lucky’s personal little lucky had its own solo crotch spotlight. Oh boy.  The secondary couple, Lucky’s manager, Pitstop (Andres Enriquez) and Margaret Ann Olson (Julia Rose Duray) a Jersey tawkin’ like ‘dis, tom boy of a girl, flirt and coo until their act two duet when she sang about her period, in graphic detail, and wished him dead.  Ah, young romance. Can there not be one redeemable, relatable character in this entire mess? The rest of the cast is a cornucopia of surfers, bikini babes, motorheads, and stereotypes,  including Kahuna (Trey Curtis) a heavy set surfer turned pot smoking mechanic, brainy Cardoc (Aaron M. Davidson) and himbo Horndog (Chris Selefski) partnered with dominatrix wannabe, DeeDee (Claire Lilley) self-flogging Mary Lou (Rachel Melius) and her Jesus complex and finally, Laura (Leah Morrow) who aspired to replace her mother in her father’s bed.  Seriously, everyone involved with this production deserved better than this. 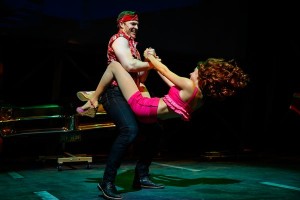 There was a throwaway joke about a “Eurotrash code of honor” during the second act that left me wondering about an “artistic code of honor” sorely missing from this production. This show had previously been workshopped in Austin, Texas. Did no one realize what a flop they were crafting then? This poor Windy City cast was taken for such a bumpy, pot hole road damaged, ride by a script that ran out of gas and fired on zero cylinders from the very beginning.  I will give honorable mention to costume designer Brenda Winstead, projections designer Ross Hoppe and artist Glen Hanson, commissioned to create the pop art marquee poster.  This lucky trio emerged relatively unscathed, while the rest of Helldrivers creative team crashed and burned.  Detouring away from good taste and driving smack dab over any ounce common sense, Helldrivers of Daytona was an offensive, underdeveloped and overly long show that wanted desperately to be a cult hit, like The Rocky Horror Picture Show or one of the many 50 Shades of Grey parodies currently touring the country.  I never thought I would sit through anything worse than that 50 Shades nonsense. I was wrong! I would suggest putting pedal to the metal and making skid-marks driving away from the Royal George and their latest production, but the entire run of this dud has already been (thankfully) cancelled. Perhaps to be retooled, but, honestly, sometimes a lemon is just that.  Helldivers should be headed straight to the creative scrapheap junkyard. 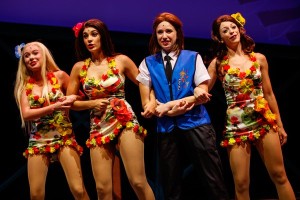 Helldrivers of Daytona opened and closed on Monday September 12, 2016 at The Royal George Theatre