Yesterday evening, at the Shubert Theatre, the cast of Hello, Dolly! celebrated the birthday of their leading lady, Bette Midler, with an on-stage surprise party in front of a sold-out audience filled with Ms. Midler’s adoring fans. 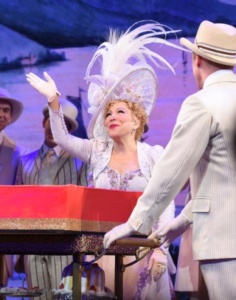 Following the bows, the cast of the reigning Tony Award®-winner for Best Musical Revival led the audience in an impromptu rendition of “Happy Birthday.” Cast members then brought out champagne and a gigantic birthday cake to toast Ms. Midler. The custom cake was decorated with the album cover artwork of The New Broadway Cast Recording of Hello, Dolly!, which recently received a 2017 Grammy® Award nomination for Best Musical Theater Album. 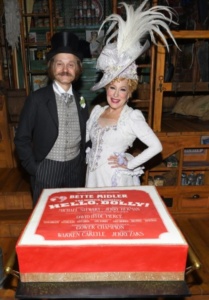 Ms. Midler, who received universal raves for her performance, as well as all of the top honors in the American theater, including the 2017 Tony Award for Best Actress in a Musical, will end her already-legendary run on Sunday evening, January 14 with a final performance that will be a special benefit for The Actors Fund. 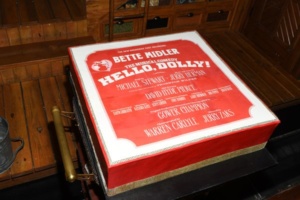 The Cake Photo by Noam Galai/Getty Images for “Hello, Dolly”

Starting Saturday evening, January 20, two-time Tony Award winning “theatre goddess” Bernadette Peters will take on the title role of Dolly Gallagher Levi in the most successful and beloved production of the year.