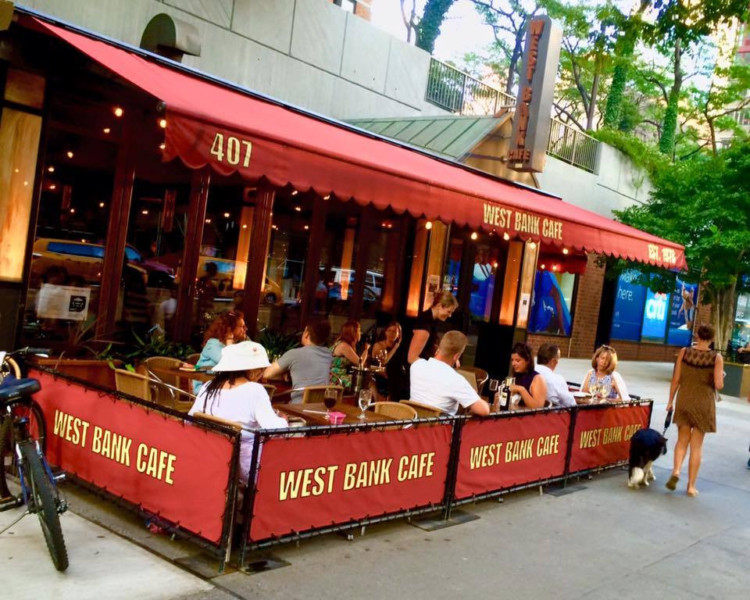 The West Bank Cafe, 407 W 42nd Street is also home to the Lauri Beechman Cafe. The owner Steve Olsen, has survived cancer, a kidney transplant, and fully recovered when his leg was entirely crushed after a parks vehicle ran over him while jogging. Steve has given back a thousand times over.

a GoFundMe page has been set up.  If we don’t come together as a community and raise the necessary funds this landmark like The 21 Club could drift away. They have already raised $143,205 of their $250,000 goal, with 186 people donating.

The Laurie Beechman Theater, is where Joan Rivers performed her final set. It is the room where the original cast of Sunday in the Park With George rehearsed, the Tony Award winning play Sideman debuted, where Aaron Sorkin’s first two works were produced, not to mention the countless Oscar, Grammy, Emmy, Tony, and MAC award winning artists that have graced the stage over the decades.

So many actors, writers, producers have been a guest at The West Bank Cafe or The Laurie Beechman Theater. Bruce Willis was a bartender in the restaurant Tennessee Williams, Arthur Miller,  Sean Penn, Patti LuPone, Brian D’Arcy James, Neil Simon, Alice Ripley, Athol Fugard, Christian Borle, Joe Iconis, Kerry Butler, Jonathan Groff, Chris Noth, Telly Leung, Danny Aiello and more either ate upstairs, attended a show there or celebrated an opening night. I can not even count the amount of times I have had meetings there, celebrated birthdays, attend cabaret shows or even performed there.

The Save West Bank Cafe Virtual Telethon will stream free of charge beginning at 12 pm EST on Christmas Day (December 25th) at www.SaveWestBankCafe.Com The event will feature a day’s worth of holiday music, stories, greetings, and West Bank memories from an ever-growing roster of talent. Donations to Save West Bank Café can be made now or during the telethon on the show’s website.