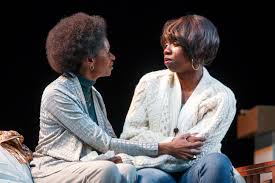 Her Portmanteau Where Bitter Resentment Engulfs A Play

Her Portmanteau Where Bitter Resentment Engulfs A Play 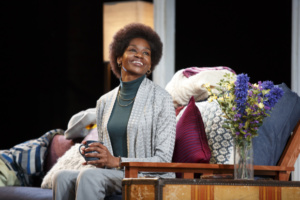 Now playing in rep is Mfoniso Udofia’s Sojourners and Her Portmanteau are two chapters in an nine-play cycle, following four generations of the Nigerian-American Ufot family. Her Portmanteau takes place 30 years after Sojourners, as Abasiama (Jenny Jules) deals with the abandonment of her oldest daughter. Her youngest daughter Adiagha (Chinasa Ogbuagu) has grown up with her and lives in New York City. Iniabasi (Adepero Oduye) has just arrived from Nigeria, having been in touch with her mother rarely and once with her sister. She is hoping to become part of her family and to bring her son. Having been told she was to live in Abasiama’s home in Massachusetts, she’s been demoted to bunking with Adiagha because Abasiama husband does not want her in his home. Iniabasi is bitter, resentful and prickly. The tension through a play is uncomfortable and if you did not see Sojourners first, you will miss a great deal. 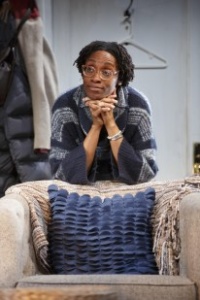 Again this is a cast who knows how to act with their finely crafted performances. Oduye’s pain is in her gaze, Ogbuagu who plays Abasiama in Sojourners is unrecognizable in Her Portmanteau, she is so different. This is one talented actress. Ms. Jules brings a new level to Abasiama. We see the tough choices and the pain she wears on her sleeve. 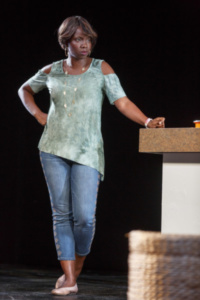 This time some of the choices Ms. Udofia makes are not so clear. One of the most confusing things is the discovery of Skype. How did they to know of this before? Iniabasi has used Facebook to see her family, yet it seems that they have not discovered her or her son. Why? Why has it taken so long? Why was this expected not to be difficult? How could Iniabasi not feel jealous, resentful and abandoned? Instead of exploring these issues Ms. Udofia has made Iniabasi into a complete harpy and we do not feel for her as much as we should. Her Portmanteau leaves too many issue’s unexplored.

Ed Sylvanus Iskandar directs on the same carousel set by James Sherwood. He brings out the best in his actors and lets us know each of their hardships and pain with subtle body language.

Udofia’s cycle needs to connect more of the dots while becoming complete within their own realm.

Suzanna BowlingMay 12, 2022
Read More
Scroll for more
Tap
Sojourners A Second Look At Fitting In
Jobs That Performers Do To Fund Themselves Before They Make It Big