“Heroes of the Fourth Turning” – Let the Conversation Begin 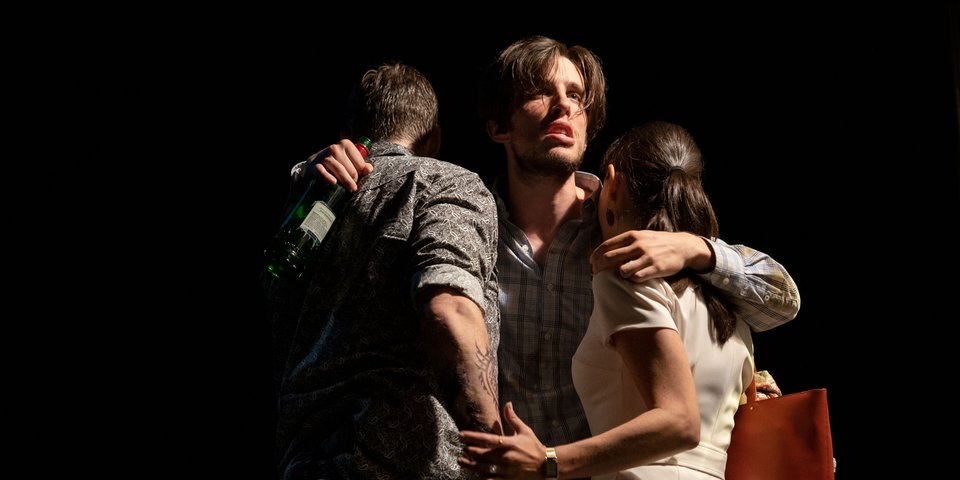 “Heroes of the Fourth Turning” – Let the Conversation Begin

“I am not asking you to emphasize with these characters. I’m representing their positions, with a goal of impartiality. You can do what you want with this access,” states Will Arbery on “Heroes of the Fourth Turning”.

There was a time in this country in which you were allowed to have a difference of opinion. That stopped when Obama was elected president. It became intolerable when Hillary didn’t win. In writing my review of Will Arbery’s brilliant “Heroes of the Fourth Turning”, I have slight trepidation to express my own views. I don’t believe in a black and white society, but shades of grey. Each side should be able to have a point of view, to be able to voice it and be heard, and, then, there should be conversation.

When I entered the theatre, I was extremely tired, but “Heroes of the Fourth Turning” woke me up, made me listen and brought me cheer that maybe, just maybe, that aforementioned conversation had been sparked here in this play.

In the backyard of his home in the mountains of Wyoming, Justin (Jeb Kreager) has just shot a deer. As he kills it, he has reservations and as the show goes on, he can’t erase the blood that is on his porch. Suddenly, a loud and disturbing noise erupts bringing out Emily (Julia McDermott), a woman crippled by Lyme’s disease. Emily is just as crippled on the inside  as she is on the outside. For that matter, that applies to everyone at Justin’s house. Justin is throwing a party to celebrate the promotion of a beloved professor, Gina Presson (Michele Pawk), to the school’s presidency. Unfortunately, Gina is so late that most of the party goers leave. The school promotes Catholic conservatism and the former students have come from other states to celebrate. Here’s where the audience is presented with the characters who are at different places with their beliefs. Enter Kevin (John Zdrojeski), drunk on whiskey and stuck in self-loathing, who longs for a girlfriend. His best friend in school was Teresa (Zoë Winters), well put together in her chic white jumpsuit and zealous in her conservative values. She has come because the professor was her personal favorite.

As the night continues, secrets are revealed and many an audience member may not be prepared to even hear the beliefs voiced on stage, mostly those spirited by Teresa. She states “Oh, don’t with the empathy. Liberals are empathy addicts. Empathy, empathy, empathy, empathy is empty.” She is anti-abortion and despises any shade of weakness, especially in men. She believes there’s a war coming. Could she be right? When her hero hears what she has to state, she proclaims “I feel like a disease.” Sounds like another play this season.

You will feel the characters’ struggles with loss of identity, the dichotomy of who they once were over what they have been taught, and at what positions they are at conflict with each other. These all reflect the disparate values of present-day society. There is no sympathy and no resolution for the suffering because a loud noise disrupts the discussion. Justin claims it’s his generator misfiring, but it sounds more like a representation of the fear of different sides closing in and no one being heard.

All five actors shine, but it is the fearless Winters who has the most strenuous role. She acts in an emboldened manner  knowing all along that the audience will hate her character just for speaking. Kreager’s Justin is the backbone. McDermott displays a tenderness masked by intense anger. Pawk is delightfully condescending. Zdrojeski is the epitome of despair.

Danya Taymor’s direction is haunting, keeping us mostly in the dark. Isabella Byrd’s lighting casts shadows, making it feel as if these old classmates are slowly fading away. Justin Ellington’s sound design is downright ear shattering.

Arbery’s language is poetic, lyrical, well-written and allows another side to be heard. Maybe if it is truly heard by the right audience, we can consider this a moment in which a light may be seen at the end of the tunnel to settle the hate and divide in our country.

Arbery’s play is invigorating and consider it added to my list of this season’s must sees.

Heroes of the Fourth Turning: Playwrights Horizons through November 17.