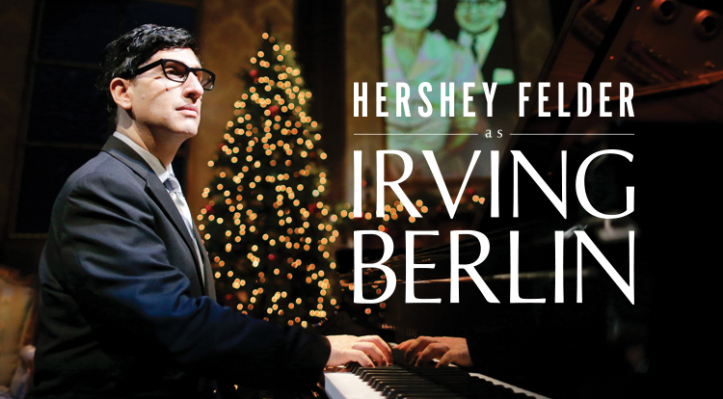 On a beautiful set draped in Upper East Side Manhattan Christmas elegance, Hershey Felder (Broadway’s George Gershwin Alone) saunters out into the living room of the great composer Irving Berlin (Holiday Inn) and speaks directly to us. It’s a dramatic opening set-up that is both charming and sweetly engaging. It speaks volumes to the stature of the man we are going to spend the next hour and half with, even though, to me, it doesn’t actually make all that much sense overall to the overall arch of the piece. It does though, based on historical fact, usher us into a strong partnership with the lead actor, a piano player that is overflowing with talent, who is also credited with writing the book for this ode to a legend, Hershey Felder As Irving Berlin.  It’s not the most creative of titles, but it is pretty darn obviously that the man has done his research, with stellar help from Maghan Maiya (credited with Historical & Biographical Research), painting a picture of one of the world’s finest composers and lyricist whom many consider to be one of the greatest songwriters in American history with warmth and clarity.

As directed simply and efficiently by Trevor Hay (Abe Lincoln’s Piano), the snow falls delicately on Christmas Eve.  Felder tells an empty wheelchair that they are “singing your songs” outside, celebrating the holiday season with one of his classic tunes.  They “don’t deserve them”, says the man who will become the great Irving Berlin, as they don’t know why they exist, or what they mean.  And with that nod to history and a subtle light change by lighting designer Richard Norwood (Trap Door Theatre’s Cookie Play), we dive into the immigrant story that is Berlin’s.

His story is warmly told, simply and with a slight braggart’s charm as Felder begins this compelling tale with a slice of Jewish history right out of Fiddler on the Roof(oddly enough, I was watching the film on Amazon Prime the night before). Berlin was anything but a man of tradition, but over the years, we discover his complexities. He fell in love and suffered loss. What would he do without his Dorothy, his Ellen, and his Statue of Liberty, as ideas seem to “make eyes at him” throughout his career. He wrote hundreds of songs, many as gifts to those he loved, with some of them becoming major hits. He was a legend before he turned thirty, feeling thankful and in love with a country that he fought for, and would call his home, writing an estimated 1,500 songs over a career that lasted over sixty years, including the scores for 20 original Broadway shows and 15 original Hollywood films, with his songs being nominated eight times for an Academy Award.

It’s not so much an in-depth look at the man, as it is mostly glowing, but what Felder gives us is more a star-struck biography of his music. “Stay in a song”, he says, “so as not to be alone”, a theme that hangs over the solitary wheelchair on stage. Felder is a talented piano player and a compelling although not powerful singer, one that truly believes that “when you sing, you know you’re alive”. The video projections of the performances of his songs from old Fred Astaire films, and lovely family portraits projected on the wall, along with historical landscapes create a montage that does honor to the man and his music, thanks to the elegant and powerful projection design by Brian McMullen (Fingerlakes Musical Theatre Festival’s Treasure Island), and sound by Erik Carstensen (Old Globe’s Allegiance). It emotionalizes the experience, drawing us into his sweet life in a way that the book as written and told rarely does. We “count our blessings”, as we go through the catalogue of hits, recognizing song after song, and smiling with the warm joy of remembrance.  Be prepared to utilize your own vocal cords throughout as Felder coaxes us to become members of a Irving Berlin caroling choir, but I resisted. Not because of any disconnection to the story or the moment, because it was a fascinating and lovely tale that was being told, but I will say, with no ego what so ever, that no one sitting around me wants to hear this voice of mine do damage to his lovely tunes. I didn’t quite get the Christmas theme that envelopes the stage, as his biggest hit, “White Christmas” is mentioned and discussed, but is by no means a motivator or drive for the whole evening. It is the originator of the drama, but after that initial holiday setup, Christmas never really returns at the end to make the feeling circular (but maybe I like a nice neat circular themed present with a tidy bow on top a little too much). The beauty and the elegance of the presentation as a whole is the Christmas centerpiece, worthy of a charming visit, even if the grumpy old man in the wheelchair is not so inviting.