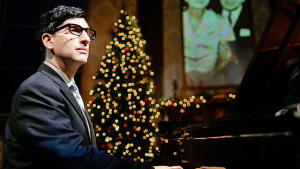 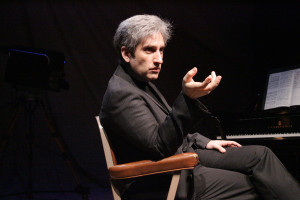 Felder is the President of Eighty-Eight Entertainment, a music-based production company, producing new performance works worldwide. He is also married to Kim Campbell, the former Prime Minister of Canada.

T2C: Why Irving Berlin, why now?

Hershey Felder: For years, producers and theatre owners pestered me to create the role of Irving Berlin. I didn’t think that I was right for the role, or that the music would be interesting enough to me being some kind of snobby classical guy. Then, the NY producer Eva Price insisted that I meet Ted Chapin (head of Rodgers and Hammerstein and the Berlin catalogue) who then introduced me to the three Berlin daughters and I was more than intrigued, I was fascinated. I began my research and my musical study. That’s when I realized that I was dealing with real genius. And any time is a good time for genius.

T2C: What are the similarities and differences between you and Irving Berlin?

Hershey Felder: He loved storytelling and music and so do I. He has immigrant blood, so do I (my family is all Polish and Hungarian, I am first generation North American). He was a committed worker. So am I. As for differences? He was a genius.

T2C: What is your favorite composition of Berlin’s?

Hershey Felder: That’s a rough one, but “Suppertime” is up there, along with “What’ll I Do.”

T2C: What is your favorite story?

Hershey Felder: The Berlin story in its entirety is quite a favorite of mine. The fact that this immigrant boy who came to this country with nothing, observed his surroundings and then translated those surroundings into poetry is very much a favorite story. His ability to make people laugh and cry within the context of one song is miraculous – and if one looks to his lyrics, one realizes they are all stories – and whatever the story may be the lyric “What’ll I do with just a photograph to tell my troubles to?” Is perhaps a bit of a favorite.

T2C: What do want audiences to take away from your performance of Berlin?

Hershey Felder: I tend not to try and answer that question. I only give what I believe is a faithful performance.

T2C: What other composers would you like to take on?

Hershey Felder: To date I have taken on Gershwin, Chopin, Beethoven, Bernstein, Liszt, Berlin, next up is Tchaikovsky and that begin in San Diego followed by various cities in 2017.

T2C: What is the hardest piano piece for you to play and why?

Hershey Felder: Every piece played well is hard to play. There is so much thinking and work always going on – that it’s never easy. But that difficulty is part of the fun.

T2C: You also compose and direct, where does your heart lay?

Hershey Felder: In whatever project I am doing at that very moment, whatever it is.

Hershey Felder: I’ve begun my Tchaikovsky studies. much much MUCH practice and information study. I am also working on several pieces for three artists that I will write and direct, and a new theatrical musical of my own. Busy busy BUSY.

T2C: What would you like audiences to know about you?

Hershey Felder: That I love art, that i love my work, and I am entirely devoted to it and to the people who help me make it happen.