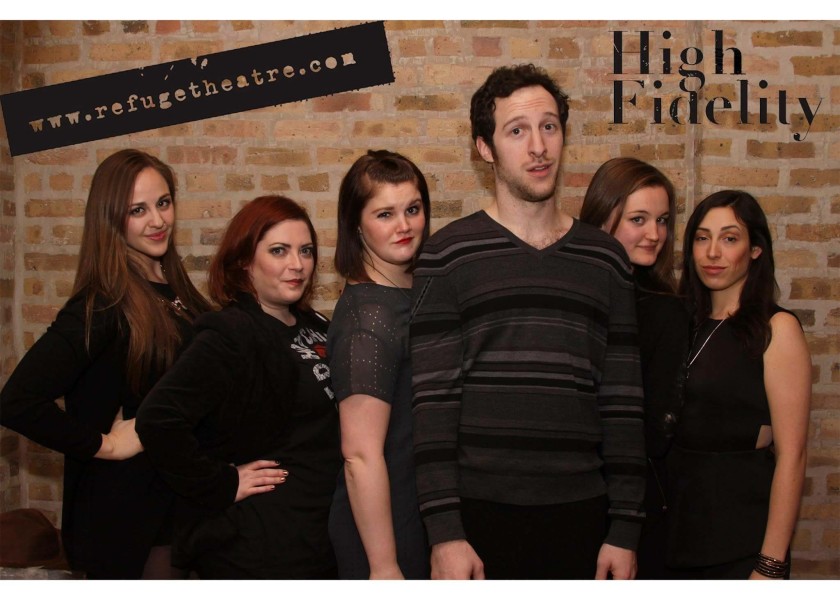 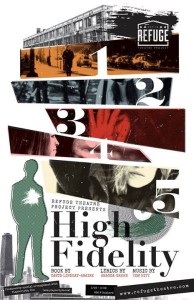 There is a charming new musical which has just opening that could otherwise be called The Hipster’s Guide to Modern Dating.  Arriving just in time for Valentine’s Day, this little rom-com treat is titled High Fidelity. Based on the 1995 novel by Nick Hornby, the 2000 John Cusack film directed by Stephen Frears, and the subsequently short lived, 2006 Broadway musical which played just two weeks, High Fidelity is currently staged in a pop-up performance space, crafted to emulate a record store, with it’s affable pop-rock score intact. Set in Chicago’s “too cool for school” Wicker Park neighborhood, the genuinely witty book written by David Lindsay-Abaire, toe-tapping music from Tom Kitt and cleaver lyrics by Amanda Green, with direction and choreography by Christopher Pazdernik, is better served in an intimate environment. This interpretation of High Fidleity isn’t perfect, but it is winning. 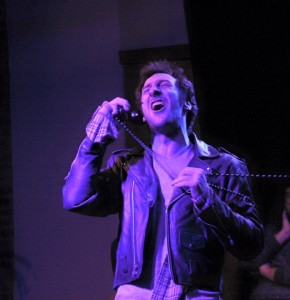 The story centers around Rob (the always appealing Max DeTogne) an owner of a vintage record shop, adjusting to his recent breakup with legal aid girlfriend, Laura (Liz Chidester). Surrounded both at home and work with a self-described collection of “autobiographical record albums,” I was a little surprised Rob was not better at expressing and processing his feelings about another failed relationship. After all, songs are essentially poems set to music, and his collection was hard to rival. “What came first, the music or the heartbreak?” he inquires, his genuinely poor understanding of women worn heartily on his sleeve. It doesn’t help that Rob has chosen to surround himself with losers, regardless of how loveable they prove to be. Barry (Nick Druzbanski) and Dick (Stephen Garrett) are employees at the “last real record store on earth” called, ironically enough, Championship Vinyl. They openly mock and scorn the musical tastes of their rapidly fleeting customer base.  I am not a fan of Celine Dion or John Tesh either, but this store does need to pay the light bill, and its employees’ salaries. Tough to do when you doggedly chase people out the door. These two give relationship advice no one in their right mind should be taking. Additionally aiding Rob in his adjustment to singledom, best friend Liz (Catlin Jackson) a spectacularly soulful singer and a matter-of-fact, take no prisoners, brazen, ball-buster.  She claims to not take sides, but is unremittingly unforgiving to unforgivable behavior. It would appear Rob is more to blame for his break up with Laura than he initially admitted. 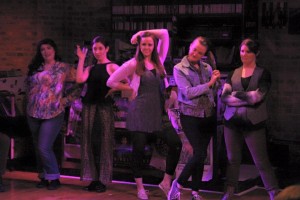 Not one to wait idly by, Laura has started dating a new man herself. The ponytail sporting, often shirtless guru, Ian (Tony Carter) who constantly name drops the fact he handled Kurt Cobain’s intervention. Kudos to his high profile client roster, however the creditability of his skill set as an interventionist is stretched as taught as the yoga positions he is frequently mounting on stage. Clearly designed as a gimmicky, new-aged schmuck, Carter also exhibits fine voice and grand comic timing.  To process his heart-break over his series of floundering relationships, Rob continually manifests his top five break up girlfriends in hopes to gain additional insight by this quintet of rejected muses. Included in the “Desert Island Top 5 Break-Ups” bunch, a former girlfriend who ended up coming out as a lesbian. When Rob claims she shattered his heart at an outdoor concert, she retorts, “It was the Indigo Girls, Rob!”  The strength of the ensemble, including Lizzie Schwarzrock, Will Wilhelm, Lewis Rawlinson, Britain Gebhardt and Kelly Baskin, raises any shortcomings in the narrative. As both TMPMITW, shortened from “The Most Pathetic Man In The World” and Bruce Springsteen, Noah Berman, steals any scene he is in. Amy Stricker, as performance artist “this girl has got to be a cutter” is a engaging delight, ingenuously mounted in the same vein of Alanis Morrissette and Maureen from RENT. The act two fantasy revenge sequence designed for a post-MTV generation with video influences by Guns & Roses, The Beastie Boys, and miscellaneous gangster rappers, must been witnessed live to truly appreciate the comedic cadence.  With song lyrics including “I’m ready to settle for you” and “I slept with someone who slept with Lyle Lovett,” Fidelity proves itself the ultimate slacker celebration. The hopeful “Nine Percent Chance” as amiable as it is pitiable. 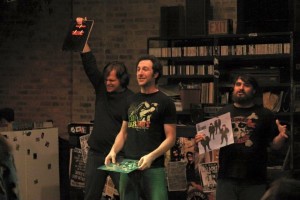 The loft space where the production unfolds nightly has been converted from the exposed brick walls of a day spa to a grungy record store, with albums and cassette tapes adorning the walls. From Cyndi Lauper and Pat Benatar to The Go-Go’s and the Clash, every essential 80’s anthem crooner was principally displayed.  An impressive feat for the design team who included set and props by Michelle Manni, costumes from Derrick Valenti, lighting designer Jessica Doyle and sound design from Rickard Schroeder. In the corner, the tight orchestra lead by Musical Director, John Cockerill, who brought this likable soundtrack to life. High Fidelity proved itself a small scale charmer, succeeding on the shoulders of its effusive cast. While not perfect date night fodder, it’s chief storyline is about a break up, there is much more than a “Nine Percent Chance” you will be squeezing the hand of your plus one by show’s promising ending. 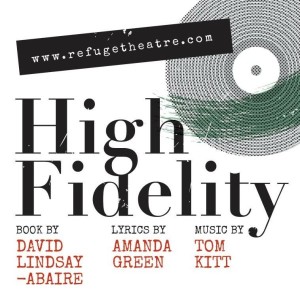