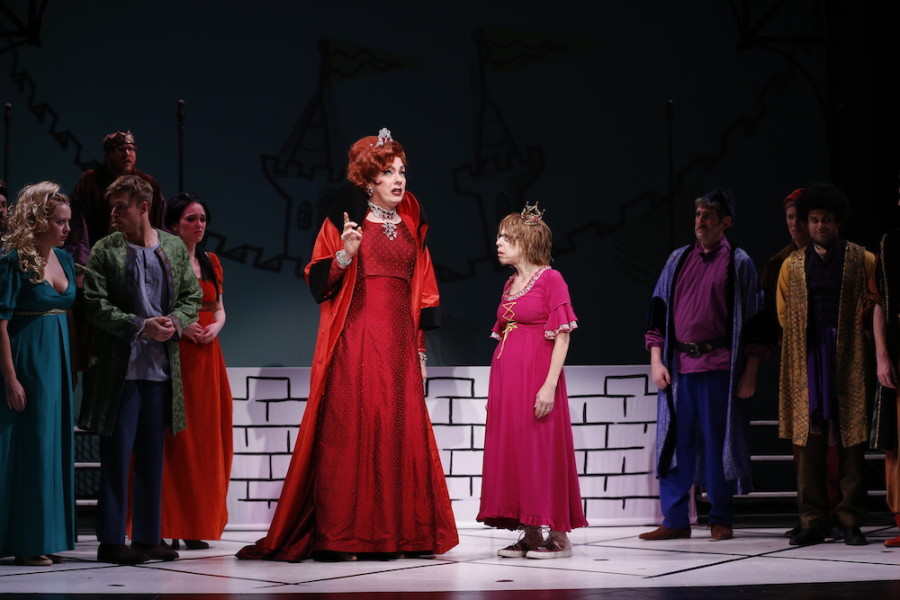 High On Once Upon a Mattress

High On Once Upon a Mattress 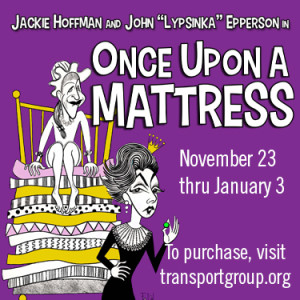 As the orchestra plays the opening strains from the Transport Group’s revival of Once Upon a Mattress, a smile will start to spread all over your face and will stay there for more than 2½ hours. Ah…an old fashion musical done well. What makes this production such a delight is the new orchestrations by Frank Galgano and Matt Castle. Featuring music by the late Mary Rodgers (daughter of Richard), with lyrics by Marshall Barer this score comes alive, as we learn the true story of “The Princess and the Pea.” With the Transport Group Theatre Company, it is more like the fractured fairy tale version with Jackie Hoffman, John “Lypsinka” Epperson and set illustrations by theatre caricaturist Ken Fallin. 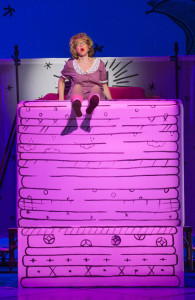 The show opens as a minstrel (the golden voiced Hunter Ryan Herdlicka) singing about how we don’t quite know the fairy tale of old, as The Jester (Cory Lingner) presents visuals (by Ken Fallin). He brings us back to where it all took place, a mythical kingdom in a desperate search for a suitable princess for Prince Dauntless (the vocally robust Jason SweetTooth Williams). Queen Aggravain (John “Lypsinka” Epperson), is determined that no one is good enough for her son. However, no one can marry until Dauntless does. This is a problem for Lady Larken (Jessica Fontana), who is pregnant by Sir Harry (Zak Resnick), so Harry goes in search of a princess. Enter 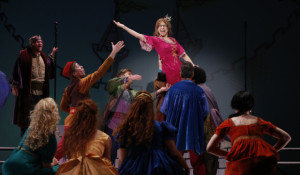 Winifred, Fred for short (Jackie Hoffman) anxious for a mate swims past the moat, over the castle walls, singing the most know of the songs from the show “Shy.” Dauntless and Fred immediately have a connection, which makes the Queen and her lackey The Wizard (the delightfully quirky Jay Rodgers) come up with a sensitivity test of a pea under-20-mattresses to sabotage the union. The lecherous mute King Sextimus (David Greenspan) along with the rest of the kingdom find out the plan and load the mattress’s with more than just a pea and the Kingdom is finally set right.

The chorography by Scott Rink, is lively but his number for Cory Lingner, “Very Soft Shoes” nearly steals the show.

As the lovers Ms. Fontana and Mr. Resnick sing with perfection.

Jackie Hoffman (Xanadu, The Addams Family, On the Town) makes this role her very own. This is not an easy task as it made the young Carol Burnett a break out star. Ms. Hoffman does vocal gymnastics and shows an amazing range. Her dead pan, I don’t care approach is hilarious as are her inserted one-liners. The visual contrast between Ms. Hoffman and John “Lypsinka” Epperson is funny enough, but these two play so well off each other it is delightful. Lypsinka makes his Queen a cross of all those famous Hollywood Diva’s, Channeling Joan Crawford, Bette Davis, Katharine Hepburn and Gloria Swanson. He can kill with just one glance or a tap on those red nails.

Jack Cummings III’s, love of this piece shows in his direction as he bring the audience along on his journey.

What has always been the week link is the book by Jay Thompson, Dean Fuller and Mr. Barer, but it is such a welcome treat to see musical theatre history re-done with such panache.

Once Upon a Mattress: Transport Group Theatre Company at the Abrons Arts Center 466 Grand St. until Jan. 3rd.

Suzanna BowlingMay 15, 2022
Read More
Scroll for more
Tap
2 Across A Train Ride To Romance
No Uncomfortable Mattresses at the Once Upon A Mattress After Party