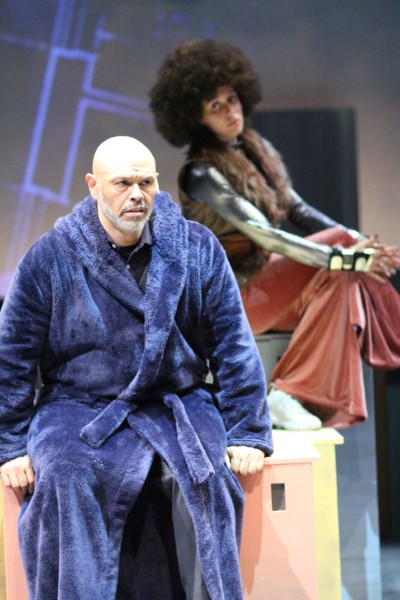 Charles Bernard Murray as Scrooge, Eryn Barnes as The Ghost of Christmas Past Photo by Jill Jones

For the second consecutive season, The Classical Theatre of Harlem, under the leadership of Producing Artistic Director Ty Jones, is presenting its delightful original holiday show, A Christmas Carol in Harlem.

This contemporary adaptation of the Charles Dickens classic by Shawn René Graham, with songs by Kahlil X Daniel (also the musical director) seems particularly relevant and timely, because it is being presented in the actual heart of Harlem, at the City College Center for the Arts’ Aaron Davis Hall at 135th and Convent.

In an age of greedy landlords, skyrocketing rents, and gentrification, nothing could be more appropriate than making Ebenezer Scrooge a selfish, stingy, real estate developer who has enriched himself at the expense of his community.  When this Scrooge (Charles Bernard Murray) suggests, as Dickens’ original character does, that letting poor people die of hunger or from lack of shelter would be a good way to “reduce the surplus population,” it remains a sorry sentiment which hasn’t changed in a hundred and fifty years.

This version still has all the major characters, and hits all the main emotional beats of the Dickens classic. But in a smart modern addition, Scrooge is challenged by a community organizer, Sierra Jones, played with dignity and fire by Ure Egbuho, who pleads with Scrooge to use his properties to support affordable housing and community facilities for the neighborhood.

Charles Bernard Murray plays Scrooge with a scrappy energy and a sitcom sensibility. It’s always a good question how and when to let Scrooge seem funny, which Murray, and this adaptation, try to do a lot.  The dark moodiness which sets the scene for the magical events of that night never quite got created for me. I felt that especially when Scrooge cracked wise with the Ghost of Christmas Past, of whom he should have been terrified.

Scrooge’s nephew, Bob Cratchit, played with warmth and charm by Jeffrey Rashad, still slaves away in Scrooge’s real estate business, with a cheerful tolerance of his uncle’s meanness.  Cratchit’s crutch-bound child is now a young girl, Tiny Timothea (sweet but bland Emery Jones), who is still wasting away from a disease that only Scrooge’s money can cure.  In another modern twist, Mrs. Cratchet, played with compelling earnestness by Kenzie Ross, offers to get a job to help pay their crippling medical bills.  It might have been a stronger choice to let this be a two income family already, who still can’t make ends meet.  That’s modern New York City!

As in the original story, Scrooge is taught the error of his ways by visits from the Ghosts of Christmas Past, Present and Future, as well as the ghost of his old partner, Jacob Marley.  All these roles were extremely well cast and well performed.

Steve Greenstein, with his booming voice and woeful countenance, really rattled the room as the miserable ghost of  Jacob Marley. Beautiful actress, dancer and gymnast, Eryn Barnes, was truly magical as the Ghost of Christmas Past, looking like Pam Grier in a 70’s action movie, and effortlessly popping off backwards walkovers like they were nothing.  Andrei Pierre was all glammed up in metallic gold and ready to party as the Ghost of Christmas Present.  But he also showed fine dramatic chops when he turned that party into a nightmare for Scrooge. Kahlil X Daniel, who is also the show’s musical director and composer, was a voiceless and faceless terror as the Ghost of Christmas Future.

In the dual role of Ebenezer’s sister, Fan, and Belle, the girl he loved and lost through his short sightedness, Gabrielle Djenné got the best written dramatic scene  in the show with Young Ebenezer, and acted it with powerful honesty.  She also beautifully sang the only really personal song in the show, called “Do You Remember”.  Her outstanding performance gave much needed emotional and dramatic weight to the production.

Two talented young boys, Reed Harris Butts and Kaden Jones, who played  Youngest Ebenezer and his friends, had a show stopping, Christmas-themed rap duet called “Wishlist,” which was another highlight of the evening.

Finally, Paula Galloway was a very funny, Carribean inflected shopkeeper, who also gleefully picked over the remains of Scrooge’s estate in the vision of Christmas Future.

The engaging songs, all composed by Mr. Daniel, let the company do some fine ensemble singing.  There was also a lot enthusiastic dancing by Kat Files, Sai Rodboon, Tracy Dunbar and Ashley Larosa, well choreographed by Tiffany Rea-Fisher.

But this show does not seem to know if it wants to be a play with music surrounding the characters, or a musical in which the songs reveal the characters.  Certainly, it was at its most compelling as the latter, when Ms. Djenné sang her big ballad.  But it seemed odd that a minor character should have such a personally revealing song, and Scrooge got to sing nothing about what he was going through.

Director Carl Cofield kept everything moving at a snappy pace.  But he also made some disappointing choices.  There was a moment in which Scrooge supposedly saw impoverished and miserable people on the street, who were then represented by the dancers in energetic movement which suggested anything but that.   I’d have been more convinced, and moved, if they had just shuffled across the stage wearing tattered clothing.    In fact, overall, I would have liked to see more of the real signs of homelessness and poverty be a part of this production concept.

There’s also a pivotal early scene about Scrooge’s alarm clock, which he can’t get to work at the store, which gets a lot of stage time.  As there is no chiming grandfather’s clock in this production, I wanted to hear its alarm go off unexpectedly to announce the arrival of a ghost, or to wake Scrooge on Christmas morning.  But the clock does absolutely nothing, and the set up never gets paid off by the director.

The costumes of Margaret Goldrainer, especially for the ghosts, are clever and evocative.  The minimal but effective set by Izmir Ikbal is a streetscape of miniature buildings made from moveable blocks with little windows, augmented by simple projected backgrounds by Maxwell Bowman.   Those projections are used at one point to present an interesting visual history of Harlem culture.  But they don’t add enough scenic detail during the main action of the show.   Overall, the lighting by Alan C. Edwards seems stark and simply functional.

So, even though this new production has dialogue which is sketchy at times, music and story which don’t fully integrate, and the overall feeling more of an individual talent showcase than a well knit production, the stage full of diverse and appealing performers make sure that everyone in the audience has a wonderful holiday time, regardless.

It’s worth the trip uptown to experience A Christmas Carol in Harlem in genuine New York Style.  Also, I hope the local residents come out to support this fine arts institution to which Mr. Jones has dedicated ten years, pro bono, in order to bring quality theater to his community.

So don’t be too Scrooge-like to buy a ticket before this show closes on December 21.