Hillary and Clinton an Unbiased Look at a Cultural Figure 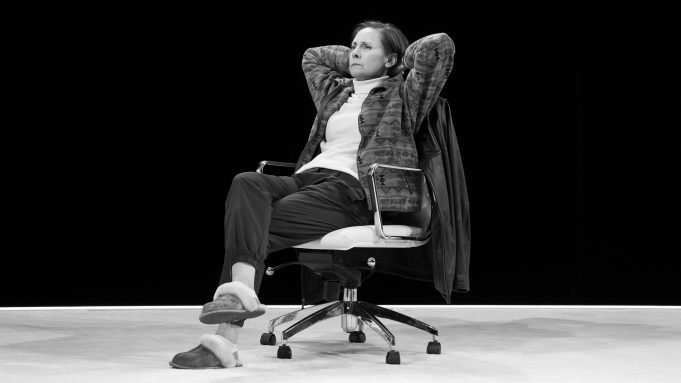 Hillary and Clinton an Unbiased Look at a Cultural Figure

“How about people grow the f**k up.” Hillary

Lucas Hnath’s new play Hillary and Clinton is a shockingly humanistic look at two people who seem distant and untouchable. Cutting away the sympathetic, emotional or psychological connection, Hnath strips away and lays things bare. It helps when Hillary is played by the brilliant Laurie Metcalf, who embodies this woman and does not seek to mimic.

Metcalf is alone on the stage as she breaks the fourth wall and tells us we are in an alternate universe that is very similar to this one, even right here on Earth in the 21st century.

“So me losing is a strategy,”

Now it is the winter of 2008, in Iowa and we are in a spare white hotel room just before the New Hampshire primary. Mrs. Clinton has not done well. Obama has won the last few primaries. She is in third-place and broke. Still confident she tells her campaign manager (Zak Orth) that she is in second in New Hampshire. Despite not wanting to call Bill (John Lithgow), as she kicked him off the campaign trail for being a distraction, she has. He is on her doorstep now hurt, but ready to help. Hillary asks Bill to fund her.

Bill funds her and she wins in New Hampshire, but we find it might have been because of Bill’s campaigning, something Hillary has not wanted. As when Hillary finds out she breaks down. Now she is willing to go in with Barack Obama (Peter Francis James), who is condescending and no longer wants her. He tells her where she got the money, ie: the Clinton Foundation is corrupt and warns her, it will come out. She tells him that for a rookie who doesn’t know how the Washington game, he won’t much done.

Metcalfe commands our attention, like Hillary and is charismatic. Lithgow plays Bill as a wounded, petulant, narcissistic child. Together with Metcalf you believe these performances and this dysfunctional relationship.

Joe Mantello allows us to see these two in a real light.

According to Hillary and Clinton, Bill never wanted her to be President. Seems to me that it is consistent with what Hillary has said all along. I think the problem with Hillary, is that she never takes the blame, she always blames somebody else. Sometimes you have to say I am sorry and grow the f**k up.

Hnath’ play allows you to make your own discussion. He does not try to manipulate you into an opinion. For that reason alone, along with the wonderful performances, makes this a play to see.