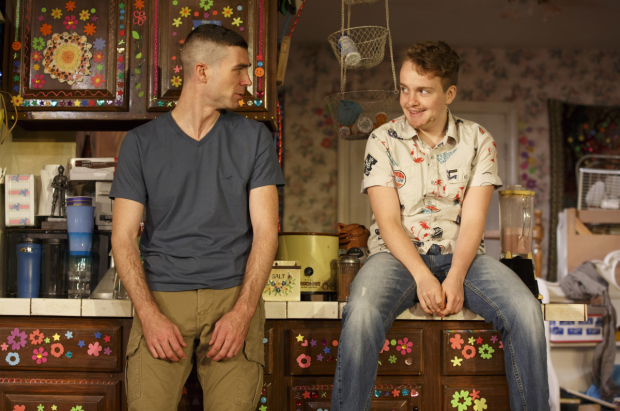 Hir or How Hate Begets Hate

Hir or How Hate Begets Hate 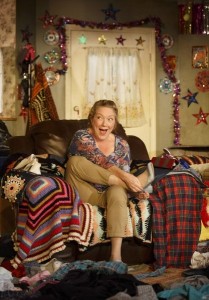 I thought my family was dysfunctional, but after seeing Hir at Playwright’s Horizon I would really hate to meet Taylor Mac’s real life family.

The play begins as Isaac (Cameron Scoggins), enters his family home after three years at war. What awaits him is a home that looks as if a tornado has entered the inside and run amuck. Set designer David Zinn, must have had a ball. We are left wonder if this is a family moving in or out? His father Arnold (Daniel Oreskes) is in full clown make-up with a dress on. His mother Paige (the exquisite Kristine Nielsen), tells her son, “He’s not all there, It’s O.K. He doesn’t even know.” She then blends a shake full of pills including estrogen and gives it to Arnold and tells him to drink, stating that he had a stroke and can barely speak. The air condition is at full blast as Arnold is freezing. When Isaac tries to turn it off and take the make-up off his father, his mother turns on him. Isaac’s bedroom is no longer his room, his bed is the coach and his father’s a cardboard box. If all this was not bad enough his tomboyish sister, Maxine, is transgendering. Max (Tom Phelan) has made up his own language of Ze for “he” or “she” and Hir pronounced “here” for “his” and “her.”

All is not as it seems; Isaac was dishonorably released by the Mortuary Affairs department where he picked up dead body parts and has become a drug addict. Arnold regularly beat his family and the house hides the remnants. He had an affair where the woman tortured Paige. When he lost his plumbing job after 33 years to a Chinese-American woman, he raped Paige and had a stroke and this is her revenge.

Niegel Smith directs this horrific tale like a rollercoaster of the mad and insane. Isaac is constantly throwing up, as do we as we as we watch this American Horror story that is all too real. Paige’s treatment of Arnold is appalling, but he deserves all of this and more. The problem is when hate begets hate, all lose.

This cast is terrific, but it is Ms. Nielsen who is a tour de force of insanity that grounds this play. This performance is award winning, riveting and savage.

This is a hard play to watch, but it is hypnotic in it’s brutality.

“Don’t you pity him. We will not rewrite his history with pity.”