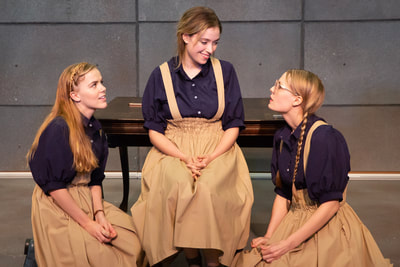 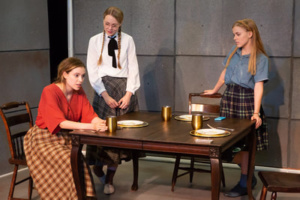 Michelle Kholos Brooks new drama, Hitler’s Tasters, at the Irt Theatre presented by New Light Theatre project, is based on a true story of a group of young German women who were forced to live in Adolf Hitler’s World War II bunker. They were there to taste his food to ensure it wasn’t poisoned. Three times a day, the “tasters” faced the possibility that they might not live through another meal.

The show would have worked better if the girls didn’t have cell phones and weren’t so obsessed with capturing the moments with selfies. This along with the contemporary speech, no accents, and contemporary music, took the show out of the time period and the devastating ordeal. When the superficial gimmicks faded away, this play was powerful and touching. Though the intent I am sure was to connect the girls of today to the past, they do not have the same worries, concerns, restraints, and terror thrust at them like dogs. 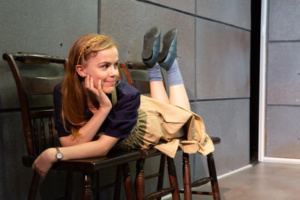 Food in Nazi Germany during World War II was in short supply. Hilde (MaryKathryn Kopp) has gotten this position because her “vater” is an important officer. She is the dominant force of the girls and is mean-spited. Leisel (Hallie Griffin) tries to keep the peace as Hilde attacks the vulnerable Anna (Kaitlin Paige Longoria), whose teasing about being a jew from association may be right.

These teens are bored, and as they wait for their next meal or the time allotted to see if they have been poisoned they giggle, gossip, tease, talk about sex, dance, and dream. They are obsessed with American movie stars, the Fuehrer’s dog Blondi, the guards, and the Fuehrer himself. Their day is broken up by the signal that they get to live another meal. They brush off their fears with patriotism, how death will be, and the above-mentioned selfies. 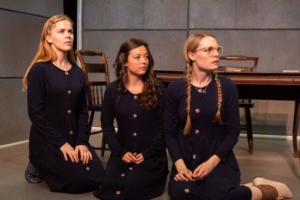 When Anna vanishes and Margot (Hannah Mae Sturges) replaces her, is it because she might be Jewish or was she poisoned? We never learn the answer to that. When Hilde is late, the girls panic, but she is pushed back into the cell, telling the girls that the Fuehrer is to visit that day. Instead, another girl is poisoned, and another takes her place. They are but disposable objects.

The actresses all have moments with MaryKathryn Kopp and Hannah Mae Sturges standing out for their consistency and layered performances. Hallie Griffin starts off week, but when she describes death as told to her by the doctor who is her next-door neighbor, she comes alive. Kaitlin Paige Longoria actually has the most difficult role, as her character makes the least amount of sense. She is raped by a soldier, yet lusts after one of the soldier’s in the barracks. She knows to talk about being friends with a Jew means being beaten, ostracized, or death, yet she talks freely about this. It becomes even more concussing when it has been hinted at that she looks Jewish.

Director Sarah Norris stages the play ritualizing the meals in an almost robotic trance, the changing of clothes to signal the end of a day and the irritating selfie moments. Christina Tang’s stylized lighting and costume design by Ashleigh Poeteat work. The completely out-of-period, contemporary music makes no sense. However, the dance choreography to “Bitch I’m Madonna,” was fun if not out of place with the time frame. During this time, there were such things as Nazi Bride Camps; these girls would have been repressed.

This play is obviously based on Margot Wölk’s account, but in the play, we do not even meet her until a little over half of the way in. We learn basically nothing of her struggles. Adolf Hitler had 15 female food tasters at his headquarters during World War II, but little was known about them until 2014 when Ms. Wolk broke her silence after 70 years.

The story of Hitler’s tasters could have been a powerful and relevant play, especially with a woman playwright, director, and all female cast. I hope they work out the kinks and bring this interesting tale back into focus.