Hold On to Me Darling or Even Stars Get The Blues

Hold On to Me Darling or Even Stars Get The Blues

Kenneth Lonergan’s (This is Our Youth) new play, Hold On to Me Darling, at the Atlantic Stage Co., comes in at 2 hours and 45 minutes. Though it talks a lot, at least its verbiage is insightful and poignant. 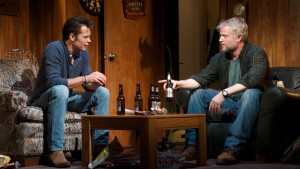 The show involves the death of Strings McCrane (Film actor, Timothy Olyphant), mother. This mega star is selfish, self-contradicting, self-dramatizing, self-indulgent and highly needy. It doesn’t help that women fall into his embrace at a snap of his fingers; after all he is the third-biggest crossover star in the history of country music. With his mother’s death Strings has become disillusioned with his own life. At 39 years of age, he is facing a midlife crisis. His manager aka best friend Jimmy(Keith Nobbs) has taken the brunt of this stars tantrums. In a hotel room Strings meets married massage therapist Nancy (Jenn Lyon). She knows how to play him and is a carnivorous flower who knows how to get what she wants.

Strings has abandons his film, setting the company back $250,0000 a day and heads to Tennessee to his mothers funeral. Staying with his half brother, Duke (C. J. Wilson) he longs for a simpler life. At the funeral his distant cousin Essie (Adelaide Clemens), wins him over with her sweetness and morality. Strings decides then and there to go into partnership with his brother and live a simpler life. He buys Ernie’s Feed Store and agrees to be sued for over 4 million, for breach of contracts. In the end he finally meets the father (Jonathan Hogan) who abandoned him when he was eight and has a chance to morn his intense loneliness within himself.

The cast is first rate. Mr. Nobbs, keeps the comedy real and sardonic, as he idolizes his boss of 12 years. Mr. Wilson shows the other side of a man whose intelligence, but lack of drive has left him stuck with pride. Ms Clemens and Ms. Lyon are the perfect opposites whose blonde hair may be alike but their souls are vastly different. Mr. Hogan adds the heart. Mr. Olyphant is indeed a find, with his strapping good looks that melt into a confused, weak and utterly lonely human being, no matter how many people adore him. He shows the pain, so hidden of a man where everybody wants something from him, but in reality he truly has nothing to give.

Director Neil Pepe gets layered performances from the cast. He keeps the humor, while allowing Mr Lonergan’s words to tell us off. The revolving set by Walt Spangler is well done and allows us to know exactly where we are.

Hold On to Me Darling, is a sneaky little play that lets you know just where our real values should be.