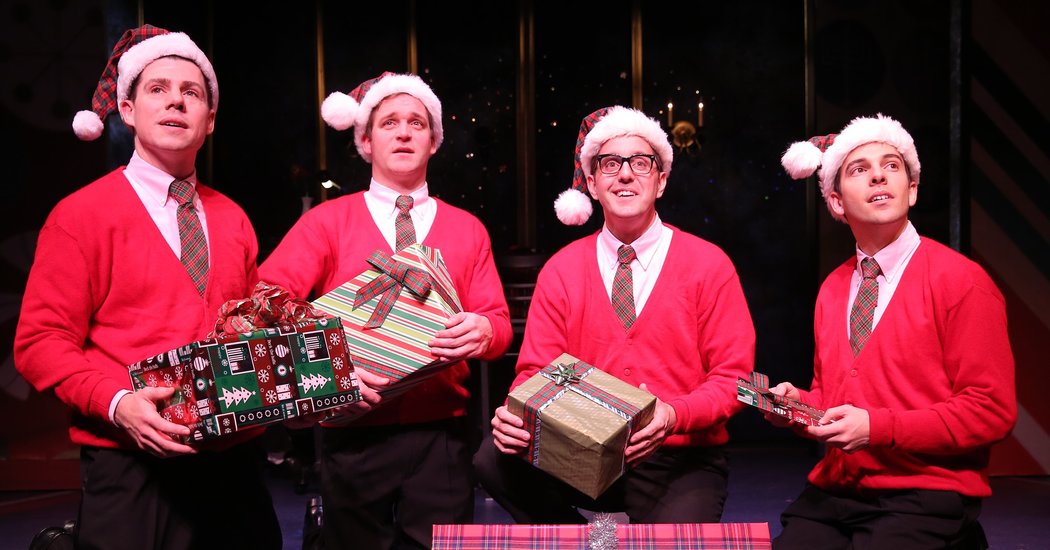 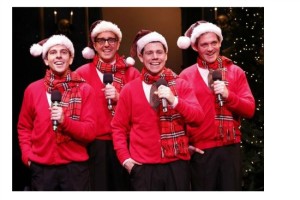 Deck the Halls with the 50’s and the fabulous Plaids at the York Theater, in their New York premiere. Having missed the original Forever Plaid, I did not know the concept. In Plaid Tidings we learn how these four high-school chums’ who dreamed of recording an album, but their dreams were cut short when a bus filled with Catholic schoolgirls on their way to see the Beatles’ on The Ed Sullivan Show hit their car. Ironically the girls lived. 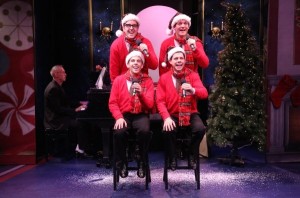 Now the universe has decided in Forever Plaid to return the group Frankie (Bradley Beahen), Sparky (Jose Luaces), Jinx (Ciaran McCarthy) and Smudge (John-Michael Zuerlein) to see there childhood dream come true, but first they have to remember it.

The first half is mostly 50’s standards such as “Life Could Be a Dream,” “Fever” Mambo Italiano” and “Besame Mucho.” During this throw back the spirit of the holidays possesses the group. With the help of their guardian angel Rosemary Clooney, they remember how they had wanted to do a Christmas Show ala Perry Como. From there the second act is that show. “Carol of the Bells,” “The Christmas Song” “I’ll Be Home for Christmas,” “O Little Town of Bethlehem,” “Let It Snow” and more will get you into the holiday spirit unless you are a Grinch. Childhood memories will be stirred with Perry Como’s black-and-white appearance for those who were alive to remember that show.

The boys are all top notch with major kudos going to Ciaran McCarthy. Stuart Ross does a triple threat job by writing, directing and choreographing this satisfying entertainment. James Followell onstage piano playing and musical directing is excellent. As is the vocal arrangements by James Raitt, Brad Ellis, Raymond Berg and David Snyder. Debra Stein keeps us in the era with her plaid ensembles that are perfection as they clash with just the right amount of style.

Plaid Tidings will have you remembering your Christmas wishes and things of the past in a heartfelt way.