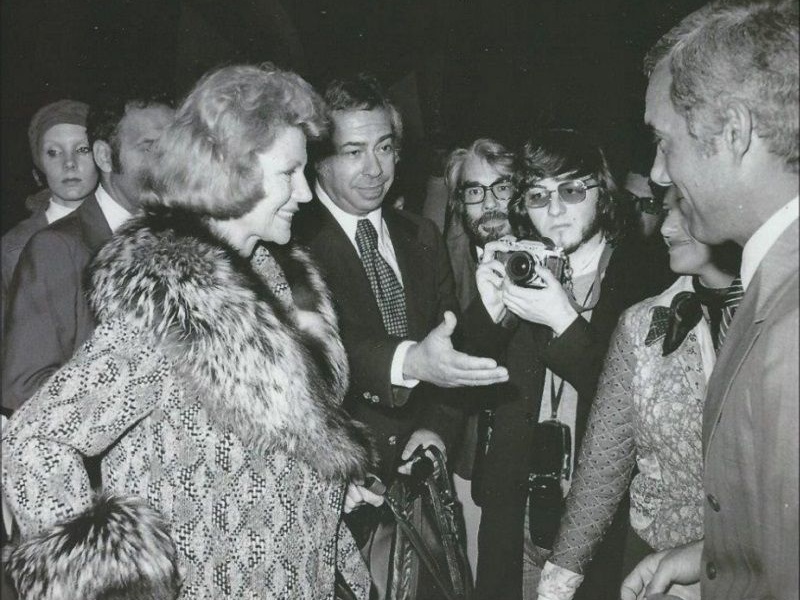 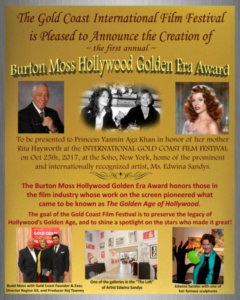 However, Budd is perhaps most famous for his close relationship with iconic Rita Hayworth, which he details in his second memoir HOLLYWOOD. It is a fitting and honorable recognition that the Gold Coast International Film Festival should name a prestigious and important award for Budd, to honor the greats who helped shape the Golden Age of Hollywood, and it is especially touching and poignant that the first presentation be made to Rita Hayworth’s daughter, the Princess Yasmin Aga Khan, in recognition of her amazing mother.

T2C had a chance to talk to Mr. Moss to gain some insight into his glamorous and creative world.

T2C: With everything that is going on right now with Harvey Weinstein, would you say that this is isolated or just the tip of the ice burg?

T2C: How did you meet Rita Hayworth? 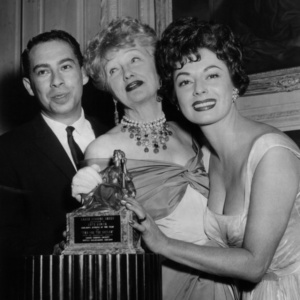 Ruth Roman (right), recipient of the 1959 Sarah Siddons Award for best actress of the year, poses with her husband Budd Burton Moss and Hedda Hopper

Budd Burton Moss: I first saw Rita when I was eleven years old, when I saw the “Blood and Sand”. I was with my dad, Tony Quinn, John Carradine and Linda Darnell. When I was seventeen I worked as a bus boy during the summer at the commissary at Fox, she came in with Daryl Zanuck. I wanted to say hi and that I was a fan since “Blood and Sand”. I must have been daydreaming because the head waiter threw a towel at me and said ‘Budd, wake up and go clean off table #12. Finally in 1960, I had become an agent and I was with my first wife, actress Ruth Roman at the Polo Lounge with Bing Crosby and we finally met. I told her how much of a fan I was and that I was now an agent. I told her I wanted to find her a movie one day. She was very kind as said, “I hope you can and if you do call my lawyer, Leonard Monroe when you do.” I actually knew him, so seven years later, this happened.

T2C: What is your favorite memory of Rita? 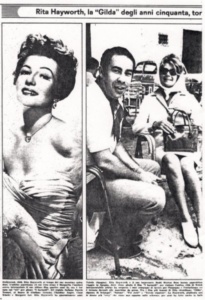 Rita and Budd haring her birthday in Toledo, Spain while filming ‘Ll Bastardi’

Budd Burton Moss: The four weeks we spent together in Madrid and Rome. In 1967 I had put together a deal for Rita to star in “ll bastardi” with Klaus Kinsky playing one of her two son who where robbers. It was a dream come true being with her on location.

T2C: How has Alzheimers affected your life?

Budd Burton Moss: In 1967 few people knew the word Alzheimer’s or about this terrible disease. It saddened me deeply being with her in 1976 in London, Buenos Aires and Rio de Janeiro. Watching her have those breakdowns and fits was heartbreaking.

T2C: How does it make you feel that Gold Coast International Film Festival should name a prestigious award after you?

Budd Burton Moss: I am touched and honored with this award and very proud. I come from a long line of people who have worked in the industry and I am proud of carrying on that legacy. Regina Keller Gil the founder and the executive director of  Gold Coast International Film Festival, created the concept of the Burton Moss Hollywood Golden Era Award that Princess Yasmin Aga Khan will accept for her mother Rita Hayworth as the first recepiant of this award. A very special and unique piece of art has been created by the british artist Edwina Sandys, the granddaughter of Winston Churchill.

T2C: Your second book Hollywood is about your relationship with Rita Hayworth. What was your first book about?

Budd Burton Moss: My first book “…and all i got was 10%” Tells how I was born and raised in Hollywood, up to my early days as an agent at General Artist Corp., working with unknown actors like Martin Landau, Carroll O’Conner, Cliff Robertson, Sidney Poitier, Dina Merrill, Sally Kellerman, Elizabeth Montgomery, Barbara Eden and more.

T2C: what advice would you give to young actors and actress entering Hollywood now?

Budd Burton Moss: Don’t, it has become such a competitive industry. The big agency’s such as ICM, CAA, control the business today, so if you are not with the top tier your not working. You must be prepared to audition at the drop of the hat. There are at least 200 actors for one role. Even star guest shots have lines that are beyond impossibly long.

T2C: Whose career are you the proudest of nurturing? 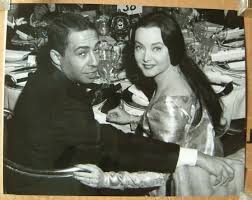 Budd Burton Moss: Ruth Roman ( I was married to her 1956-1963), Tom Bosley, Carrie Snodgress (died too young), Carolyn Jones (was engaged to her 1963-1968), John James, Sally Kellerman ( I got her “Mash”), Diane Cannon and Miles O’Keeffe. I helped get Carrie, Sally and Dyan their Oscar nominations.

T2C: How different is today’s Hollywood from yesteryear?

Budd Burton Moss: The golden years of Hollywood were the most memorable as there was a real glitter to our industry. Little did Gable, Hepburn, Tracy, or Paul Muni realize that some 50 to 60 year ago that they would go from contract players earning $500.00 a week to stars who would leave such a major imprint on our film history today.

I once sent Sir Laurence Olivier a fan letter telling him how magnificent his 1939 film “Wuthering Heights” was. Even now that film is a classic.  Sir Olivier sent me a note in 1971, which said; “Dear Mr. Moss, it was most kind of you to write. Of course it always gives one a “little purr “ to be told that past performances are still liked. Thank you so much. Yours sincerely, (hand signature). “A little purr”. Would the Tom Cruise’s or Angelina Jolie’s think of writing that? I think not!

Budd Burton Moss: I am now the keeper of the keys at the Gold Coast International Film Festival and I look forward to bringing them a few of those Hollywood legends that I have known, that have been forgotten and sit and wait for that phone to ring for possible one more film to do. To afford them the luxury to be in that spotlight for just another few moments and to remember who they were and what they gave to the Hollywood golden years, is a gift.