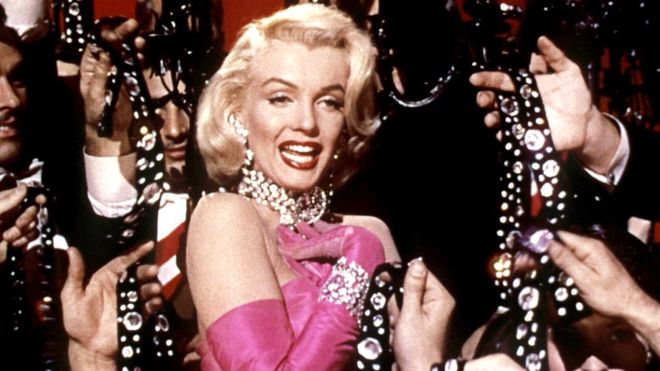 Julien’s Auctions, the world-record breaking auction house, announced Property From The Life And Career Of Marilyn Monroe featuring some of the star’s film costumes and clothing worn in her most iconic roles and dazzling, star-making moments will happen on Day One of Julien’s Auctions’Legendary Women Of Hollywood auction extravaganza on Friday, November 1 and Saturday, November 2, 2019 at The Standard Oil Building in Beverly Hills and live online at juliensauctions.com.

The top highlights of the auction event will be three costumes worn in the Hollywood screen legend’s biggest films – Gentlemen Prefer Blondes, There’s No Business Like Show Business and River of No Return – as well as her signature style black cocktail dress likely worn to the 1958 press conference for her blockbuster film, Some Like It Hot. This glamourous collection of 115 items also includes a wide array of artifacts from her personal life and will all be sold at no reserve.

It was also announced that these four outfits will be on view in London at The May Fair Hotel for a month from September 18 to October 21 before making its way to the U.S. for its exhibition and auction in Beverly Hills.

In Gentlemen Prefer Blondes (20th Century Fox) – the 1953 musical comedy movie that would catapult Monroe to super stardom and iconic status as Hollywood sex symbol – Monroe plays Lorelei Lee, a showgirl who travels to Paris while pursued by a hired detective as well as other wishful paramours and admirers. In the spectacular opening of the film where she and co- star Jane Russell (as “Dorothy Shaw” wearing an identical outfit) sing, “Two Little Girls from Little Rock,” Monroe wears this stunning floor length, red silk, long sleeved sequined dress (photo right). The iconic costume together with the matching dramatic red headdress is estimated at $60,000-$80,000.

Another unforgettable costume on offer is this extravagant three-piece ensemble designed by master couturier, William Travilla, from Irving Berlin’s There’s No Business Like Show Business (20th Century Fox, 1954), estimated at $60,000-$80,000. The show stopping piece(photo left) was worn by the star who plays “Vicky Parker” during the saucy “Heat Wave” song and dance number. It consists of a daring black silk bandeau top adorned with sequins and dangly bead-balls and a hot pink and black silk sequined scarf that drapes over the left shoulder; a black floral print, decorated floor-length skirt lined with six layers of hot pink silk ruffles, accompanied by a black silk bikini-style bottom brief; and a classic, over-sized straw hat painted white with added orange silk flowers. The racy costume was met with controversy, including husband Joe DiMaggio, who allegedly refused to be photographed with his wife wearing the costume on the set. A design sketch of the costume in gouache and pencil signed by Travilla is also on offer (estimate $3,000-$5,000).

A bright yellow silk, floor-length period gown worn by Monroe as “Kay Weston” in the final scene of the 1954 drama, River of No Return(20th Century Fox), co-starring Robert Mitchum, (photo right) where she sings the theme song of the film’s same title comes to auction. This beautiful ensemble, estimated at $60,000-$80,000, was originally designed by costumier Helen Rose for Betty Grable in the 1943 Fox film Coney Island. A decade later, red beading and a back bow was added by William Travilla for Monroe’s use, as part of this lineage of Hollywood history. Debbie Reynolds bought this gown directly from Twentieth Century Fox during their “pre-sale” prior to their 1971 auction which came on the heels of the bigger 1970 MGM auction, where Reynolds famously bought a huge amount of Golden Era Hollywood costumes.

Another signature look of Monroe’s includes this black silk crepe, knee-length, short capped sleeved Henri Bendel cocktail dress (photo left)with a plunging V neck and back, appearing to be the same dress she wore at the July 1958 press conference for her film, Some Like It Hot (estimate: $20,000 – $40,000).

Other auction highlights include: a black silk jersey fabric with a gold and black “lace” print bathing suit worn by Monroe in the 1951 film, Let’s Make It Legal (20th Century Fox) (estimate: $10,000 – $20,000); an Italian-style carved wood ornate corner chair used by the star in her final photo shoot in July 1962 with Life magazine (estimate: $8,000 – $10,000); a mint green jersey silk Emilio Pucci top and skirt ensemble (estimate: $6,000 – $8,000); plus, numerous personal artifacts including a handwritten letter circa 1955 to the men of the Thule Air Base in Greenland; a check written out to Mr. M. Chekhov, her acting coach for “$60;” handwritten personal notes and more will be for offer.

“This collection of Marilyn Monroe’s most iconic costumes that were worn by the screen legend in some of her most acclaimed and incandescent film performances will excite not only her millions of fans, but curators and collectors who are interested in owning and preserving these museum worthy pieces of the Golden Age of Hollywood history and fashion,” Martin Nolan, Executive Director of Julien’s Auctions said. “Julien’s Auctions is also pleased to announce that we are offering all of these items to be sold at no reserve.”