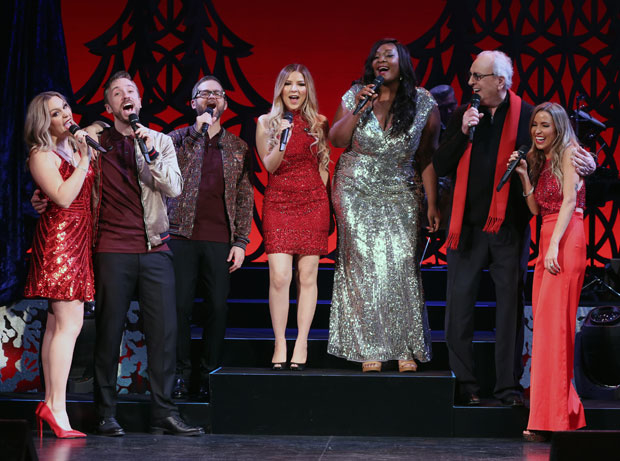 Home For The Holidays Amateur Night on Broadway

Home For The Holidays Amateur Night on Broadway 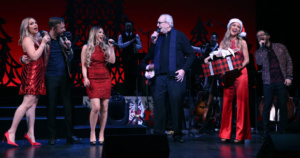 Cast of Home For The Holidays

From the moment I entered the August Wilson Theatre and saw the curtain, that looked like a hand sewn sheet, with a blurry projection, I had a inkling that I was in trouble. Chart Breakers Live! and Michael J. Guccione, should be banned from live theatre and disassociated from anything Broadway. This cheesy amateurish nightmare called Home For The Holidays Live On Broadway, belongs in the basement of a church.

The company announce their cast, like they were stars, which they are not! 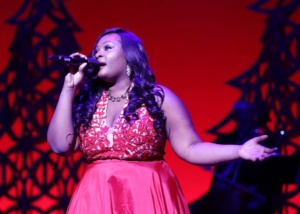 Candice Glover, won the 12th season of “American Idol” and had to auditioned three times before being cast for the live shows. Simon Cowell said that he could not see Glover being anything more than a lounge singer and he was right, Ms. Glover has NO personality. She also won 4 years ago. Though she has a pleasant voice with a melodic belt, she is not Broadway caliber. 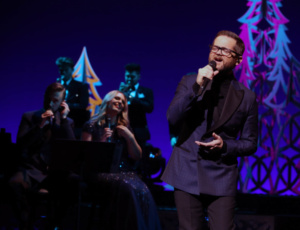 Josh Kaufman, won the 6th season of “The Voice”, which was again 4 years ago. At age 38 he became the oldest winner in the series history, which makes him 42. Mr. Kaufman is so into himself, that he is hard to watch. He has some smooth vocals, but would rather play vocal gymnastics than hit the note and he does not always rate over a 6, let alone a 10. 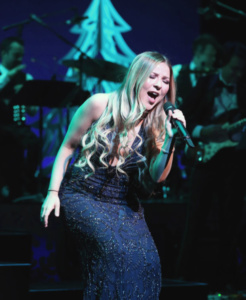 The worst of the three is Bianca Ryan, who won “America’s Got Talent” at age 11, she is now 23 and her voice is like nails on a chalkboard. This Mariah Carey wanna be, is flat, breathy and has a serious register break.

Hosting the show is Kaitlyn Bristowe, one of two bachelorettes on season 11 of The Bachelorette, whose inane drivel isn’t even credited.

Peter and Evynne Hollens, are a married youtube sensation, but why is beyond me, because there is nothing sensational about them.

Only veteran character actor Danny Aiello comes across as professional.

Even the look of the show is God forsaken. All the costumes styled by James Brown lll and provided by Sherri Hill, Stephen f, Nina Shoes and Noah Waxman, look like they come off the bargain basement rack at a tacky bridal store. The first set is in steel blue, then an obnoxious red and then in silver and gold. The women look stuffed into the garments or they are swimming in them and nobody looks coherent, professional or in the same production. If these were my stylists, I would seriously be suing, as each outfit was more unappealing than the last. Danny Aiello’s costume change, consists of different colored scarves. There is no hair or make-up stylist and it shows, especially on Ms. Hollens, whose stringy hair needs to be curled or put up.

The set has white plastic cut out Christmas trees with horrendous rainbow, canary yellow, blurry red and off white lighting. Again no credit is given for set, but the blinding lighting was done by Jason Kantrowitz.

The orchestrations are plebeian, with a rather fabulous eight-piece band, but the arrangements are so flat that nothing shines. We get the tried and true standard carols that at first sound overly religious due to the running rifts that makes the singers sound like they do not know where the note is. “O Come All Ye Faithful,” “Silver Bells,” “The First Noel”,”Have Yourself a Merry Little Christmas”, “All I Want for Christmas is You”, “Christmas (Baby Please Come Home)” and Mr. Hollens bland original tune “Why Couldn’t It Be Christmas Every Day?” make up the set with an overly long non modulated “Joy to the World,” as a finish.

Jonathan Tessero is given credit as the creative and music director, and it seems as if he never showed up or is deaf and blind.

Broadway is bursting at the seams with talent and instead we get forth class reality show winners? People are being coned out of their money, thinking this is Broadway and it is not!!!!!!!

The only bright moment of this whole show, was when the adorable blonde sax player was given seconds to shine.

Home For The Holidays Live On Broadway: August Wilson Theatre, 245 West 52nd St. until Dec 30th or my guess is even shorter.

Suzanna BowlingJune 22, 2022
Read More
Scroll for more
Tap
Countdown To Christmas: Angels We Have Heard on High
Broadway in Rehearsal For the The Macy’s Thanksgiving Day Parade