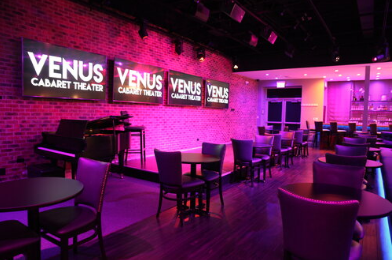 As our live theaters lumber back to life, much attention has been paid to the larger venues. But at the other end of the spectrum, smaller theaters are also struggling to get back to business. The most intimate performance space of them all, the cabaret theater, is also resurfacing, giving performers a place once again to be at their most personal with their audiences.

In NYC cabaret, we have Don’t Tell Mama’s. In, L.A., it has long been the Gardenia Club. In my home town of Chicago, Davenport’s Piano Bar and Cabaret is planning to re-open. But there is a new kid in town about to add to the cabaret fun: The Venus Cabaret at the Mercury Theater.

The 280 seat Mercury Theater is a north side Chicago gem, located in

Chicago’s trendy Lakeview community, not far from Wrigley Field. It started life as a silent movie nickelodeon in 1912 before being turned into the for-profit Mercury Theater in 1994 by producer Michael Cullen.  It was purchased in 2010 by producer-director Walter Stearns and his husband/musical director, Eugene Dizon, now co-Executive Producers of the complex.  Prior to that, they had built Chicago’s fine not-for-profit, Porchlight Music Theatre, from a small non-union start up into a major local institution.

The Mercury closed during the pandemic, and plans were being made for its sale. With Chicago losing another for profit theater complex, the Royal George Theater, to condo developers, this would have dealt another big blow to the Chicago commercial theater scene. But the dedication and hard work of the Mercury Theater team has allowed them to re-open as well.

Their first step forward was the appointment of a new, African-American Artistic Director, Christopher Chase Carter, for the theater. Now Carter has brought on one of Chicago’s most iconic cabaret  performers, Honey West, as the official Cabaret Director, to helm the new Venus Cabaret, in the adjacent repurposed restaurant space.

Ms. West, is a multi-award winning, transgender performer, who proudly admits to having had her “second puberty” at age 40.  She first appeared on the Chicago cabaret scene in 1991 with her show, “A Taste of Honey.” She has won two After Dark Awards as Chicago’s Outstanding Cabaret Entertainer, among other honors.  But even though she refers back to her earlier self on occasions, not once did I ever think of her as anything other than one of the most talented and charismatic women on any cabaret stage.

The Venus Cabaret will not open formally until September. But on July 10 and 11, a steady stream of talented Chicago performers performed in a free “open house” to introduce the room, including Ms. West, to their public.

Despite my long history in Chicago, this was the first time I had seen Ms. West in her 30 year Chicago cabaret career.  I’m sorry now that I waited so long to catch her. I was transfixed for every second of both sets she performed.

Ms. West has the sly sexiness of Mae West, the chutzpah of Sophie Tucker, the bawdiness of Belle Barth (about whom she has performed a one woman show), and a warm, expressive, well honed singing voice which is all her own.

If cabaret gets knocked for anything, it’s because so many cabaret performers are more well meaning than well trained.  Not so with Ms. West. Genuinely warm and cheerfully self-effacing, she rules the room with both her vocal talents and her big heart. As a great cabaret performer should, she frames her choice of material with stories of her life, which make us feel like friends in her living room. The video accompanying this articles captures some of the highlights of the evening.

The Venus Cabaret itself is a spacious room, which avoids the overstuffed feeling of some other places, yet which still feels perfectly intimate. The bartenders, who are off to one side as they are at Birdland Jazz Club, could make it a point not to shake drinks with ice during quiet moments of performance.  But other than that, this place, and the audience experience, is lovely.

Most cabaret rooms limit themselves to singers. But Ms. West has ambition to change things up, with comedy one night and novelty acts like belly dancers on other nights as well.  It’s hard to predict whether or not audiences in Chicago will support such a variety of interests. But if anyone has what it takes to to pull off a room like this, it’s Honey West and the Mercury Theater team.