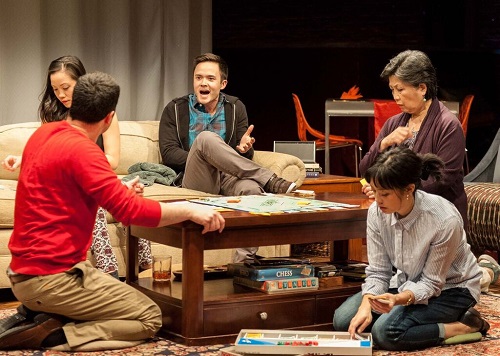 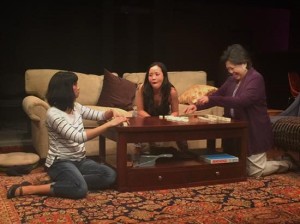 Ma-Yi Theatre Company‘s world premiere of A. Rey Pamatmat House Rules brings up so many issues. It centers on two Filipino-American families struggling with the loss of their parents, identity and ethnicity. Their parents’ traditions are no longer their own, yet they are more bonded than they realize. 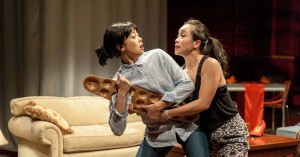 The families are neighbors in the same apartment building. Family one consists of Ernie (Jojo Gonzalez) a tough-as-nails father who is in the hospital after a series of heart attacks and his sons, Rod (James Yaegashi), a gay physician and JJ (Jeffrey Omura), a comic book artist. Rod’s ex-boyfriend Henry (Conrad Schott), has just broken up with him after just asking him to marry him due to the pressure of his father’s impending death. Family two has Vera (Mia Katigbak) as the one making the house rules. She is a no-nonsense mother and her daughters, Momo (Tiffany Villarin), a doctor and Twee (Tina Chilip), a budding photographer. Here sibling rivalry, uncertain lovers and responsibility stare each in the face. 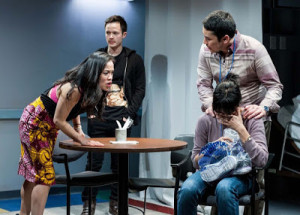 During the course of the play, where the set by Reid Thompson is reminiscent of a game board, the characters not only play regular board games (gin rummy, mah-jongg), but they indulge in a lot of head games. Ralph B. Peña’s direction keeps this game going at a fast paced clip.

The cast is uniformly good with Ms. Katigbak getting some of the best lines.

Mr. Pamatmat’s script is witty, with fleshed out characters. By the end of the play we not olny know who these people are but we can relate to at least one of the issues brought forth.

There is a lot of truth in this play.

Suzanna BowlingJanuary 24, 2023
Read More
Scroll for more
Tap
Head of Passes Knows Nothing About Faith
Cagney Wins Over This Critic