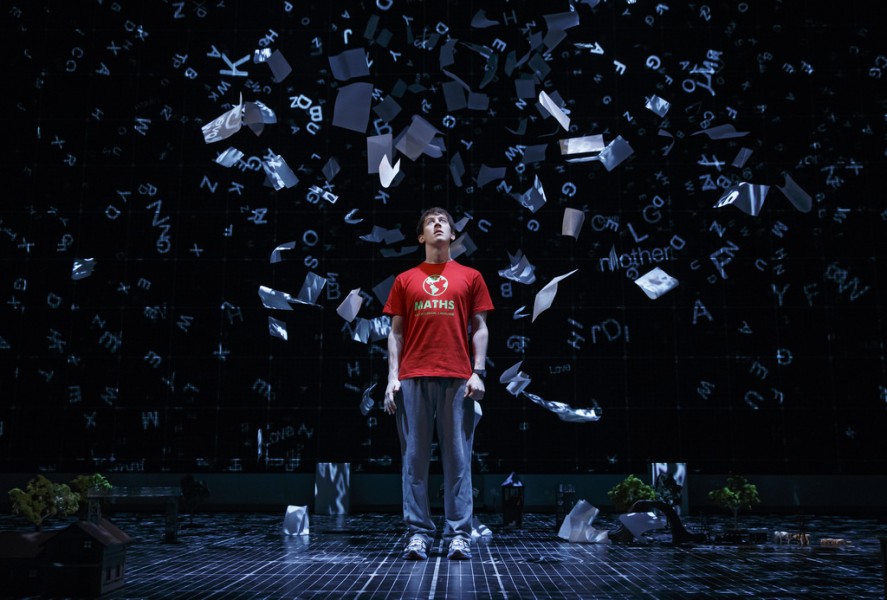 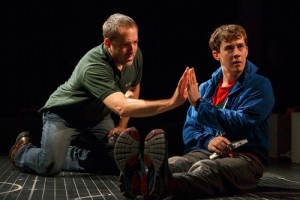 When I first heard about The Curious Incident of the Dog in the Night-Time, the Olivier Award-winning play now at the Ethel Barrymore Theatre,  I just didn’t see how a play about an autistic boy with Asperger’s could wow. The answer to that is the direction by Marianne Elliot, the choreography by Scott Graham, the production design by Bunny Christie and the video design by Finn Ross is remarkable and innovative. Add to that Alex Sharp’s debut performance as the 15-year-old autistic English boy out to solve a mystery and you have spectacular theatre.

The story is semi predictable but it is the way that it is told that is unique. When the neighbor’s dog is killed and Christopher (Sharp) is blamed, he sets out to solve the puzzel. The dog’s death is just the tip of the iceberg for what is behind the secrecy. As layers are lifted it is not Christopher who is the one who is disabled but his parents, a loving father (Ian Barford) and a mother (Enid Graham) who could not cope with the burdens of a son who refuses to make eye contacted and hates to be touched. His teacher (Francesca Faridany) supplies the boy with a world he can grasp of mathematics and maps. Here he excels.

Mark Haddon’s book and Simon Stephens’ adaptationshow a world few of us enter. The set is a grid that is Christopher’s mind. Through that we see how he thinks and for most of us it is an assault on the senses. In this play everybody involves is at the top of their game.

I am counting on Tony nods for Elliot, Christie and Sharp as well as a Theatre World Award for Sharp and a Drama Desk nod for Ross as well.

Hint: stay sitting until after the curtain call. The best part comes right after that.

Like Equus, The Elephant Man and Children of a Lesser God theatre helps us see the world in way that allows compassion.

The Curious Incident of the Dog in the Night-Time: Ethel Barrymore Theatre, 243 West 47th St.