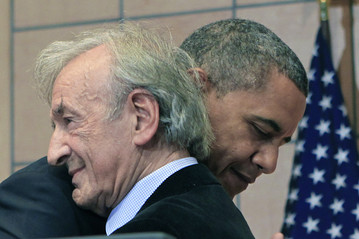 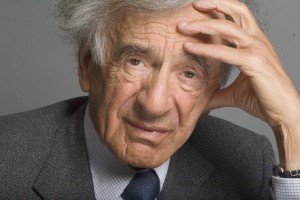 One of the most admired men in the world, Holocaust survivor, Nobel Peace Prize winner, touching author and outspoken activist Elie Wiesel has died. He was  87. Wiesel brought Holocaust education to the forfront offering hope for those in pain. His book “Night,” was his account as a teenager in prisoned in Auschwitz . 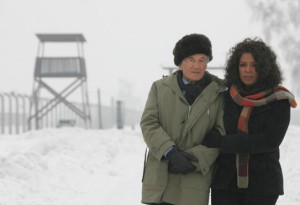 Eliezer “Elie” Wiesel was born on September 30, 1928 in the Romanian town of Sighet. His life and that of his family was rudely interrupted in 1940, when all the Jews in town were forced to move into one of two ghettoes. In May 1944, the Nazis, deported the Jewish community of Sighet to the Auschwitz-Birkenau concentration camp. The teenage Wiesel was sent with his father Shlomo to the Buna Werke labor camp, a sub-camp of Auschwitz III-Monowitz, where they were forced to work for eight months before being transferred to a series of other concentration camps near the war’s end. Shlomo Wiesel died after receiving a beating from a German soldier on January 29, 1945. Wiesel’s mother Sarah and younger sister Tzipora also perished in the Holocaust. His older sisters Beatrice and Hilda also survived.
In 1948, he studied at the Sorbonne, but never finished becoming a professional journalist. He covered the 1961 trial of Nazi war criminal Adolf Eichmann for the New York-based Yiddish newspaper The Forward.
Despite the traumatic impact the Holocaust had on his life, Wiesel did not write about those experiences until encouraged to do so during a conversation with French Nobel Laureate for Literature Francois Mauriac, in 1954. “Night” went on to sell more than six million copies. In 2006, Oprah Winfrey selected a new translation of “Night” by Wiesel’s wife Marion for her book club, helping to push the book to a top spot on The New York Times’ best-seller list for nonfiction paperbacks. The book now appears in 30 languages. “Night” would form the first part of Holocaust memoir trilogy that would include “Dawn” and “Day.” Wiesel went on to write more than 40 works of nonfiction and fiction. Wiesel took  Oprah on a well-publicized trip to Auschwitz. Three years later, he accompanied President Barack Obama and German Chancellor Angela Merkel on a trip to the Buchenwald concentration camp.
In 1955, Wiesel moved to New York to cover the United Nations. He was hit by a taxi and was required a prolonged convalescence in the hospital. Following his recovery, Wiesel applied for permanent residency and in 1963 became a U.S. citizen; this was the first citizenship he held since becoming displaced during the Holocaust. 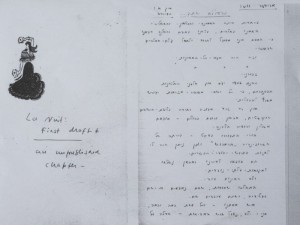 An original copy of Night

Wiesel  met his wife to-be, divorced Austrian Holocaust survivor Marion Rose, in New York. They married in Jerusalem in 1969. Marion served as the English translator for Wiesel’s subsequent books.
Wiesel received numerous awards and honors including the U.S. Presidential Medal of Freedom and the rank of Grand-Croix in France’s Legion of Honor. He was knighted as Commander of the Order of the British Empire. In 1986 he won the Nobel Peace Prize for his role in speaking out against violence, repression and racism. Wiesel was the recipient of over 100 honorary doctorates, and received France’s distinguished Prix Medicis for his 1968 book “A Beggar in Jerusalem.” In 2007, Israel’s Prime Minister Ehud Olmert  suggested nominating Wiesel as candidate for president of Israel on behalf of the Kadima party, but Wiesel declined.  Shimon Peres would later award Wiesel the President’s Medal of Distinction in 2013. When given the World Jewish Congress’ Theodor Herzl Award by former Secretary of State Hillary Clinton in 2013 Wiesel stated “There were two great men in Europe at that time: Herzl and Freud. Luckily they never met. Just imagine Herzl knocking on the door of Dr. Freud: ‘I had a dream.’ Freud would have said, ‘Sit down. Tell me about your mother.’”
From 1972 to 1976, he was professor of Judaic Studies at the City University of New York. He taught humanities at Boston University and Judaic studies at Barnard College of Columbia University from 1997 to 1999.
In 1978, U.S. President Jimmy Carter appointed him as chairman of the Presidential Commission on the Holocaust, a role in which he served until 1986. In that capacity, Wiesel became a major, driving force behind the establishment of the U.S. Holocaust Memorial Museum in Washington, “For the dead and the living, we must bear witness.” 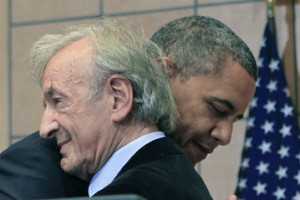 He and his wife established the Elie Wiesel Foundation for Humanity to combat intolerance and injustice around the world through dialogue in general, and via programs for youth. In 2012, Wiesel gave back the Grand Cross Order of Merit award he had received from Hungary in 2009, in protest of what he called the “whitewashing of tragic and criminal episodes.”  Wiesel was sadly one of the more prominent victims of Bernard Madoff’s Ponzi scheme. The Elie Wiesel Foundation for Humanity lost $15.2 million it had invested with Madoff, and the Wiesels lost their own life’s savings, reported to be around $1 million. The foundation later managed to raise about one-third of the money it lost to Madoff from sympathetic donors, and to continue to function. 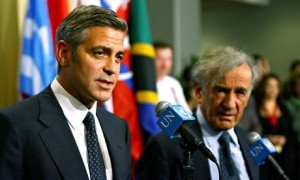 In September 2006, Wiesel appeared with  George Clooney before the UN Security Council to bring attention to the humanitarian crisis in Darfur. In 2007, the Elie Wiesel Foundation for Humanity issued a letter criticizing the denial of the Armenian genocide at the hands of the Ottoman Turks; it was signed by Wiesel and 52 other Nobel laureates. In 2010, he came out publicly against the Netanyahu government’s decision to deport 400 children of migrant workers from Israel. In April 2010, he took out advertisements in four major newspapers, criticizing the Obama administration for pressuring the Netanyahu government to halt construction in Jewish neighborhoods located across the Green Line in East Jerusalem. Wiesel repeated that tactic in 2013 when he took out a full-page ad in The New York Times calling on the U.S. administration to demand the total dismantling of the nuclear infrastructure in Iran because that country had called for Israel’s destruction. Until his death Wiesel fought for the rights of humanity.
Wiesel is survived by his wife Marion, their son Shlomo Elisha Wiesel, and his stepdaughter Jennifer and two grandchildren

This is a sad day for humanity, for there are some men who surpass what being a human means. Rest in peace.