How often does fear paralyze us? We get stopped in our tracks and make discussions, so as not to be hurt. Hundred Days, the new musical concert written by Shaun and Abigail Bengsons and Sarah Gancher, at New York Theatre Workshop attempts to take you through one women’s journey out of paralyzation. Done in the format of a song cycle, we learn that at age fourteen Abigail learned to live in fear, due to some kind of disaster. Moving to New York she meets Shaun Bengson over a meal at an Astoria diner. Due to a prophetic dream at 15, she knows she has met the love of her life and brakes up with her fiancé that night. For her second date, she moves in with Shaun, the next day. Shaun had a best friend who was to move into his apartment, but the two become inseparable. Three weeks laster they marry and are still happily married. They created a band called  The Bengsons, which they consider their family. 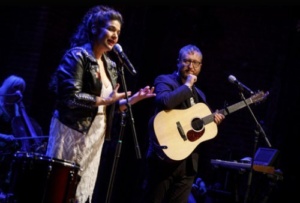 Through words and songs, this theatrical concert, weaves it’s way into your heart thanks to the superb directed by Anne Kauffman. The dream is that Abigail would marry the man of her dreams, who would die on the 100th day. The effects  sand falling counting the passage of time and the shadows that grow and go smaller thanks to the lightening by Andrew Hungerford. I also love the hanging light bulb effect. 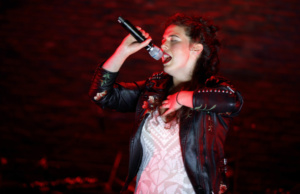 Abigail and Shaun Bengson perform playing multiple instruments. Their sound is folk-punk with blues and some soul thrown in. Abigail is charismatic with a Janis Joplin sound. Her pain rides on her voice like raw cuts. Shaun has a more subtle approach. His music speaks in the way he plays, though his voice has a soothing quality to it. 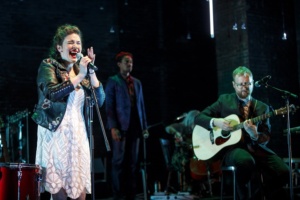 Their talented band consists of Jo Lampert ( I saw the talented Barrie McClain), a mean accordion player and a powerful singer, Reggie D. White who plays keys with soul, Colette Alexander a fabulous cellist and Dani Markham a phenomenal drummer, who act like a greek Chorus. The music is foot stomping, joyous and soulful. It reminded me of several concerts I attend in New Orleans.

The only problem I had with the show it was hard to figure out exactly what was the disaster that befell Abigail at 14. Also what exactly happened later on. I don’t want to give away the plot, but I did want to know, if they really live the way they say they do, so in the moment? Did they really stretch out time?Even the internet does not divulge these secrets.

Hundred Days and the Bengsons will make you believe in love. Give you a warm and fuzzy feeling and remind you life is to be lived to it’s fullest.

Suzanna BowlingMay 6, 2022
Read More
Scroll for more
Tap
Face To Face: Meet Iestyn Davies The Voice of Farinelli
He Says: Farinelli and the King: The Man and the Singer Heal a Monarch, Majestically.