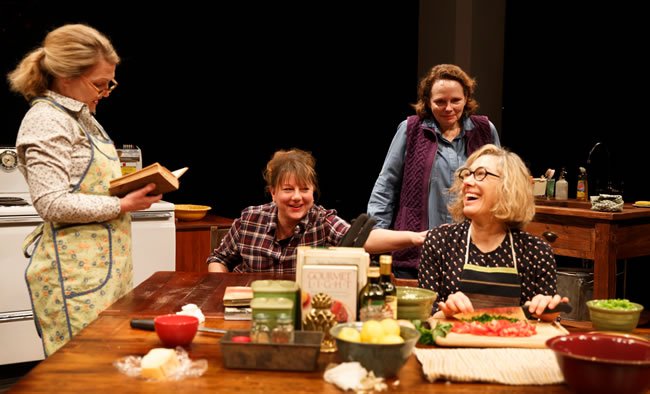 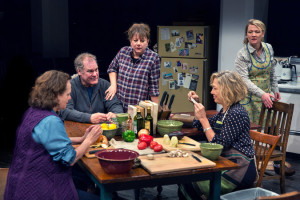 As a critic, I try not to know much information of a play before I see it. Ironically certain playwrights or actors keep consistently getting the same reactions, weather good or bad. Such is the case with Richard Nelson’s plays. I was not a fan of the “Apple Family Trilogy.” I find the actors to be wonderfully real and the plays to be such a bore, that it is an effort to not nod off as NOTHING happens. Before I was scheduled for Hungry now at the Public Theater, I did not know the playwright was Mr. Nelson until I got there. When I realized it, I hoped beyond hope that maybe, just maybe something would happen, other than sitting around a dinning room table. This time… same dinning table, different family, some of the same actors and this time they actually cook, bread, salad, spaghetti, ratatouille and Apple Brown Betty. At least it smelled inviting. 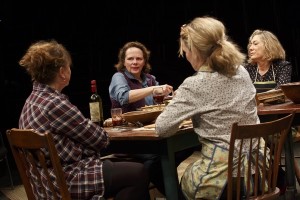 In Hungry: THE GABRIELS: Election Year in the Life of One Family, nothing much happens except, the conversations most people are having about this coming election. Again set in Rhinebeck, NY, The Gabriels, are natives to this area are feeling the political and affluential pull of the Democrats. After all The Clinton’s live up here. Even The Eleanor Roosevelt Museum is being used to sway people to vote Democratic. The family has gathered to scatter the ashes of Thomas and the family has reunited at his mother Patricia’s (Roberta Maxwell) house. Losing the capacity to live by herself, she has been moved into an assisted living facility. She had been sharing the house with Thomas and his wife Mary (Maryann Plunkett). Mary who has spent a long time caring for Thomas during his illness is ready to move on. His first wife Karin (Meg Gibson) has invited herself to the gathering and nobody has the heart to say no. His brother George (Jay O. Sanders) and his wife Hannah (Lynn Hawley) have also taken care of Patricia and his older sister Joyce (Amy Warren) is rarely in town.

We spend an hour and forty-five minutes in conversation about thee present state of the political circus. Trump,  preminitions of something awful happening, the wisdom of voting, or not, for Hillary blah, blah blah. No insight, no conflict, so nothing gets resolved. Honestly how is this a play? Where is the arc? Where is the emotional commitment? Where is the entertainment? To make matters worse, this is going to be another trilogy!

The good news is, this time I wasn’t frozen to death and I could actually understand the actors.

This play left me starving for something, anything and I was left unfulfilled.

Hungry: THE GABRIELS: Election Year in the Life of One Family:  The Public Theater, 425 Lafayette St. until April 3rd.