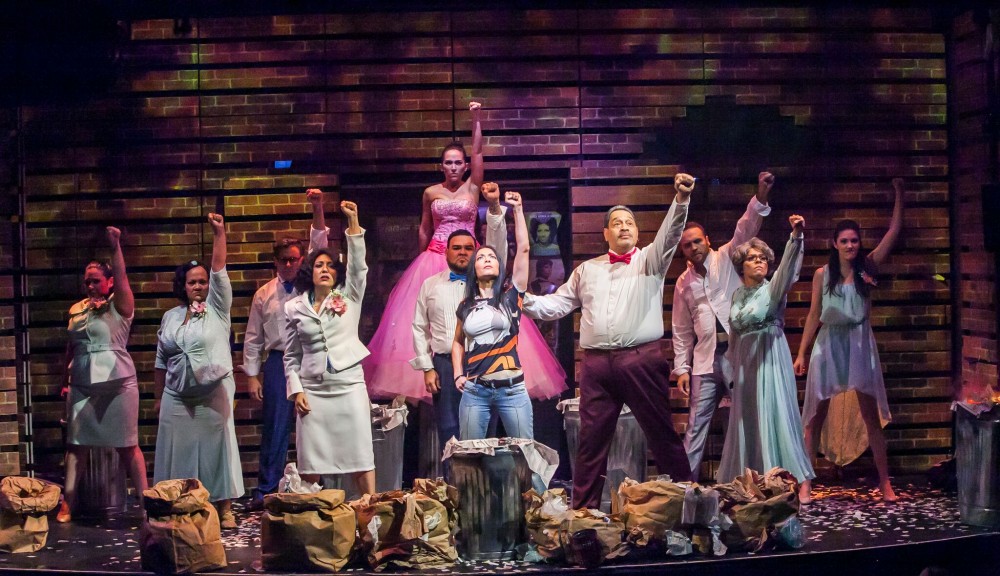 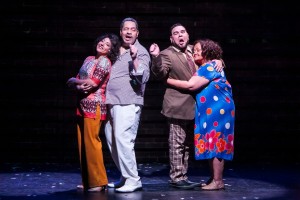 Over at the Puerto Rican Traveling Theatre, is a show that has Latinos’s acting like a rock concert just came into town. The world premiere of I Like It Like That is a jukebox musical, that is three quarters hispanic with enough Salsa to spare. Starring Tito Nieves,  the Pavarotti of Salsa I Like It Like That is named after the Manny Rodriquez hit that Nieves covered in the mid-’90s for a Burger King commercial. It is the perfect fare for our Spanish speaking audiences who miss their culture. 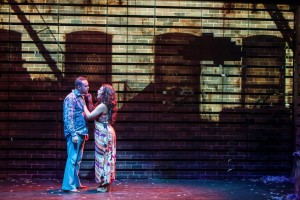 The story is just one of many in the life of the people in El Barrio, otherwise known as Spanish Harlem. For those of you who don’t know of the history of New York in the 60s, their  a radical Puerto Rican nationalist group known as the Young Lords. Starting in Chicago, the Young Lords expanded to New York City in 1969, when a group of young New Yorkers, inspired by the Black Panthers, sought to create something similar for the city’s Puerto Rican community. The residents of Spanish Harlem, were concerned over the trash not being collected. The Department of Sanitation was virtually ignoring the area, and garbage was piling up. So the Young Lords began cleaning up by dumping it and setting it on fire. I Like It Like That takes place during this time as Roberto (Tito Nieves) is trying to take care of his family. He owns a record store, where he lives with his wife, Carmen (Shadia Fairuz), and their four children: Juan (Gilberto Velázquez), China (Caridad De La Luz), Carlos (Joseph “Quique” González), and Paula (Sophia Klimovsky, the night I saw the show). As the garbage piles up, Juan is framed by his girlfriend the beautiful and money climbing Maria Luis (Chichi Del Valle) and is sent to prison, China joins the Young Lords, as Carlos seeks to get out and Paula is getting ready for her quinceañera. The neighbors Tita (Rossmery Almonte) and Vietnam veteran Rafa (Angel López) fall in love much to everybody’s surprise as life is a series of dancing, music, block parties and blackouts, keeping them bonded and a community. 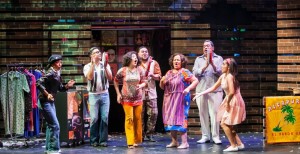 The score is infectious with a vocal power house of a cast. Each one sings better than the next. The fabulous seven piece band is led Desmar Guevara and the audiences reaction to the songs they know and love is infectious. If you read the bios it is like a whose who in the Latino recording industry. The show has numbers by Tito Puente, Eddie Palmieri and Ruben Blades, but adds in original music as well by Waddys Jáquez who also directed, coauthored the book and choreographed the show’s energetic dances. This is where the show does’t exactly succeed in a commercial theatre non Latino kind of way. The book is flimsy and the choreography energetic but simplistic. David Maldonado’s bio, looks more towards the music side which is why, the music excells. By adding so much information and subject matters and not expanding on one nothing is fully fleshed out. This is the problem with most Jukebox musicals. The story is suited to add the numbers and not to drive the plot. What we miss is the backstories. However what we do get is the sense of family and love of where they come from.

Nieves is a powerhouse both in voice and in acting. Lopez and Almonte gives us the comedic humor but also have solid voices that rival any of their younger counter parts. Velazquez simmers in sex appeal and voice. Chachi Del Valle plays three roles, but when she plays the singer in a club and rocks out “El Carbbonero,” she knocks it out of the park and you know this girl is a star. This show should have an album and I could see this being developed into a TV Show.

Since this is three quarter in Spanish, and I did not know “El Barrio,” it was hard to get the references, the inside jokes or any of the jokes. Thankfully the English lyrics are projected onto the set by projection designer Rocco Disanti, but after awhile you just give up and feel the groove and go with the flow. Scenic designer Raul Abrego does remarkably well creating in such a small space.

I am thrilled that the Latino community has a show that they can call there’s. Their enthusiasm and spirited approval was contagious and you know what? I Like It Like That!

Suzanna BowlingJanuary 23, 2023
Read More
Scroll for more
Tap
Aisle Say On The Square: The Grim Future Ain’t What It Used To Be
Naperville – Doubleshot of Fun