I Spy A Spy Brings The Cold War Back 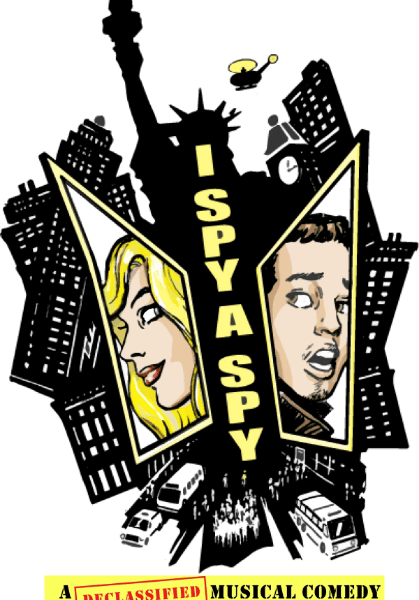 I Spy A Spy Brings The Cold War Back

In an age of ICE I Spy A Spy opening tonight at Theatre at St. Clement’s brings heart, a socio-political immigrant storyline and one fabulous performer in the name of Andrew Mayer. Yes, Mr. Mayer, we see you! Playing José Rodriguez, an undocumented Mexican worker, Jose longs to be an actor, but instead works three jobs, one as the Statue of Liberty in Times Square. Longing to be seen, he is ignored by society. Mr. Mayer brings to mind a young Lin Manuel Miranda.

Jose is in love with an undercover Russian spy Alina Orlova (a lackluster performance by Emma Degerstedt), whose father Cold Borscht (Bruce Warren, in a hysterical performance) wants her to follow in the family business of spying. Alina who doesn’t want to be seen, is seen by everybody. She is desperate to become a spy like her father, so a russian hacker (John Wascavage), will not deport them to Siberia.

Jose works for two deli owners Korean Sunny Park (Hazel Anne Raymond), and Pakistani Abdul Mahkddom (Sorab Wadia, also very funny), who continuously spy on each other instead of dealing with their mutual attraction, which ends with them in hot water.

To convolute matters is Prisciliana Espinoza (Nicole Paloma Sarro) a Mexican coyote who is extorting enormous amounts of money for helping Jose get to America. When Alina instead of Jose wins the new face of New York, Prisciliana kidnaps and blackmails Alina telling her to sell her “Natural Assets”.

In order to help Alina, Jose, due to his not being seen, ends up the perfect spy and becomes an American citizen. All’s well that ends well.

Set in Hell’s Kitchen during the summer of 2019, it would have made more sense, if Jamie Jackson (book and lyrics) and SoHee Youn (book and music) had set I Spy A Spy in the 40’s or 50’s during the cold war. If so they could have played off the musical influence and film noir aspects. Many of the jokes set in the present, just seem PC incorrect or insensitive. Calling women “Fresh Meat” or telling anyone to sell their bodies for cash is a little crass.

In terms of music the best song is “Only A Russian” which brings to mind Silk Stockings. Most of the songs are generic, yet perky.

Bill Castellino’s direction and choreography, as well as the musical direction by Dan Pardo, keeps this 2 hour and 20 minute show moving and well sung.

James Morgan’s cartoonish set keep the fun in the show and it is a shame the writers did not follow his lead.

I Spy A Spy is lite summer fare with talent in Mayer, Warren and Wadia that is worth checking out.

Suzanna BowlingJanuary 15, 2022
Read More
Scroll for more
Tap
Broadway in Bryant Park With Beetlejuice, Waitress, Chicago,Jersey Boys and Come from Away
Brian Cox To Play Lyndon B. Johnson in The Great Society